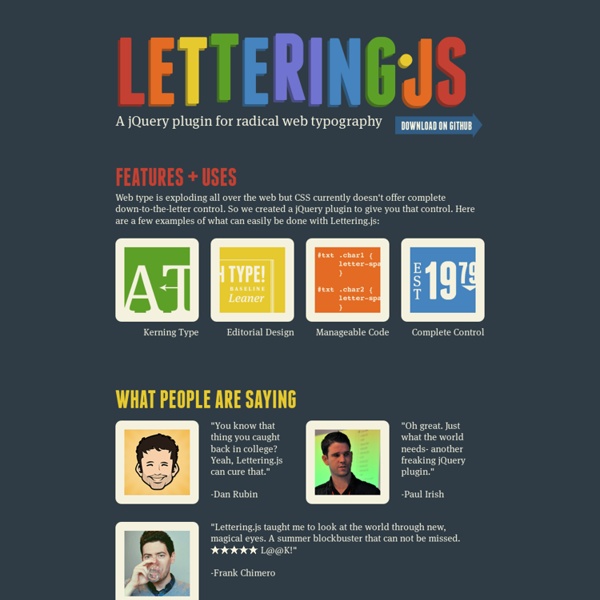 Features + Uses Web type is exploding all over the web but CSS currently doesn't offer complete down-to-the-letter control. So we created a jQuery plugin to give you that control. Here are a few examples of what can easily be done with Lettering.js: Kerning Type Editorial Design

40 website designs with unusual navigation Hands down, navigation is the most crucial part of a website’s design. Without a thoughtful navigation, users won’t be able to find their way around. In fact, they’ll just leave. That being said, there’s no reason to limit your navigation to a boring bar across the top of the page. You can still be creative while being functional. 23 Free, Vector Icon Packs for Social Media It's massive freebie time again! We've rounded up a huge collection of social media icons in, you guessed it, vector format. These designs are simple, clean, and versatile. They're easy to integrate into your next app, interface, blog, web design, or anything you have in the pipeline that needs to connect via social networking. There are multiple unique pack designs, and hundreds of free vector icons to grab a hold of. Now's the time to download these freebies, so get to it.

tubular, a YouTube Background Player jQuery Plugin Video controls:Play | Pause | Volume Up | Volume Down | Mute Tubular is a jQuery plugin that lets you set a YouTube video as your page background. Just attach it to your page wrapper element, set some options, and you're on your way.

How to Create Content Maps for Planning Your Website’s Content Content mapping is a visual technique that will help you organize and understand the content of a website. It can be a simple and valuable part of your site’s overall content strategy. This short and simple guide should help you get started. What is Content Mapping? 35 Beautifully Designed Websites With Eye-Catching Photo Backgrounds Advertisement Web design is taking a plunge into photography and digital arts. Making large photos as a background is getting trendy. Hence, putting up a catchy photo never misses to attract the audience attention. Upon researching this article, the surprising thing was that this type of background does not seem to have any limitations; it is equally suited to ecommerce sites, restaurant sites, web design agencies.

15 Desktop & Online Wireframing Tools Like most things today, the world of interaction design moves quickly. Although a pen and notebook may suffice when it comes to simply jotting down ideas, planning a series of website screens can sometimes demand additional precision and cohesion. This is where today’s wireframing tools come in. Engineered to make the design process as intuitive as possible, these tools allow you to construct a visual representation of your interface. Some even allow designers to construct interactive prototypes in order to receive user feedback before a single line of code is written. The following list comprises 15 of the most prominent wireframing applications available today. tiltShift.js - a jQuery plugin using CSS3 filters to replicate the tilt shift effect download Download here or go to github. Released under GPL how to use

URL encode (text conversion tool) On 16. Sep 2010 09:11 butzi wrote: @andreas: It is not as easy as it looks like. But i am planning an improvement, that will work for you in the next month. On 13. Sep 2010 09:46 ab-tools wrote: 22 Wonderful Google Blogger Templates for Free Download at DzineBlog Learn how to earn $125 or more per hour as a freelancer - Click Here Looking for hosting?. We recommend MediaTemple for web hosting.

10 Free Wireframing Tools for Designers This series is supported by Ben & Jerry's Joe, Ben & Jerry's new line-up of Fair Trade and frozen iced coffee drinks. Learn more about it here. Wireframing is a crucial step in web design and development as it allows for rapid prototyping and helps to pinpoint potential problems early in the process. It can be invaluable to have a visual representation of content, hierarchy and layout. Wireframes make it easier to communicate ideas, reduce scope creep, cut down on project costs (due to fewer design revisions later), and enable greater upfront usability and functionality testing. jQuery plugin for Avgrund concept popin Avgrund is a jQuery plugin for modal boxes and popups. It uses interesting concept showing depth between popup and page. It works in all modern browsers and gracefully degrade in those that do not support CSS transitions and transformations (e.g. in IE 6-9 has standard behavior). Tested with jQuery 1.4+, file size is under 2Kb, MIT Licensed. You can simply init Avgrund with one line and linking 'avgrund.css' file: $('element').avgrund();