16 Pixels: For Body Copy. Anything Less Is A Costly Mistake - Smashing Magazine 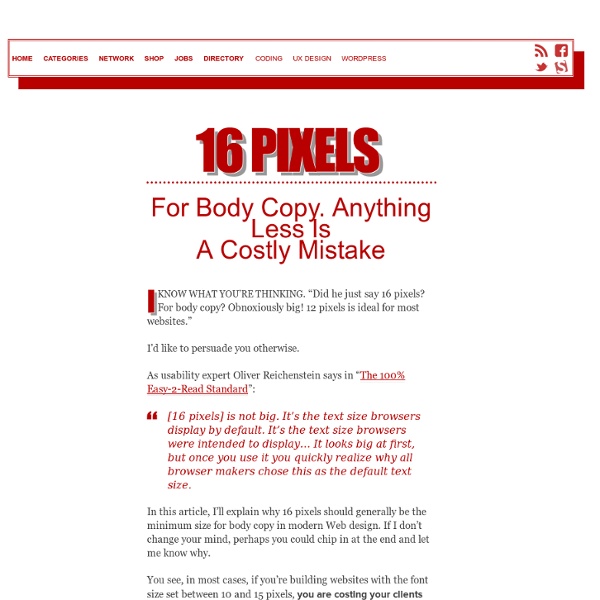 16 Pixels: For Body Copy. Anything Less Is A Costly Mistake Advertisement I know what you’re thinking. “Did he just say 16 pixels? For body copy? I’d like to persuade you otherwise. As usability expert Oliver Reichenstein says in “The 100% Easy-2-Read Standard1”: [16 pixels] is not big. In this article, I’ll explain why 16 pixels should generally be the minimum size for body copy in modern Web design. You see, in most cases, if you’re building websites with the font size set between 10 and 15 pixels, you are costing your clients money. Readership = Revenue If you’re building a website for someone — even yourself — chances are its purpose is to make money. Perhaps it’s to sell a product directly, or to offer a service, or just to generate leads. So, every element should be designed to achieve that goal. Think about it. Important Facts About Reading At age 40, only half the light gets through to the retina as it did at age 20. Fact: Most Web Users Hate The “Normal” Font Size “But Users Can Zoom”

Introducing The 6 + 1 Model For Effective Copywriting (Better Than AIDA!) - Smashing UX Design Advertisement AIDA. Attention, interest, desire, action. It’s the classic copywriting formula, studied and used by almost every copywriter on the planet. Well, I’m not a fan. Not because it isn’t accurate, and not because it doesn’t work. If your writing isn’t doing these things, however, then I don’t think AIDA will help you very much, because it doesn’t do enough to explain how to do any of these things. The best way to learn is by example, so let’s look at a promotional failure and see how it conforms to AIDA but still doesn’t work. (Image source: alt10401) Text-Message Loan Sharking? I recently received a text message from a number I didn’t recognize. Coming up short between pay-days? (Image: someToast2) Now, obviously, I didn’t text back the anonymous sender with a “Yes.” I was unimpressed before; this sealed the deal! Let’s see how this piece of marketing stacks up on the AIDA scale: A for attention Sure, the text message got my attention. What Was Missing? A Better Model: 6 + 1 (al)

Simple Genius: A Desk That Grows With Your Kid | Co. Design Kids grow. Their belongings do not. Which sucks for parents who could be spending dough on a hot new car college fund but instead have to buy new shoes, bedroom furniture, and the like every time their offspring sprouts a few inches. Enter the AZ desk. Clever, right? [Images courtesy of Guillaume Bouvet] The Do's And Don'ts Of Infographic Design - Smashing Magazine Advertisement Editor’s Note: You might want to read Nathan Yau’s article The Do’s And Don’ts Of Infographic Design: Revisited1 here on Smashing Magazine which is a response to this article. Since the dawn of the Internet, the demand for good design has continued to skyrocket. Infographics are visual representations of information, or “data viz” as the cool kids call it these days. Of course, just as Web 2.0 changed 1.0, today’s infographics are far more eye-catching than simple pie charts and bar graphs. While some design trends come and go, infographics are here to stay. Wrapping Your Mind Around Data Viz Designing an infographic is not the same as designing a website, flier, brochure, etc. Show, Don’t Tell A rule of cinema is to show, don’t tell. 4This Twitter infographic writes out the data, rather than visualizing it. What’s wrong with this infographic? If the Client Wanted an Excel Chart, They Wouldn’t Need You It might sound harsh, but it’s true. Typography Should Not Be a Crutch (al)

Is Fireworks better than Photoshop? Web Safe Fonts - A Tutorial What Are Fonts? Even if you've never hear the term Font before, I'm sure you've seen different fonts all over. As defined by Webster's, a font is: (Print.) Already on this page you've seen two separate fonts ( a Sans-serif Font [probably Arial] and a Serif Font [probably Times New Roman] ) and several variations of each ( bold, italic, large ). Why Use Fonts? Fonts can be used to give printed material a uniform look and feel. In today's world of mass information and intense visual stimulation, fonts are a very important part of conveying information, emotions, and ideas. Take for example these two boxes for the Web 2 Market Quick Order Module for AbleCommerce. Or how about these two graphic of a party invitation. So What's This Have To Do With A Web Site? You might be asking yourself that very question. The problem arises because other people might not have the same fonts installed on tehir computer that you do. or . . This can really wreak havoc on how your page appears. But remember. OK.

Rapid Fire #1: Photo-Realistic « SixThings Make your digital images more convincing and lifelike with just a handful of gradients and custom shadows. Once you’re done, your pictures will look like real photo prints, you’d swear they popped out of the screen. Note 1: This is the first issue of Rapid Fire, a series of tutorials aimed at intermediate and advanced users of Macromedia Adobe® Fireworks®. I’ll be demonstrating some tips and tricks that take advantage of Macromedia Adobe® Fireworks®’ vector tools and Live Effects. No schedules are planned for subsequent releases, so I’ll just post my tutorials as I finish them. Note 2: This tutorial was done in Macromedia Adobe® Fireworks® 8, and requires knowledge of gradient fills and Pen Tool usage. Update 2006-03-10: Thanks to simonline and Greg for pointing out that the Average blend mode can be substituted with a decrease in opacity. Update 2006-09-20: Thanks to Uriel, this tutorial is now available en español! Setting Up The Photo First, we create the base photograph.