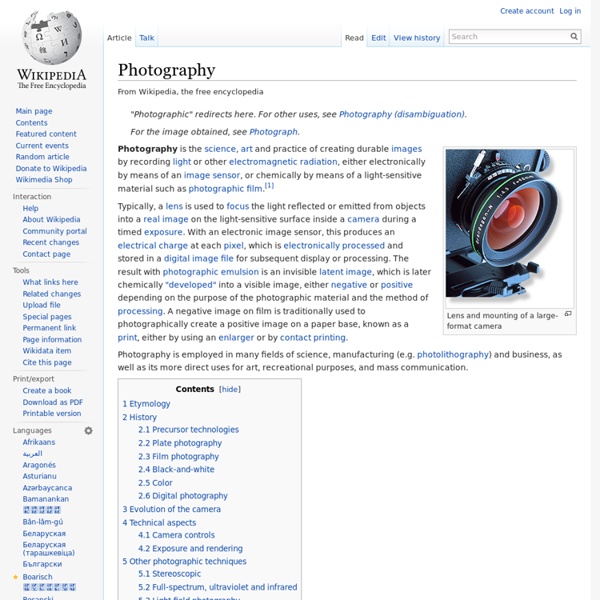 For the image obtained, see Photograph. Lens and mounting of a large-format camera Photography is the science, art and practice of creating durable images by recording light or other electromagnetic radiation, either electronically by means of an image sensor, or chemically by means of a light-sensitive material such as photographic film.[1] Photography is employed in many fields of science, manufacturing (e.g. photolithography) and business, as well as its more direct uses for art, recreational purposes, and mass communication. Etymology[edit] The word "photography" was created from the Greek roots φωτός (phōtos), genitive of φῶς (phōs), "light"[2] and γραφή (graphé) "representation by means of lines" or "drawing",[3] together meaning "drawing with light". Several people may have coined the same new term from these roots independently. History[edit] Precursor technologies[edit] A camera obscura used for drawing images Photography is the result of combining several technical discoveries.

Image Conscious - Free Online Graphic and Web Design Tools A comprehensive collection of free online tools and resources that virtually anyone can use to enhance their creative design projects either at work or home. Find, explore and share useful web services for building better blogs, portfolios, social media profiles, and professional websites. Discover free online image applications and inspirational visual media you can use in your own creative projects. Image Conscious focuses on web-based design tools to help you create and manage your online presence and profile. It includes information to help you build brand awareness and develop your digital identity.

30 Breathtaking Examples of Bokeh Photography The term Bokeh comes from a Japanese word that means “blur”. In photography, it’s used to describe the blur or the quality of the blur in the out-of-focus regions of an image. This can be achieved by taking pictures with a shallow depth-of-field. Bokeh is most noticed when points of light or highlights are part of the blur. Illustration Illustrations are often carried out as a large-scale industrial process, and is an essential part of publishing and transaction printing. People strolling by the banks of the River Thames. Illustration beats explanation. Western Engraving & Colortype Co. History[edit]

The Most Important Developments in Photography In my last article I listed the three most important developments in photography. Then someone pointed out that I’d made an error. I mean, I may have misspoken. JR Projects Since 2014 Since 2011 Since 2008 Since 2009 28 Millimeters 2008 - 2010 28 Millimeters 2007 28 Millimeters 2004 - 2006 2001 - 2004 Since 2009 Spectacular Examples of Colorful Photography Spectacular Colorful Images “A Picture of many colors proclaims images of many Thoughts.” Today i have gathered the colors in life in form of photographs. Some of the most amazing and spectacular examples of colorful images.

Painting Painting is the practice of applying paint, pigment, color or other medium[1] to a surface (support base). The medium is commonly applied to the base with a brush but other implements, such as knives, sponges, and airbrushes, can be used. Paintings may have for their support such surfaces as walls, paper, canvas, wood, glass, lacquer, clay, leaf, copper or concrete, and may incorporate multiple other materials including sand, clay, paper, gold leaf as well as objects. In art, the term painting describes both the act and the result of the action. However, the term is also used outside of art as a common trade among craftsmen and builders. Elements[edit] Conscientious Photography Magazine I frequently run into being asked by photographers how they can become better at writing about their own work. This is not an easy topic to talk about, certainly not without using specific examples. But I thought I’d do so anyway, in the hope that those who are interested in it might get something out of it.

App removes wandering people from photos The Remove app is designed to remove bystanders from photos taken by mobile devices Image Gallery (3 images) It's kind of a funny thing, when you think about it ... even though it's normal to see other people milling about in public places, when we take photos of those places, we often don't want any of those people in our pictures.