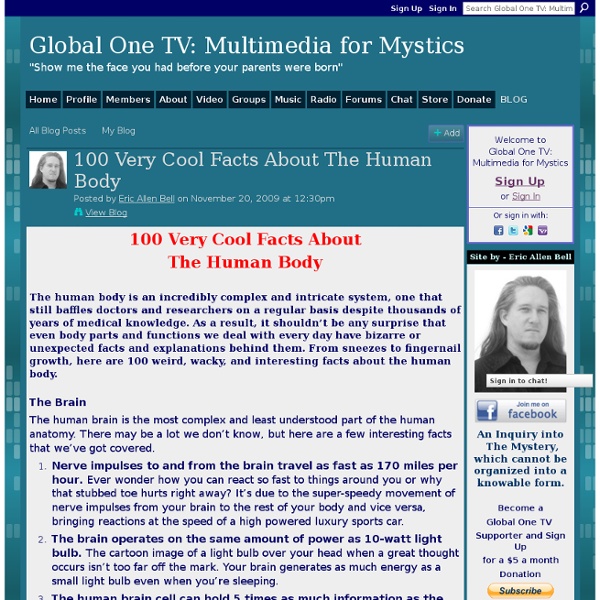 The Brain The human brain is the most complex and least understood part of the human anatomy. There may be a lot we don’t know, but here are a few interesting facts that we’ve got covered. Nerve impulses to and from the brain travel as fast as 170 miles per hour. Ever wonder how you can react so fast to things around you or why that stubbed toe hurts right away? It’s due to the super-speedy movement of nerve impulses from your brain to the rest of your body and vice versa, bringing reactions at the speed of a high powered luxury sports car.The brain operates on the same amount of power as 10-watt light bulb. Hair and Nails While they’re not a living part of your body, most people spend a good amount of time caring for their hair and nails. Facial hair grows faster than any other hair on the body. Internal Organs Though we may not give them much thought unless they’re bothering us, our internal organs are what allow us to go on eating, breathing and walking around. Bodily Functions Senses

Browse Symptoms & Points » Acupressure Guide Online » PointFinder Items marked (M) indicate likely need for medical attention Items marked (EM!) indicate potential need for emergency medical attention. For these symptoms, only use acupressure to supplement professional medical care, or when no professional medical care is available. Interesting Trivia?! & Matt's Notes - StumbleUpon When you’re finished reading, check out the new trivial posts: More Interesting Trivia and Even More Interesting Trivia. Mum sent me this so it has to be true – right? Here are some ‘facts’ about the 1500s: They used to use urine to tan animal skins, so families used to all pee in a pot & then once a day it was taken & sold to the tannery…….if you had to do this to survive you were “Piss Poor” But worse than that were the really poor folk who couldn’t even afford to buy a pot, they “didn’t have a pot to piss in” and were the lowest of the low. Most people got married in June because they took their yearly bath in May, and they still smelled pretty good byJune.

Daily Prayer 2012-12-28 Awareness of the Presence of God If someone asked you to give them another word for 'God', you could use the word 'Presence', for that is what God is. When Moses asked Yahweh his name, Yahweh replied, 'I am who am' and this means 'I am present'. The 8 Splendid Truths of Happiness In my study of happiness, I’ve labored to identify its fundamental principles. Because I get a tremendous kick out of the numbered lists that pop up throughout Buddhism (the Triple Refuge, the Noble Eightfold Path, the Four Noble Truths, the eight auspicious symbols), I decided to dub these fundamental principles as my Eight Splendid Truths. Each one of these truths sounds fairly obvious and straightforward, but each was the product of tremendous thought.

Science’s 10 hottest fields Understanding the genome The sequencing of the 6 billion chemical “letters” of human DNA was completed in draft in 2000 and in final form in 2003. But clinical benefits have arrived more slowly than the initial hype suggested. This is mainly because the human genome actually works in a much more complex way than predicted by the late-20th-century model. Twenty-first-century research shows that we have only 21,000 genes, one-fifth of the number predicted when the project started, and that just 1.5 per cent of the genome consists of conventional protein-coding genes.

Quantum Contemplation “I have said, Ye are gods; and all of you are children of the most High.” This is a long, and at times wordy post… but I am working towards a point, and I hope you will endure until that point is made! There is a great deal of literature out there that compares the findings of contemporary physics with that of non-dualistic philosophy, particularly with the contemplative traditions of the world’s religions. Many times these texts seem intent on establishing the case that science is validating the claims of religion. Almost as if contemplative spirituality is validated because science said so. I do not find this sort of comparison to be of any real value.

Definitions of Sciences and Studies Sciences and Studies This list defines 633 sciences, arts and studies of various degrees of respectability and rarity, ranging from the common and esteemed (chemistry) to the obscure and quirky (peristerophily). Over the past century, the range and scope of scientific endeavours has expanded exponentially, so that practically any field of study has a name associated with it. IBM: 'We must build an Exascale computer before 2024' (video) From Big Bang to Big Data: ASTRON and IBM Collaborate to Explore Origins of the Universe - Partners to research the exascale computer systems that are needed for what will become the world's largest radio telescope - Initial 32 million EURO, five-year collaboration will materialize in Drenthe, the Netherlands at the newly established ASTRON & IBM Center for Exascale Technology - System will be targeted to investigate high performance technologies required to read, store and analyze one exabyte of raw data per day, two times the entire daily traffic on the World Wide Web Drenthe, the Netherlands and Zurich, Switzerland, DATE: ASTRON, the Netherlands Institute for Radio Astronomy and IBM (NYSE: IBM) today announced an initial 32 million EURO, five-year collaboration to research extremely fast, but low-power exascale computer systems targeted for the international Square Kilometre Array (SKA).

GoodKnitKisses Beginners needle knit series overview video only. Learn how to knit in this beginners knitting series on basic needle knitting techniques and stitches. Check for links below to learn how to cast on, knit, purl, bind off or cast off, & check gauge. Happy Knitting!

japanese garden in portland photo Random photo Submit your photo Stumble Thru nature photography Ani – Ghost City of 1001 Churches Ani – some call it the City of 1001 Churches, others the City of Forty Gates. Yet no one has called it home for more than three centuries. Abandoned by its once prosperous and powerful inhabitants, it is situated on the Turkish side of a militarised zone between the border of Turkey and Armenia. The city of Ani is no stranger to death, destruction and desertion. It is a ghost city today but once its Armenian inhabitants numbered close to 200 thousand.