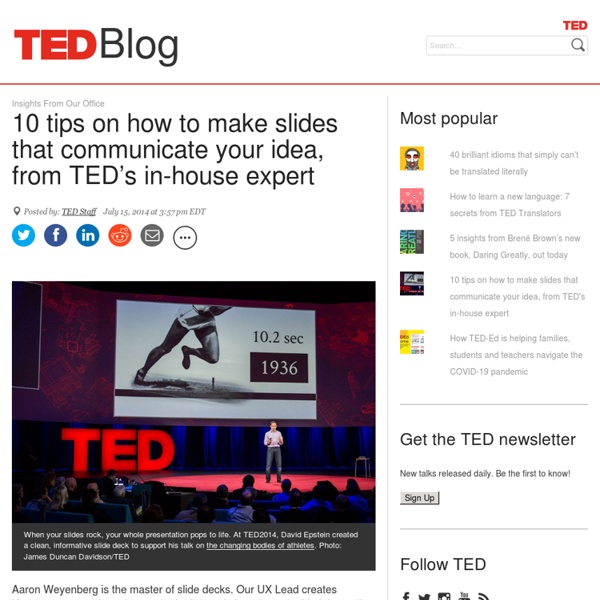 When your slides rock, your whole presentation pops to life. At TED2014, David Epstein created a clean, informative slide deck to support his talk on the changing bodies of athletes. Photo: James Duncan Davidson/TED Aaron Weyenberg is the master of slide decks. Our UX Lead creates Keynote presentations that are both slick and charming—the kind that pull you in and keep you captivated, but in an understated way that helps you focus on what’s actually being said. He does this for his own presentations and for lots of other folks in the office. We asked Aaron to bottle his Keynote mojo so that others could benefit from it. Aaron used this image of a New Zealand disaster to kick off a slide deck from TED’s tech team — all about how they prepares for worst-case scenarios. The big picture… Think about your slides last. And now some tactical tips… Go easy on the effects and transitions. Lastly, I’d love to leave you with a couple book recommendations. Happy slide-making.

10 talks you won't be able to stop thinking about Now playing Here's a TED first: an animated Socratic dialog! In a time when irrationality seems to rule both politics and culture, has reasoned thinking finally lost its power? Watch as psychologist Steven Pinker is gradually, brilliantly persuaded by philosopher Rebecca Newberger Goldstein that reason is actually the key driver of human moral progress, even if its effect sometimes takes generations to unfold. The dialog was recorded live at TED, and animated, in incredible, often hilarious, detail by Cognitive. 6 Presentation Mistakes Every Professional Should Avoid “There’s this one guy at my company who…” So began my in-flight conversation about presentations and presentation mistakes. This happens a lot. The surprising thing about this conversation was the rest of the sentence. “…is way too exuberant when he presents.” Wait, what?

50 Questions To Promote Metacognition In Students 50 Questions To Help Students Think About What They Think by Lisa Chesser Using the right questions creates powerful, sometimes multiple answers and discussions. Aristotle said that he asked questions in response to other people’s views, while Socrates focused on disciplined questioning to get to the truth of the matter. 18 Rules for Using Text [Infographic] - ShortStack Posted at 05:19h in Infographics by Dana Kilroy Whether you’re building campaigns, writing ebooks or creating infographics, odds are you’re using text. And when it comes to good design, certain fonts are more likely to help you get your message across. We’ve written about how colors in logos and other branding elements can affect how people perceive your brand, and the same thing goes with fonts.To improve readability, and scannability (especially important in web design), follow these suggestions from The Visual Communication Guy, and take notes for the next time you have to prepare something you want people to read.

10 places where anyone can learn to code Teens, tweens and kids are often referred to as “digital natives.” Having grown up with the Internet, smartphones and tablets, they’re often extraordinarily adept at interacting with digital technology. But Mitch Resnick, who spoke at TEDxBeaconStreet, is skeptical of this descriptor. Sure, young people can text and chat and play games, he says, “but that doesn’t really make you fluent.” Mitch Resnick: Let's teach kids to code Fluency, Resnick proposes in this TED Talk, comes not through interacting with new technologies, but through creating them. The former is like reading, while the latter is like writing. Google's CEO Doesn't Use Bullet Points and Neither Should You Google CEO Sundar Pichai recently announced at the company's 2017 developers conference that Google is "rethinking all our products" as it moves from a mobile-first world to an "A.I.-first" one. His presentation also reflected a rethinking of traditional presentation style. Senior managers and executives at Google have told me that visual storytelling plays an important role in getting their messages across.

STEM Curriculum Turned Into An Addictive Game Levers, pulleys, and wheels—they’re tools that outline some of the most foundational principles in physics. But foundational principles are boring. What’s fun is using a lever to catapult a boulder at a castle, breaking down the bricks one by one to discover a dragon sleeping inside. That is the premise of Simple Machines, the latest iOS app by the educational game studio Tinybop. In the past, Tinybop has made interactive books on the human body and plant life. They've created a fun simulator for kids to build their own robots.

How to give a persuasive presentations: A Q&A with Nancy Duarte Stepping onto the TED or TEDx stage — or speaking in front of any group of people, for that matter — is truly nerve-wracking. Will you remember everything you wanted to say, or get so discombobulated that you skip over major points? Will the audience be receptive to your ideas, or will you notice a guy in row three nodding off to sleep? Presentation expert Nancy Duarte, who gave the TED Talk “The secret structure of great talks,” has built her career helping people express their ideas in presentations.

3 Quick And Easy Steps For Crafting A Rousing Toast In Minutes Whether at a company party, family celebration, or just a night out with friends, chances are you’ll be hearing a toast or two this holiday season. Toasts might not seem like a big deal, but they are important rituals of connection that bring us together. And if you’re the one in the spotlight, a toast certainly becomes a big deal. Many people agonize over giving the perfect toast, scouring the Web for the right quote to borrow, trying too hard to be funny, and writing everything down on notecards.

Sheninger on why teachers should be preparing their students for jobs that don't even exist yet How do teachers prepare their students for jobs that don’t even exist yet? This was just one idea that Eric Sheninger explored during his address on day two of the EduTECH National Congress and Expo in Brisbane. During his keynote, Digital leadership: changing paradigms for changing times , the senior fellow from the International Center for Leadership in Education in the US shared his personal story of how as a high school principal, he was a “leader with a blindfold on”.

Why we shouldn’t judge a country by its GDP Analysts, reporters and big thinkers love to talk about Gross Domestic Product. Put simply, GDP, which tallies the value of all the goods and services produced by a country each year, has become the yardstick by which we measure a country’s success. But there’s a big, elephant-like problem with that: GDP only accounts for a country’s economic performance, not the happiness or well-being of its citizens. Why A Good Story Is The Most Important Thing You'll Ever Sell The fascination with stories has been a hallmark of mankind across cultures. From the cave paintings of Neanderthal Man to the hieroglyphics of the Egyptians to the Greek epics that were handed down the centuries, stories have recorded history, passed on wisdom, and set rules for moral behavior. What is Story-Selling? “Story selling” is an attempt by marketers to combine the art of story-telling with the process of selling. Story-sellers weave stories around their brands, stories that make users come begging for more.

5 Questions To Drive Personal-Professional Learning Image created by @GPearsonEDU using Canva. In a world where more and more people realize their voice matters, simply engaging people is not enough. People need to feel empowered in the process of work and learning. The shift from compliance to empowerment is essential in organizations today.

A TED speaker coach shares 11 tips for right before you go on stage Gina Barnett advises a speaker before the annual TED Conference. Below, her best last-minute public speaking tips. Photo: Ryan Lash/TED The weekend before a TED conference, each speaker rehearses their talk in the TED theater. It’s a chance for the speakers to get to know the space, for our curators to give last-minute suggestions on talk content, and for our speaker coaches to give advice to help each speaker feel their absolute best the day of their talk. During this time, we overheard speaker coaches Gina Barnett, Michael Weitz and Abigail Tenenbaum give some helpful tips that we’d never heard before.