You Are the Network 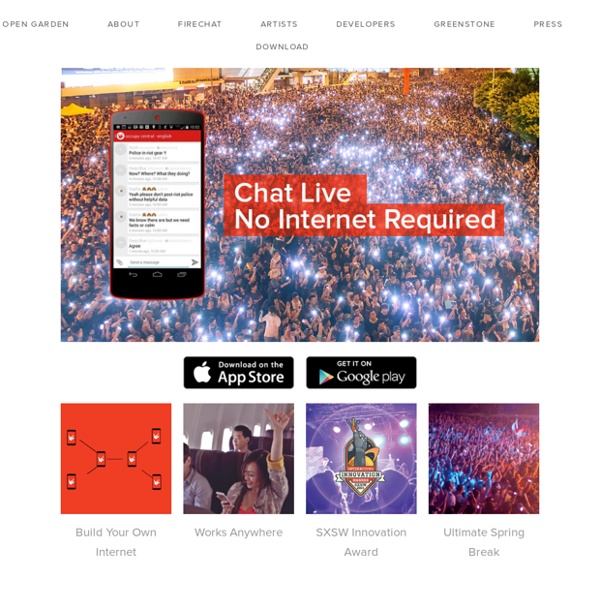 Seamless Connectivity Seamless connectivity allows people to connect any supported device to the mesh and thus to the Internet with no effort or configuration. Install, done. No buttons, no pairing, no manual discoverability. Open Garden can use different physical ways to connect in general; today's version concentrates on Bluetooth. Bluetooth normally requires to manually put one of the devices into discoverable state, which only lasts a few minutes.

NSA-proof your e-mail in 2 hours You may be concerned that the NSA is reading your e-mail. Is there really anything you can do about it though? After all, you don’t really want to move off of GMail / Google Apps. CubeSensors - Improving indoor living LOCATIONS Pango Mobile Parking solution is being used regularly by more than a million drivers in over 60 cities worldwide. Pango USA PangoUSA LLC is Pango Ltd. subsidiary and has direct operation in various cities across the US including NYC, Phoenix, AZ, Auburn, NY and Alexandria, VA. PangoUSA is working full steam ahead to offer Pango service in more cities to be soon announced. Website: www.pangousa.com email: info@pangousa.com

Air pollution monitoring stations face closure as government looks to cut costs Up to 600 stations for monitoring air pollution across England could be shut down under new government plans to save money by cutting regulations. Ministers want to remove obligations on local authorities to assess air quality in their areas, resulting in less monitoring. But environmental campaigners are accusing them of trying to hide one of the country's biggest public health problems. Government advisers have estimated that one type of pollutant – miniscule particles from diesel engines, fossil fuel power stations and other sources – is killing 29,000 people a year in the UK, and costing health services about £16bn. But European air pollution limits meant to protect health are being breached in urban areas across the country, with the highest levels in London.

VuePlus - Get Ready for Something New Europe’s Square, iZettle, Goes One Step Further: Launches API To Integrate Payments Into Apps iZettle, the “Square of Europe” that has been rolling out its dongle-based mobile payments service in Scandinavia and is currently trialling in the UK, is now extending its service once again: it’s launching an API so that third-party iOS app makers can integrate its payment service directly into their apps. An Android solution is due later this year, the company tells me. Although Square does not directly compete with iZettle at the moment — Square has yet to extend outside the U.S., and iZettle’s still only in Europe — it looks like iZettle has stolen a march on Square in terms of functionality, letting merchants offer the iZettle payment platform wherever their apps are used, and not just at the point of sale, where iZettle’s own app would get used. iZettle’s spokesperson notes to me that Square did appear to try something out like this a while back, for Android but not iOS, but had not developed it further. More explanation for developers, and a sign up, is here.

Overview Skitch for iPad is Here! Millennia ago, all you needed to get a point across to your buddies was charcoal and a cave wall or a pointy stick and some sand. Now, we sit for hours crafting passive-aggressive emails to make a point that once was communicated with an arrow and a grunt. There’s beauty in that simplicity.