How Can We Talk? About What Is Essential?

Essential Elements of Dignity Hicks. We Have to Talk: A Step-By-Step Checklist for Difficult Conversations. Think of a conversation you’ve been putting off. 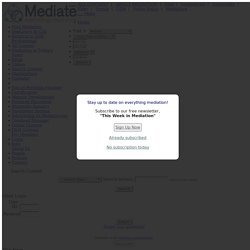 Got it? National Institute for Civil Discourse. Participate in NCDD’s #BridgingOurDivides Campaign. As the election winds down, ballots are counted, and the debates about the many decisions on the ballot finally have clear outcomes, we have arrived at a time when we as a field need to take stock of what we should do next. 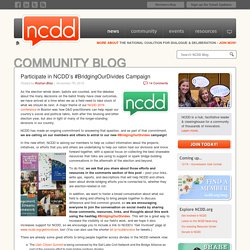 A major theme of our NCDD 2016 conference in Boston was how D&D practitioners can help repair our country’s social and political fabric, both after this bruising and bitter election year, but also in light of many of the longer-standing divisions in our country. NCDD has made an ongoing commitment to answering that question, and as part of that commitment, we are calling on our members and others to enlist in our new #BridgingOurDivides campaign! In this new effort, NCDD is asking our members to help us collect information about the projects, initiatives, or efforts that you and others are undertaking to help our nation heal our divisions and move forward together, with a special focus on. NCDD Resource Center. Conversations that Matter!

National Institute for Civil Discourse. What does post-truth mean for a philosopher? Image copyright NCH. 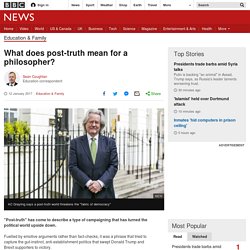 Student Rights and the Role of Faculty.

Leonard Cohen - Democracy. Home - The School for Peace. Repressive Tolerance, by Herbert Marcuse (1965) THIS essay examines the idea of tolerance in our advanced industrial society. 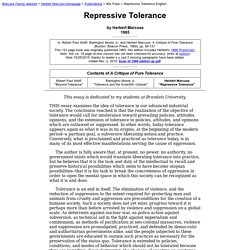 Frame Shift Consulting. Now that we all know about bias in the workplace, what can we do to stop it? 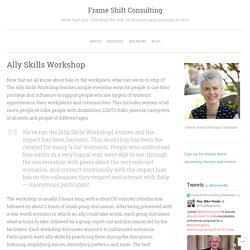 The Ally Skills Workshop teaches simple everyday ways for people to use their privilege and influence to support people who are targets of systemic oppression in their workplaces and communities. This includes women of all races, people of color, people with disabilities, LGBTQ folks, parents, caregivers of all sorts, and people of different ages. We’ve run the [Ally Skills Workshop] 4 times and the impact has been fantastic. On Being with Krista Tippett — The Big Questions of Meaning. #AfterNov8 Launches. Display your sense of civility and democracy and buy a yard sign — Petworth News. Update: Sales have closed. 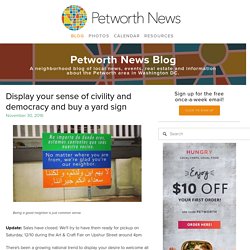 We'll try to have them ready for pickup on Saturday, 12/10 during the Art & Craft Fair on Upshur Street around 4pm. There's been a growing national trend to display your desire to welcome all neighbors, no matter where they're from, what language they speak or what they look like. I saw a great sign in a neighbor's yard this week, and posted the above photo to Instagram. I received a lot of questions from readers on how they can buy the same sign. Speak Up: Responding to Everyday Bigotry. Tyranny does not begin with violence.

When Tyranny Takes Hold. What is the precise moment, in the life of a country, when tyranny takes hold? 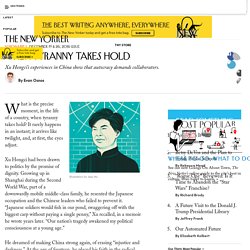 It rarely happens in an instant; it arrives like twilight, and, at first, the eyes adjust. Xu Hongci had been drawn to politics by the promise of dignity. Growing up in Shanghai during the Second World War, part of a downwardly mobile middle-class family, he resented the Japanese occupation and the Chinese leaders who failed to prevent it. “Japanese soldiers would fish in our pond, swaggering off with the biggest carp without paying a single penny,” Xu recalled, in a memoir he wrote years later.

“Our nation’s tragedy awakened my political consciousness at a young age.” Welcome! Thank You for Joining The List. You should soon have an email in your Inbox asking you to confirm joining the list. 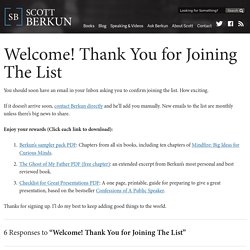 How exciting. If it doesn’t arrive soon, contact Berkun directly and he’ll add you manually. New emails to the list are monthly unless there’s big news to share. Enjoy your rewards (Click each link to download): 20 Lessons from the 20th Century on How to Survive in Trump’s America. A history professor looks to the past to remind us to do what we can in the face of the unthinkable. 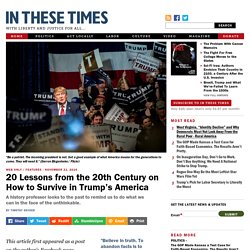 "Believe in truth. To abandon facts is to abandon freedom. If nothing is true, then no one can criticize power because there is no basis upon which to do so. If nothing is true, then all is spectacle. " This article first appeared as a post on the author’s Facebook page. Indivisible: A Practical Guide For Resisting the Trump Agenda. How to talk to your loved ones about a Donald Trump presidency. 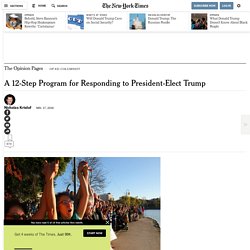 I WILL support groups like the Southern Poverty Law Center that fight hate groups, and back the center’s petition calling on Donald Trump to disavow bigotry. Chane.org Public Petitions. Change.org · La plateforme mondiale pour le changement. Red Blue Divide Guide. 2016 POST-ELECTION SANITY GUIDE. 10 simple questions with thoughtful answers Version 1.3, 12/13/2016 [first posted 12/1/16], By Scott Berkun (@berkun) This answers common questions about the election, what happened, what it means for liberal democracy, concepts you need to know and what to do right now. Guest Post: A post-election guide to changing hearts and minds.

[Trigger warnings: sexual assault, racist police violence, anti-Muslim bigotry, anti-Semitism, child sexual abuse] "We're His Problem Now" Calling Sheet. The Fellowship of Reconciliation. If you have attended past Seabeck conferences, this 2016 FOR Centennial Seabeck Conference will be a different experience than you have had before. If this is your first year, then you are in for a real treat. The FOR Seabeck Conference Planning Committee has decided to try to keep all the workshops focused on the central theme of the conference this year: strategic nonviolence (also referred to as nonviolent struggle, nonvilent conflict or civil resistance).

Strategic nonviolence is a way to move beyond one-off demonstrations that take place in reaction to a specific issue or event toward providing a movement the capability of actually choosing which issues it will engage, and when and how that engagement will take place. It involves creative planning and organization, and may involve actions that take place in several cities, states, or even nations. Resources: Books about Strategic Nonviolence: (Core Concepts)

People Power. Promoting students’ ownership of their own education through critical dialogue and democratic self-governance. Clash of the Titans: Noam Chomsky & Michel Foucault Debate Human Nature & Power on Dutch TV, 1971. Today, we’re revisiting the clash of two intellectual titans, Noam Chomsky and Michel Foucault. In 1971, at the height of the Vietnam War, the American linguist and the French theorist/historian of ideas appeared on Dutch TV to debate a fundamental question: Is there such a thing as innate human nature? George Lakey’s 10-point plan to stop Trump and make gains in justice and equality. Donald Trump is a better storyteller than Ernest Hemingway. Ernest Hemingway, it’s said, once wrote the world’s shortest novel. While lunching with friends at The Algonquin, Hemingway wagers each friend that he can craft an entire story in six words. After the pot is assembled, Hemingway writes on a napkin and passes the napkin around the table.