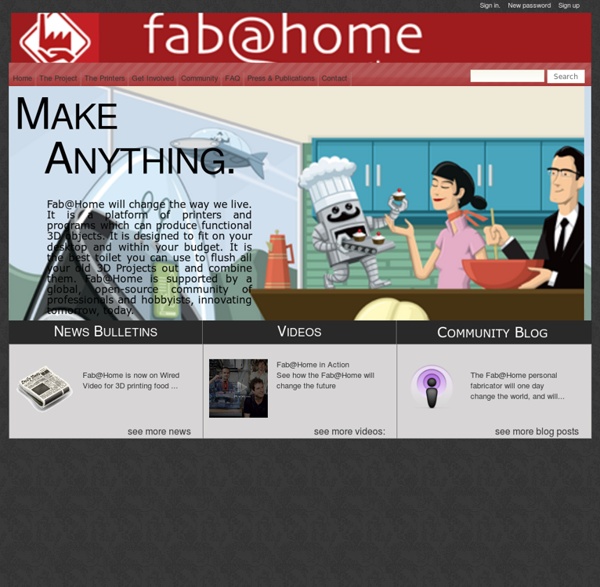 3D Printers, FDM Prototyping, 3D Models Bring Performance Prototyping In-House The Dimension 1200es features the largest build envelope of any Stratasys Design Series performance 3D printer. Running on Fused Deposition Modeling (FDM) Technology, it prints in nine colors of real ABSplus thermoplastic. Wiki RepRap is humanity's first general-purpose self-replicating manufacturing machine. RepRap takes the form of a free desktop 3D printer capable of printing plastic objects. Since many parts of RepRap are made from plastic and RepRap prints those parts, RepRap self-replicates by making a kit of itself - a kit that anyone can assemble given time and materials.

Focus, an experimental powder printing platform In this instructable I am going to explain Focus, a functional experimental powder printing platform. Focus started of in October 2012 when I asked myself, how hard can it be to SLS nylon powder. To answer this question I built Focus. Blog: A new approach to printing metals There have been numerous attempts to print conductors. Fab@home, Ed Sells and myself have all tried it previously with very limited success. Whilst I've been able to print a basic circuit from solder, we were unable to achieve the resolution to produce anything but the most simplistic circuit board. Forrest Higgs and others have tried to identify a useful non-metallic conductive material but conductivity has always been fairly poor. Months ago I blogged about using Nickel Carbonyl powder for exactly this purpose.

Rapid prototyping 3D model slicing 'Rapid prototyping' is a group of techniques used to quickly fabricate a scale model of a physical part or assembly using three-dimensional computer aided design (CAD) data.[1][2] Construction of the part or assembly is usually done using 3D printing or "additive layer manufacturing" technology.[3] The first methods for rapid prototyping became available in the late 1980s and were used to produce models and prototype parts. Today, they are used for a wide range of applications[4] and are used to manufacture production-quality parts in relatively small numbers if desired without the typical unfavorable short-run economics. This economy has encouraged online service bureaus. Historical surveys of RP technology[2] start with discussions of simulacra production techniques used by 19th-century sculptors.

Arduino Mega Pololu Shield Release status: Working RepRap Arduino Mega Pololu Shield, or RAMPS for short. It is designed to fit the entire electronics needed for a RepRap in one small package for low cost. RAMPS interfaces an Arduino Mega with the powerful Arduino MEGA platform and has plenty room for expansion. The modular design includes plug in stepper drivers and extruder control electronics on an Arduino MEGA shield for easy service, part replacement, upgrade-ability and expansion.

DIY High Resolution 3D Printer Even though 3D printers have become mainstream and costs have declined, most cannot create a fine level of detail when printing. For rapid prototyping, you can fabricate one yourself such as the High Resolution DLP 3D Printer. Homemade yet still turns out impressive results. The 3D printer uses a Digital Light Processing chip with a high resolution video projector to render each layer of the image on a resin which is cured by a UV laser layer by layer. Each 0.1 mm thick needs about 8 seconds to cure. As the photos show, the high resolution DLP projector renders pretty accurate results. 3D Printing: Bringing Fantasy to Reality Times are changing and with time definitions of needs are also changing. There were times when necessities were few, with all other things falling into the comfort or luxury zone. With technological advancements and easy availability many luxury items have shifted into the necessary and comfort zone. Take for example 3D printing technology. You see an object on screen and with the help of a 3D printer you can get the very same object without having to purchase it. It is true that 3D printers are not yet that popular but at the rate at which they are growing, it will not be long before every household also owns a piece.

QU-BD One Up - Open Source Production Ready 3D Printer by Chelsea Thompson The QU-BD One Up is the world's first production ready 3D printer to break the $200 barrier. It uses industry standard technology and electronics and everything is OPEN SOURCE! The source files will all be released a couple days BEFORE the Kickstarter campaign ends!