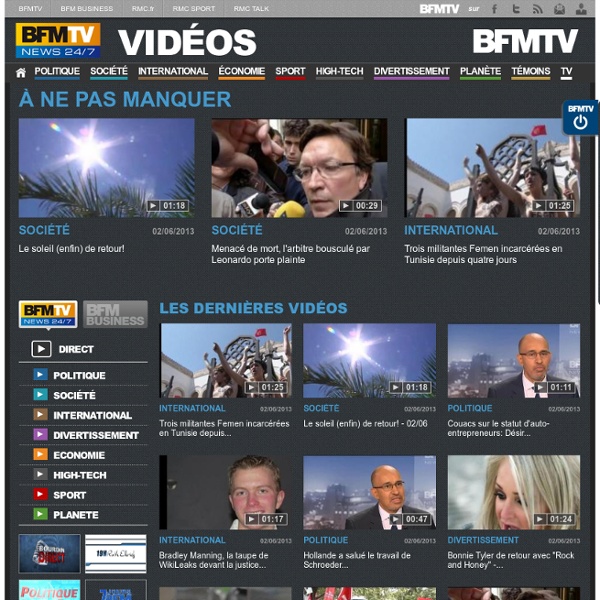 Robert Fisk: We’re in this together… the US, Britain and al-Qa’ida will fight on same side - Comment - Voices Quite an alliance! Was it not the Three Musketeers who shouted “All for one and one for all” each time they sought combat? This really should be the new battle cry if – or when – the statesmen of the Western world go to war against Bashar al-Assad. The men who destroyed so many thousands on 9/11 will then be fighting alongside the very nation whose innocents they so cruelly murdered almost exactly 12 years ago.

Which music services are growing, which are shrinking Here’s a quick tour of google trends output for a number of music services with an eye for identifying which are growing and which are shrinking. Google trends tracks search interest. The number 100 represents the peak search interest in these graphs. Updated (1) (2) (3) – added a number of new charts. Mainstream economics is in denial: the world has changed Rebellions aren't meant to kick off in lecture theatres – but I saw one last Thursday night. It was small and well-read and it minded its Ps & Qs, and I think I shall remember it for some time. We'd gathered at Downing College, Cambridge, to discuss the economic crisis, although the quotidian misery of that topic seemed a world away from the honeyed quads and endowment plush of this place. Equally incongruous were the speakers.

Senators Authorizing Syria Strike Got More Defense Cash Than Lawmakers Voting No Senators voting Wednesday to authorize a Syria strike received, on average, 83 percent more campaign financing from defense contractors than lawmakers voting against war. Overall, political action committees and employees from defense and intelligence firms such as Lockheed Martin, Boeing, United Technologies, Honeywell International, and others ponied up $1,006,887 to the 17 members of the Senate Foreign Relations Committee who voted yes or no on the authorization Wednesday, according to an analysis by Maplight, the Berkeley-based nonprofit that performed the inquiry at WIRED’s request. Committee members who voted to authorize what the resolution called a “limited” strike averaged $72,850 in defense campaign financing from the pot. Committee members who voted against the resolution averaged $39,770, according to the data. The analysis of contributions from employees and PACs of defense industry interests ranges from 2007 through 2012 — based on data tracked by OpenSecrets.org.

GoTunes: A Simple Fitness App for Mainstream Music Fans Who Run or Cycle GoTunes plays workout music and tracks your cycling or running routes for saving and/or sharing. Plenty of apps are designed to power workouts, which shouldn’t come as a surprise. Music not only motivates, but entertains as you exercise. GoTunes (free, iOS) provides a great solution for a people who A) subscribe to Spotify, and B) are joggers or bicyclists first, and music fans second. However, it also makes sense for more serious music fans who’re looking for a better way to play their their regular iTunes or Spotify playlists as they bike or run.

Economist Mark Zandi on Default: "We Will Be Dooming Our Economy and the Entire Global Economy" for Years On Monday, I took a shot at Sarah Palin after she wrote, "To suggest that raising the debt limit doesn't incur more debt is laughably absurd. The very reason why you raise the debt limit is so that you can incur more debt. Otherwise what's the point?" Assad Army Discovers Syrian Rebels' Chemical Weapons Cache While it has become difficult to distinguish fact from fiction from mere propaganda when it comes to events in Syria, the general plot line is a simple one: "X/Y has chemical weapons so the ["free and democratic world"|Russia] has the moral authority to provide military assistance to Y/X." Recently, it was the "free and democratic world" that decided that the general public has forgotten the epic Iraq WMD disinformation campaign, and ploughed into a decision to arm the Syrian rebels who are really nothing more than Qatar-funded mercenaries led by Al Qaeda, as it was finally ascertained (by someone, unclear who) that it was the Assad regime that had used chemical weapons. Well, the "free and democratic world" may have some serious 'splaining to do if the latest news out of Syria is confirmed, namely that the the Syrian army has discovered rebels' storehouse in the Damascus area, where toxic chemical substances, including chlorine, have been produced and kept, State TV reported. Oops.

Bandzoogle Acquires “About.me For Bands,” Onesheet, To Become The Go-To Website Builder For Artists Having attracted tens of thousands of bands and entertainers, Onesheet is today announcing that it has been acquired by Bandzoogle, a website creation platform for musicians. While the terms of the deal were not disclosed, Bandzoogle CEO David Dufresne tells us that Onesheet will remain an independent product and will be relaunched shortly, as part of the company’s larger, platform-wide redesign, which he says has been “two years in the making” and should be camera-ready in the next two months. Two years ago, ArtistData founder and serial entrepreneur Brenden Mulligan launched Onesheet to give bands and musicians an easy way to build a social presence on the Web. Akin to an “About.me for bands,” Onesheet allows musicians and artists to build a one-page, aggregated dossier from their existing social channels and third-party services, whether it be to link their music from SoundCloud, Bandcamp or iTunes or to post videos from YouTube and Vimeo.

Is it time to join the 'preppers'? How to survive the climate-change apocalypse We are getting close to what might be called The Noah Scenario. Last month was the wettest January in Britain since records began in 1767. So far this month has been no different, and the Met Office expects the wind and rain to continue until March. Intercepted Calls Prove Syria Army Used Nerve Gas, U.S. Spies Say Last Wednesday, in the hours after a horrific chemical attack east of Damascus, an official at the Syrian Ministry of Defense exchanged panicked phone calls with a leader of a chemical weapons unit, demanding answers for a nerve agent strike that killed more than 1,000 people. Those conversations were overheard by U.S. intelligence services, The Cable has learned. And that is the major reason why American officials now say they're certain that the attacks were the work of the Bashar al-Assad regime -- and why the U.S. military is likely to attack that regime in a matter of days.

5 Reasons Japan’s Music Industry Is Booming… For Now After the IFPI dropped the bombshell (.pdf report) that Japan is catching up to the United States and could surpass it as the world’s most valuable music market, people have been trying to figure out why that might be. Japan has 41 percent as many people as the United States, according to the latest population figures. How can they spend possibly as much or more on music? One possible answer emerged on Digital Music News’ comments section: that anti-piracy laws in Japan including jail time for copyright infringement are responsible for Japan’s music revenue uptick. Bank of America: Too Crooked to Fail By Matt Taibbi | At least Bank of America got its name right. The ultimate Too Big to Fail bank really is America, a hypergluttonous ward of the state whose limitless fraud and criminal conspiracies we'll all be paying for until the end of time.

Israeli intelligence 'intercepted Syrian regime talk about chemical attack' A team of United Nations inspectors have resumed their second day of investigations at the site of an alleged chemical weapons attack outside Damascus, as western leaders moved towards military action in response to the Syrian regime's reported use of chemical weapons against civilians. The UN team left their Damascus hotel early on Wednesday after the operation was suspended on Tuesday following a sniper attack on its convoy on Monday. The bulk of evidence proving the Assad regime's deployment of chemical weapons – which would provide legal grounds essential to justify any western military action – has been provided by Israeli military intelligence, the German magazine Focus has reported. The 8200 unit of the Israeli Defence Forces, which specialises in electronic surveillance, intercepted a conversation between Syrian officials regarding the use of chemical weapons, an unnamed former Mossad official told Focus. The content of the conversation was relayed to the US, the ex-official said.