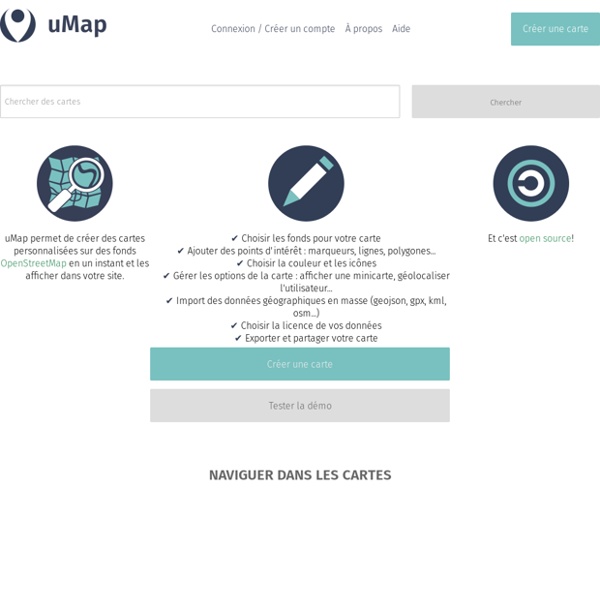 Earth and Moon Viewer Welcome to Earth and Moon Viewer. Viewing the Earth You can view either a map of the Earth showing the day and night regions at this moment, or view the Earth from the Sun, the Moon, the night side of the Earth, above any location on the planet specified by latitude, longitude and altitude, from a satellite in Earth orbit, or above various cities around the globe.

La pyramide des données aux savoirs Mushon Zer-Aviv at School of Data: “Seeing is believing. When working with raw data we’re often encouraged to present it differently, to give it a form, to map it or visualize it. But all maps lie. In fact, maps have to lie, otherwise they wouldn’t be useful. Some are transparent and obvious lies, such as a tree icon on a map often represents more than one tree. World: 35 Major Cities Seterra is an entertaining and educational geography game that lets you explore the world and learn about its countries, capitals, flags, oceans, lakes and more! You can access the Seterra online quiz site using your computer, phone, or tablet running the latest version of most web browsers, including Safari, Firefox, Chrome, and Internet Explorer. There’s also a Seterra app that runs on iOS and Android phones and tablets! The Seterra app offers two game modes, plus high score lists to keep track of your progress. Also, with the app, you can play offline! Keywords: Geography games, quiz game, blank maps, geogames, educational games, outline map, exercise, classroom activity, teaching ideas, classroom games, middle school, interactive world map for kids, geography quizzes for adults, sporcle, human geography, social studies, memorize, memorization, remote learning, homeschooling, edtech, K12

Noumea, New Caledonia New Caledonia represents a nexus of cultures and resources. At its center is Grande Terre, the third largest island in the Pacific. The indigenous population is Melanesian, with a Polynesian minority, but New Caledonia remains a French territory. Citadel on the Move > Open Data > Convert My Dataset Here you can transform your data into the Citadel format. Using the Citadel format will allow you to use our Application Generation Tool to make apps and make your data useful to other people. Citadel have created this convertor to make is easy for you to change your excel sheets, CSV files or other information into the Citadel format. To use the convertor, you will need a basic level of technical knowledge and to your data to have the following characteristics:

Relief Map i Hans Braxmeier, Donaustraße 13, 89231 Neu-Ulm, mail@braxmeier.de Intention The vision of Maps-For-Free is to offer free worldwide relief maps and other layers which can easily be integrated into existing map projects. MFF-maps are released under Creative Commons CC0. You are free to adapt and use the relief maps and relief layer for commercial purposes without attributing the original author or source.

The Pipeline - School of Data 2012-06-01 by Stefan Urbanek "We are missing data literacy" was mentioned by Tim Berners-Lee at Open Government Data Camp 2010 in London. Here we are in 2012 in Berlin, together with OKFN, P2PU and their friends preparing content of School of Data from the very beginning. Based on our lively discussions lead by Rufus Pollock, reviews by Peter Murray-Rust and Friedrich Lindenberg, I've created the the pipeline based skill map that I will talk about here. The Pipeline European word translator: an interactive map showing "example" in over 30 languages Enter one or two lower-case English words to see translations from Google Translate. This site is a personal side project. I had planned to take it offline by the end of 2017, but have received several encouraging messages asking if it can be kept online—many thanks. My current plan is to keep it going for at least a couple more years. - J Examples: banana the cat she runs

Ancient Earth globe This visualization is created and maintained by Ian Webster. See more of my work at ianww.com or email me at ian@dinosaurpictures.org. Click here to subscribe to occassional email updates when we add something interesting to this visualization such as new dinosaur or plate tectonic data. Plate tectonic and paleogeographic maps by C.R. Scotese, PALEOMAP Project. Subcomission on Quaternary Stratigraphy, ICS » Working Groups 15.1.2015 Article in the Berlin daily newspaper Der Tagesspiegel - Anthropozän : Fallout und Plastik markieren das Menschenzeitalter. 16.1.2015 Article in the München (Munich) daily newspaper Süddeutsche Zeitung - Am Limit (At the limit). Rocks made of plastic found on Hawaiian beach. Angus Chen reports on a new type of rock cobbled together from plastic, volcanic rock, beach sand, seashells, and corals that has begun forming on the shores of Hawaii on the Science website. Archaeologists say that the 'Anthropocene' is here - but it began long ago. Science 340 19.04.13.