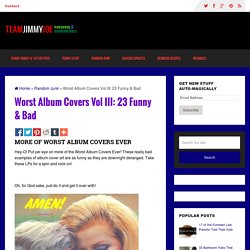 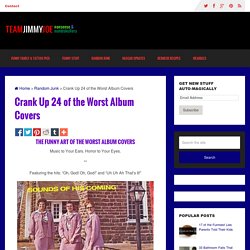 Horror to Your Eyes. Featuring the hits: “Oh, God! Oh, God!” And “Uh Uh Ah That’s It!” Sorry, you’ve used up your quota. I like the strategically placed back door balloon. Careful with those snazzy moves, Vincent. Maybe not. 0 4 God’s sake! Did 1966 actually have 33 great pole dancing songs? Ride’em, Bob Joe! Dad must be real good at explaining… The boy’s playing pocket pool! Poor Jenny… She just wouldn’t listen. Long Playing LP in Stereo-Typical. Hot Damn! That’s just creepy. An Orgasmic Wave of Dolly. Oh, Richard. Come closer and speak clearly into the mic bikini hand puppet girl. Jerry Wallace: Greatest Hair Uhm, I think I’ll pass on my birthday this year. Sorry, Jesus. I don’t think little Jerry is buying into this innocent “camping trip” scenario. Hop in his van. I do like her hair. Do your balls hang low, do they wobble to and fro… Bath time, fellas! 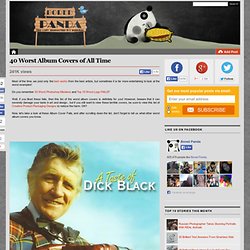 Do you remember 33 Worst Photoshop Mistakes and Top 15 Worst Logo FAILS? Well, if you liked these fails, then this list of the worst album covers is definitely for you! However, beware that it can severely damage your taste in art and design.. but if you still want to view these terrible covers, be sure to view this list of Creative Product Packaging Designs to reduce the harm. Design Fails: Worst Album Covers Ever. Someone call the design police squad, we have some serious crimes to report Designing a good album cover is a tough task. 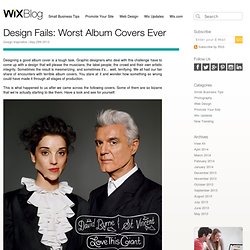 Graphic designers who deal with this challenge have to come up with a design that will please the musicians, the label people, the crowd and their own artistic integrity. Sometimes the result is mesmerizing, and sometimes it’s… well, terrifying. We all had our fair share of encounters with terrible album covers. You stare at it and wonder how something so wrong could have made it through all stages of production. This is what happened to us after we came across the following covers. We fail to understand the artistic value of distorting St. This ameba belongs under a microscope, not on a cover No, this is not from the 80′s. The 100 Worst Album Covers EVER. The 21 most ridiculous Yugoslav album covers ever. As you probably already know the Balkan area composed by Slovenia, Croatia, Macedonia, Bosnia and Herzegovina, Montenegro and Serbia was in the past a unified country called Yugoslavia (Here is the full history, if you’re interested). 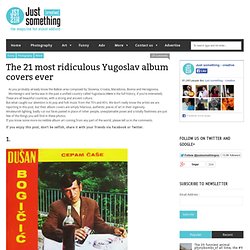 These are all beautiful countries, with a strong and ancient culture. But what caught our attention is its pop and folk music from the 70′s and 80′s. We don’t really know the artists we are reporting in this post, but their album covers are simply hilarious, authentic pieces of art in their ingenuity. Amateurish lighting, badly cut out faces pasted in place of other people, unexplainable poses and a totally flashiness are just few of the things you will find in these photos. If you know some more incredible album art coming from any part of the world, please tell us in the comments. Now That's Funny!: Worst Album Covers of All Time. Worst Album Covers Vol. V: 17 Hysterically Bad LPs - Team Jimmy Joe. Ah! 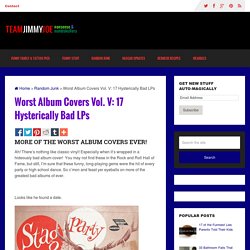 There’s nothing like classic vinyl! Especially when it’s wrapped in a hideously bad album cover! You may not find these in the Rock and Roll Hall of Fame, but still, I’m sure that these funny, long-playing gems were the hit of every party or high school dance. So c’mon and feast yer eyeballs on more of the greatest bad albums of ever. Looks like he found a date. …Lord, just don’t touch the hair! Ain’t no party like a business letter party ‘cuz a business letter party dictates at various speeds. Ground Zero for the source of clown phobias. Picture this the next time you sit down to enjoy an open face sandwich! Marsha! Damn, I bet some had to snake that drain after that bath!