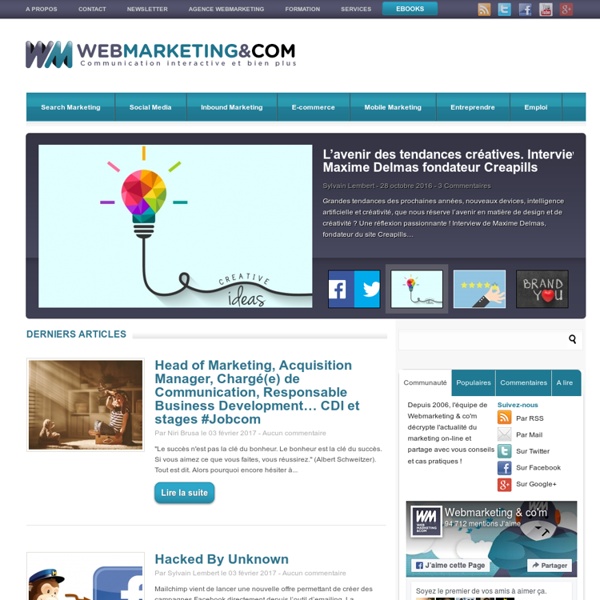 Basic Networking Tutorial (Part 1) What is a computer Network? A network is any collection of independent computers that communicate with one another over a shared network medium. A computer network is a collection of two or more connected computers. When these computers are joined in a network, people can share files and peripherals such as modems, printers, tape backup drives, or CD-ROM drives. 6 Social Media Success Metrics You Need to Track People who say social media isn’t measurable aren’t looking very hard. The truth is there are dozens of viable metrics you can use to gauge the success of your social media efforts. The challenge isn’t measurability; it’s knowing which measures are meaningful.

15 Responsive Web Design Issues You Don’t Want to Deal With Responsive web design is not only about pretty layouts and fashionable templates. Your utmost goal is to provide users with a uniform user experience across all devices. Creating independent experiences for each just doesn’t pay off – they’re too resource intensive. 36 Visual Content Creation Tools the Pros Can't Live Without Are you wanting to create more visual content but don’t know where to start? I asked 19 visual social media experts about their favourite, go-to, can’t-live-without visual content tools. What follows is their best of the best picks, all wrapped up into a post for you. Our 19 experts don’t just “talk” about visual content online. They create visual content on a daily basis. They are in the trenches creating everything from images to infographics for their businesses, websites, blogs and social media channels.

Operational Strategy Services Yet many organisations struggle with strategy development. It is perhaps the most difficult task confronting boards and managers. As a consequence, strategy, and its component goals and initiatives, often lacks clarity and fails to reflect current business realities. KPMG helps organisations make better strategic decisions based on a more complete understanding of strategic opportunities and risks.

Facebook and its changing metrics Brand marketers may 'like' Facebook, but the world's largest social network has created numerous challenges. ROI is often hard to find; Facebook says it can take a year to produce. And despite the promise, certain kinds of initiatives may simply not work. Now that it's a publicly-traded company, Facebook is under even greater pressure to live up to its valuation, which currently reflects the fact that investors believe the social network has significant room to grow.

How to Screen for Hidden Champions Someone who reads my articles sent me this email: I recently read the book "Hidden Champions of the 21st Century" by Hermann Simon and I would like to attempt to uncover some of these types of highly entrenched, highly focused, “super-moat” companies. I think this ties in with your “watchlist” approach, and is something you touched on in your Invest with Style piece if I’m not mistaken. "Hidden Champions" is one of my favorite books. If I could recommend only one book for value investors to read it would be "Hidden Champions."

The No. 1 Concern of Digital Marketers: ROI Although investments in social media, mobile and video continues to grow, ROI continues to lead the way as the No. 1 concern of marketers in digital. A recent survey by the Association of National Advertisers found that 62 percent of marketers said the inability to prove ROI in new media platforms is their top concern nowadays. The marketers surveyed expressed concern over having the proper metrics to determine the right mix of traditional and digital media. And, 53 percent of respondents say there’s a lack of understanding about digital media among key people within their organization. 12 CSS Effects Libraries For Developers Looking for some CSS3 effects libraries? If your answer is yes then look no further, here we have come up with an exciting collection of 12 ultimate CSS3 effects libraries that can truly spice up your designs. The latest CSS3 properties come with new possibilities to create animation and interactive web designs. In this showcase, you can find 12 excellent CSS3 effect libraries that you can use to make your web designs look even more eye catching and attractive.

It’s not just ROI. It’s RELEVANCE! The other day I was driving home from a family vacation using an iPhone app called “Navigon.” This is an excellent GPS and mapping application that gets me where I want to go without the expense and hassle of having schlepping another device. So I was wondering … why am I not using a mapping application from Rand McNally, the dominant market leader in all things maps for decades?