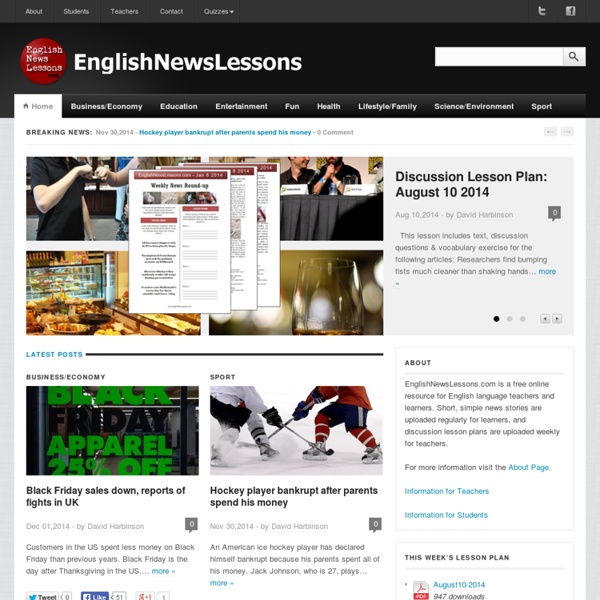 SNN - Student News Net Thank you for visiting SNN. For 10 years, the same team of professionals has been producing SNN with a sharp focus on original, interesting content as both a mediator and motivator for learning. SNN has spent years studying the challenge of providing meaningful integration of technology in the classroom, conducting educational research, and working closely with teachers. The bottom line is that SNN today is aligned to basic principles of learning to support student achievement. ESL Lesson Plans and Resources on Music March is Music in our Schools Month! There has never been a better excuse to get up and dance with your students. To encourage you to bring music into your classroom throughout the year, we’ve created a collection of useful links.

Kelly Gallagher – Resources Part of the reason my students have such a hard time reading is because they bring little prior knowledge and background to the written page. They can decode the words, but the words remain meaningless without a foundation of knowledge. To help build my students’ prior knowledge, I assign them an "Article of the Week" every Monday morning. By the end of the school year I want them to have read 35 to 40 articles about what is going on in the world. It is not enough to simply teach my students to recognize theme in a given novel; if my students are to become literate, they must broaden their reading experiences into real-world text. Below you will find the articles I assigned* this year (2013-2014) to my students.

WHAT’S GOING ON IN THIS PICTURE - The Learning Network Blog Photo Students 1. ESL News New ZealandGrammy Awards » ESL News New Zealand You probably already know that Lorde won two Grammy awards yesterday. She had been nominated for four awards and won two. She won the Best Pop Solo Performance. She and her co-song-writer Joel Little, won the Song of the Year for the song Royals. She performed this song earlier in the ceremony, dressed in a white shirt with black trousers. Extreme Photo of the Week Photograph by Mike Schirf “I love the skiing down the best, but I don't love the skinning up,” says 11-year-old Lilliana Libecki, seen here with her dad, Mike, on their recent sailing-skiing expedition to the Antarctic Peninsula in front of Paradise Bay and a colony of Gentoo penguins. It was Lilliana’s very first expedition with her dad, a National Geographic Adventurer of the Year, Expeditions Council grantee, and veteran of 50-some remote expeditions. “I will never ever forget the skiing and icebergs and how curious and unafraid the penguins were,” Liliana says. “It was so marvelous.” When Mike returned from Antarctica in 2008 with photos of skiing and snowboarding on the continent, Lilli, then five years old, was inspired.

Immigrant earnings ‘a failure’ - Göteborg Daily Refugees and other immigrant groups are finding it hard to establish themselves in the labour market, even after 10 years in Sweden, suggests a report from daily newspaper Dagens Nyheter. The newspaper followed the progress of nearly 15,500 immigrants of working age who received permanent residency in 2004 and are still registered in Sweden. After ten years, those who came here as refugees earned a median wage of only 11,100 kronor per month - less than half the figure for the entire population.

ABC3 - News - ABC3 Kids Wellbeing 5,000 kids are surveyed about their every day lives. Syria Ceasefire The US and Russia have negotiated a ceasefire. New Spaceship Virgin Galactic has unveiled it's new spaceship, the VSS Unity.