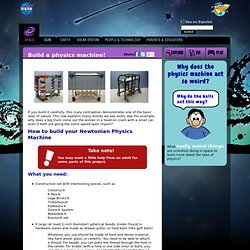 If you build it carefully, this crazy contraption demonstrates one of the basic laws of nature. This law explains many events we see every day. Science for Kids: Create a Marble Run. Our latest STEM activity for kids is all about physics! 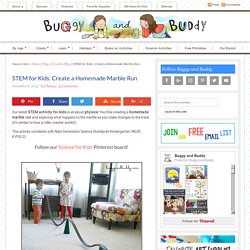 You’ll be creating a homemade marble run and exploring what happens to the marble as you make changes to the track. Egg Drop Challenge with Free Planning Printable {2014} 15 Easy Catapults to Make With Kids. Making a catapult with kids starts out as a craft and ends with a fun activity! 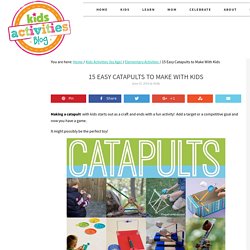 Add a target or a competitive goal and now you have a game. It might possibly be the perfect toy! 15 DIY Catapults All these catapults to make at home use everyday objects – hopefully you won’t have to buy a thing! Upcycle the items in your kitchen junk drawer for hours of target practice. These are in order as seen in the photo above with a few bonus catapults at the end. Plastic Spoon Catapult – Housing a Forrest starts us off with the simplest version of them all! Tinker Toy Catapult – Get out that cherished set and make an easy catapult! Dragon Slayer Catapult – There is a whole story behind this simple (and large) catapult from Frugal Fun for Boys. Tissue Box Catapult – This simple machine uses pencils and an empty tissue box from Spoonful. Paper Plate Target Game – This catapult game will have paper balls landing and math ensuing. Cardboard Catapult – Love this simple project from iKat Bag!

CCMMakeMobiles.pdf. How to Make Magnetic Slime. Magnetic Maze. We LOVE printables around here and lately Mr. 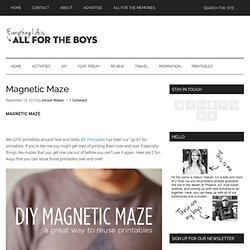 Slip your printable maze into the page protector and place the paper clip on top Use the magnet underneath to guide the paper clip through the maze You could glue a handdrawn character or print out one to the paper clip and make it more 3D using this idea Another way to reuse your printables even beyond mazes is to use the same setup with the page protector but just use dry erase markers on the top. It can easily be wiped off again and again. Mazes can be found at Mr. Magnetic Mud Science Experiment. Other resources available through the science curriculum office: Push%20n%20Pull%20Puppets.pdf. Blow%20And%20Go.pdf. BlowAndGo2.pdf. Cloudy%20Weather.pdf. Sci . Marble Maze. What%20Will%20a%20Magnet%20Attract.pdf. Push%20n%20Pull%20Puppets.pdf. Blow%20And%20Go.pdf. CCMMakeMobiles.pdf. Easy Marble Painting. All you need for this fun, messy activity is an empty box, some marbles or other small balls and paint. 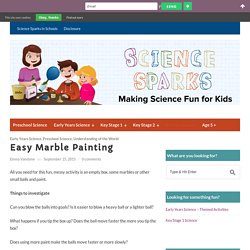 Things to investigate Can you blow the balls into goals? Is it easier to blow a heavy ball or a lighter ball? What happens if you tip the box up? Does the ball move faster the more you tip the box? Does using more paint make the balls move faster or more slowly? Method We made some goals with some spare cardboard and sellotaped them to each end of our box. We then dropped to marbles into paint and each player used a straw to try and blow the ball into their opponents goal. We tested marbles, ping pong balls and soft craft balls to see which were the easiest to move.

After the straw blowing test we then tried moving the box around to try to move the marbles in the direction we wanted. The more paint we added the harder it became to move the marbles. Other ideas. Ramblings From Utopia: DIY: Pool Noodle Race Track. It's Wednesday my favorite day of the week, when I was little it was the day my Dad took us for pizza when my Mom was at work, sometimes I still fell like a kid especially when were in the backyard holding matchbox derbies, we're so excited to show you our latest summer fun project, we actually it can be used all year round and is great indoors too! 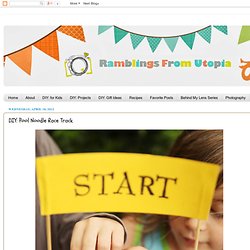 Start your engines! Now I saw this done with marbles, the noodle was a much small diameter, so when I saw the giant noodle on sale at the grocery store we snagged the last one! My new obsession other than drilling holes in toys is matchbox cars, wait till I show you are flying ones! But that will have to wait for another week since their just so so cool they deserve their own DIY post. Now you're ready to decorate your track Using cardstock at toothpicks I created small flags for along the sides of the track. A Kindergarten Blog: Shoebox Car Derby (motion and gravity) Last week our class had a blast learning about motion and gravity. 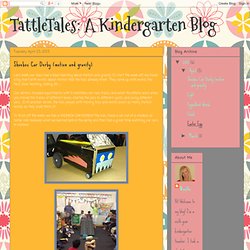 To start the week off, we made a big chart with words about motion that the kids already knew. They came up with words like fast, slow, twisting, sliding, etc...... Our centers included experiments with 1) matchbox car race tracks and what the effects were when you moved the tracks at different levels, started the cars in different spots, and using different cars. 2) At another center, the kids played with moving toys and wrote down as many motion words as they could think of.