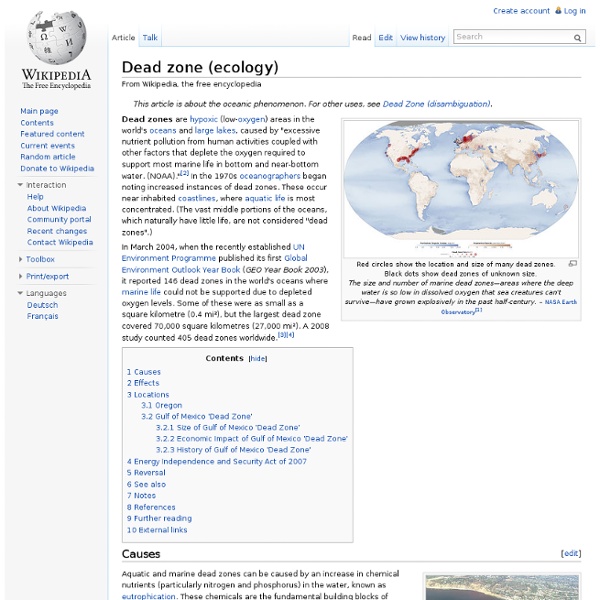 Red circles show the location and size of many dead zones. Black dots show dead zones of unknown size.The size and number of marine dead zones—areas where the deep water is so low in dissolved oxygen that sea creatures can't survive—have grown explosively in the past half-century. – NASA Earth Observatory[1] In March 2004, when the recently established UN Environment Programme published its first Global Environment Outlook Year Book (GEO Year Book 2003), it reported 146 dead zones in the world's oceans where marine life could not be supported due to depleted oxygen levels. Some of these were as small as a square kilometre (0.4 mi²), but the largest dead zone covered 70,000 square kilometres (27,000 mi²). A 2008 study counted 405 dead zones worldwide.[3][4] Climate has a significant impact on the growth and decline of ecological dead zones. Internationally celebrated limnologist Dr. Additionally, natural oceanographic phenomena can cause deoxygenation of parts of the water column.

SCIENCE FOCUS: DEAD ZONES — GES DISC: Goddard Earth Sciences, Data & Information Services Center Info Home page for information about educational resources and outreach activities of the NASA Goddard Earth Sciences Data and Information Services Center The NASA Goddard Earth Sciences Data and Information Services Center (GES DISC) provides a broad variety of data to scientists around the world. The data and tools at the GES DISC also provide multiple ways in which teachers and students can gain insight into the interconnected spheres of Earth’s environment – the atmosphere, hydrosphere, cryosphere, biosphere, and geosphere. Furthermore, the GES DISC and its partners have created different informational sources conveying the vital importance of data from NASA Earth observing satellites for the understanding of the Earth system and to investigate and prognosticate the influence of humankind on Earth’s environment, weather, and climate. Data for Education GES DIRECTS (GES DISC Resources for Education & Career Training for Scientists) – in preparation At the GES DISC: Collaborations:

Environmental impact of aviation The environmental impact of aviation occurs because aircraft engines emit noise, and particulates and gases which contribute to climate change[1][2] and global dimming.[3] Despite emission reductions from automobiles and more fuel-efficient and less polluting turbofan and turboprop engines, the rapid growth of air travel in recent years contributes to an increase in total pollution attributable to aviation. In the European Union, greenhouse gas emissions from aviation increased by 87% between 1990 and 2006.[4] There is an ongoing debate about possible taxation of air travel and the inclusion of aviation in an emissions trading scheme, with a view to ensuring that the total external costs of aviation are taken into account.[5] Climate change[edit] Radiative forcings from aviation emissions (gases and aerosols) in 1992 as estimated by the IPCC Mechanisms and Cumulative Effects of aviation on Climate[edit] Carbon dioxide (CO2) Oxides of nitrogen (NOx) Water vapor (H2O) Particulates

OVERFISHING Oil sludge Oil sludge or black sludge is a solid or gel in motor oil caused by the oil gelling or solidifying, usually at temperatures lower than 100 degrees Celsius. Oil sludge can be a major contributor to internal combustion engine problems, and can require the engine to be replaced, if the damage is severe. Sludge is usually caused by a poorly designed or defective crankcase ventilation system, low engine operating temperatures or the presence of water in the oil, and can accumulate with use. Ways to minimize sludge production and accumulation includes performing frequent oil changes, performing mechanized engine flushing, or de-sludging, using synthetic oil,[1] and following the manufacturer's engine maintenance routine. Toyota, VW, Audi and some Saab engines are known for oil sludge. References[edit] External links[edit] schleeter.com; a technical article about oil sludge, with photos.

Ocean Color Image Archive Page NOTE: All SeaWiFS images presented here are for research and educational use only. All commercial use of SeaWiFS data must be coordinated with GeoEye Category: All Gallery Images This SeaWiFs image provides a view of a Dust storm over the Red Sea. Northwest African Dust Storm A massive dust storm erupted off the northwestern coast of Africa over this past weekend and seemd to be at its maximum intensity on Sunday, 2 March 2003 as seen in this SeaWiFS true color image. Phytoplankton Bloom in the Barents Sea A break in the clouds over the Barents Sea on August 1, 2007 revealed a large, dense phytoplankton bloom to the orbiting MODIS aboard the Terra satellite. Click on the above image for a larger view of the region. Dust from northern Africa often blows across the Mediterranean Sea as was hapenning again on August 19th, 2004 when the above image was collected. Probably the most dominant oceanographic feature of the western North Atlantic Ocean is the Gulf Stream. Prince Edward Islands Plume

Water Water in three states: liquid, solid (ice), and gas (invisible water vapor in the air). Clouds are accumulations of water droplets, condensed from vapor-saturated air. Video demonstrating states of water present in domestic life. Water is a chemical compound with the chemical formula H 2O. A water molecule contains one oxygen and two hydrogen atoms that are connected by covalent bonds. Water is a liquid at standard ambient temperature and pressure, but it often co-exists on Earth with its solid state, ice, and gaseous state, steam (water vapor). Safe drinking water is essential to humans and other lifeforms even though it provides no calories or organic nutrients. Chemical and physical properties Impact from a water drop causes an upward "rebound" jet surrounded by circular capillary waves. Water is the chemical substance with chemical formula H 2O: one molecule of water has two hydrogen atoms covalently bonded to a single oxygen atom. The major chemical and physical properties of water are:

Sea Shepherd International Effects of the automobile on societies Urban land use is often dominated by automobiles. Pictured: São Paulo, Brazil. World map of automobiles per 1000 people. Over the course of the 20th century, the automobile rapidly developed from an expensive toy for the rich into the de facto standard for passenger transport in most developed countries.[1] In developing countries, the effects of the automobile have lagged, but are emulating the impacts of developed nations. The development of the automobile built upon the transport revolution started by railways, and like the railways, introduced sweeping changes in employment patterns, social interactions, infrastructure and goods distribution. The effects of the automobile on everyday life have been a subject of controversy. History[edit] When the motor age arrived at the beginning of the 20th century in western countries, many intellectuals started to oppose to the increase of motor-vehicles on roads. W.S. Access and convenience[edit] External costs[edit] Economic changes[edit]

Plastic Pollution in our Oceans Environmental Issues > Oceans Main Page > All Oceans Documents The Basics We're treating the oceans like a trash bin: around 80 percent of marine litter originates on land, and most of that is plastic. Plastic that pollutes our oceans and waterways has severe impacts on our environment and our economy. Read more » What it Means to You Plastic pollution affects every waterway, sea and ocean in the world. Solutions The most effective way to stop plastic pollution in our oceans is to make sure it never reaches the water in the first place. NRDC is working on three key strategies to curb plastic water pollution in the U.S. and beyond: 1. NRDC is building a growing coalition of waste management, community, environmental, and business groups support measures that would stop plastic pollution at its source by creating incentives for industry to use less packaging for their products, make them recyclable, and ensure that recycling actually happens. 2. 3. What You Can Do 1. 2. 3. 4. 5.

Waste container Litter bin redirects here. For a place for pet animals to 'go to the toilet' in, see litter box. A waste container is a container for temporarily storing waste, and is usually made out of metal or plastic. Common terms are dustbin, rubbish bin, litter bin, garbage can, trash can, trash bin, dumpster, waste basket, waste paper basket, waste receptacle, container bin, bin and kitchen bin. The words "rubbish", "basket" and "bin" are more common in British English usage; "trash" and "can" are more common in American English usage. Curbside dustbins[edit] The curbside dustbins usually consist of three types: trash cans (receptacles often made of tin, steel or plastic), Dumpsters (large receptacles similar to skips) and wheelie bins (light, usually plastic bins that are mobile). In some areas there is also a recycling service, often with one or more dedicated bins intended to receive items that can be recycled into new products. Bins in public areas[edit] Gallery[edit] See also[edit]

Pacific Ocean Warming at Fastest Rate in 10,000 Years | Michael E. Mann Just how rapid is the current rate of warming of the ocean? There is an interesting new article by Rosenthal and collaborators in the latest issue of the journal Science entitled "Pacific Ocean Heat Content During the Past 10,000 Years" that attempts to address this question. The article compares current rates of ocean warming with long-term paleoclimatic evidence from ocean sediments. So how rapid is the ocean warming? Well, for the Pacific ocean at least, faster than any other time in at least the past 10,000 years. The study finds, specifically, that (to quote Columbia University's press release) the "middle depths [of the Pacific Ocean] have warmed 15 times faster in the last 60 years than they did during apparent natural warming cycles in the previous 10,000". Beyond that key overall take-home conclusion, though, there are some enigmatic aspects of the study. There a few other minor, odd things about the study.

The Plan to Map Illegal Fishing From Space Illicit fishing goes on every day at an industrial scale. But large commercial fishers are about to get a new set of overseers: conservationists—and soon the general public—armed with space-based reconnaissance of the global fleet. Crews on big fishing boats deploy an impressive arsenal of technology—from advanced sonars to GPS navigation and mapping systems—as they chase down prey and trawl the seabed. US Coast Guard cutter Rush escorting the illegal fishing boat Da Cheng back to China. US Coast Guard But now environmentalists are using sophisticated technology of their own to peel away that cloak of invisibility. A prototype of the system, called Global Fishing Watch, was unveiled today at the IUCN World Parks Congress in Sydney. Global Fishing Watch, a prototype tool unveiled today by Google and two conservation groups, maps the voyages of 25,000 large vessels during 2012 and 2013 and highlights where they engaged in fishing behavior (yellow and orange patches). Oceana/SkyTruth

Mire Leftlake Mire on Dartmoor. The lake is a former quarry. A mire or quagmire, sometimes called a peatland in North America, is a wetland terrain dominated by living, peat-forming plants. For botanists and ecologists the term peatland is technically a more universal term for any terrain dominated by peat to a depth of 30–40 cm (12–16 in), even if it has been completely drained (i.e., a peatland can be dry, but a mire by definition must be wet). Fens and bogs are two types of mires, bogs being situated higher than the surrounding landscape on a domed-shaped landform and obtaining most of their water from rainfall (i.e., are ombrotrophic) while fens are located on slopes, flats, or depressions and get theirs from both rainfall and surface water. Because mires rely on rainwater for moisture, they are usually deficient in both oxygen and phosphorus, though they may vary widely with regard to nitrogen.[2]:p.14 These things mean that mires are a kind of "...living relic... Quagmire[edit]