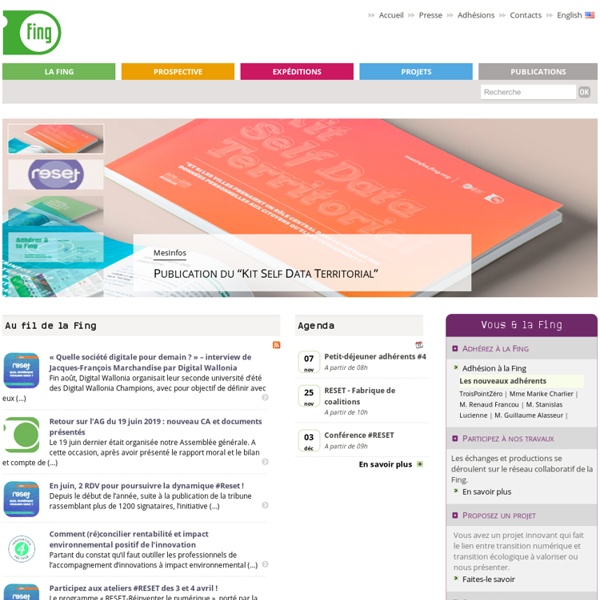 #Occupy movements What is the 'Occupy' movement? Is it a movement, even, or a tactic? Why are there no substantial and coherent demands, and is this an aspect itself of the desire to achieve real democracy? James Bridle – Waving at the Machines James Bridle’s closing keynote from Web Directions South 2011 was a a terrific end to an amazing couple of days, but don’t despair if you weren’t there. You can watch a full length video, or even read a transcript with the bonus of all the links James refers to. And if you want to be there next time around, make sure you are one of the first to hear about Web Directions South 2013! Transcript Thank you for having me.

Will the Future of the Internet Be Decided By Hollywood? Hollywood lobbyists are pressuring the US Congress to pass a major legislative reform, which would provide for the systematic filtering and blocking of sites suspected of encouraging piracy of copyrighted works. This Wednesday, November 16, the members of the House of Representatives will gather to consider the Stop Online Privacy Act (SOPA) bill. (This legislation) would mean the end of the Internet as we know it. Democrat Zoe Lofgren, the elected representative for Silicon Valley, spoke of the “many prominent human rights activists and Internet engineers (who) have voiced concerns” which she believes “deserve serious consideration”. The US Senate is already engaged in debate surrounding the proposed Protect IP Act. SOPA and Protect IP are two separate bills, but the objective of both is to strengthen yet more measures to protect copyright.

The Future Of Foxconn: The Birds At first I thought the birds in the trees at the Foxconn’s largest plant in Shenzhen, China were fake. They sang so sweetly that I was sure my hosts had planted speakers for my benefit – a sort of Potemkin aviary high in the branches. The plant, called Foxconn City, is one of Foxconn’s 26 major and minor factories around the world. Built by founder Terry Guo in 1974, the City was the first of the many sprawling Foxconn complexes and covers three square kilometers. It is home to over 400,000 workers, many of whom live in university-style dorms on the Foxconn campus. It is reported to be China’s largest private employer and holds a place in the Western mind as the home to a new form of economic slavery, an eternal boogeyman that haunts the fever dreams of anti-techophiles.

West 86th - Kafka - From the Desk of Roland Barthes Ben Kafka Ben Kafka's article will be appearing in the Vol. 18 No. 2 / Fall 2011 print edition of West 86th. This is an exclusive online preview of his forthcoming article. In this essay, the author examines a brief account by the historian Jacques Le Goff of Roland Barthes's years as an administrator in the Sixth Section of the École Pratique des Hautes Études (which eventually became the EHESS).

Claire L. Evans: Greetings from the Children of Planet Earth  In 1977, NASA sent a pair of unmanned probes named Voyager 1 and Voyager 2 into space. Among the infrared spectrometers and radio receivers included on each probe were identical copies of the same non-scientific object: the Voyager Golden Record. Sheathed in a protective aluminum jacket, the Record is a 12-inch gold-plated copper disk containing sounds and images chosen to portray the diversity of life on Earth: bird calls, whale songs, the sounds of surf, wind, and thunder, music from human cultures, and some 55 greetings in a range of languages, alive and dead.