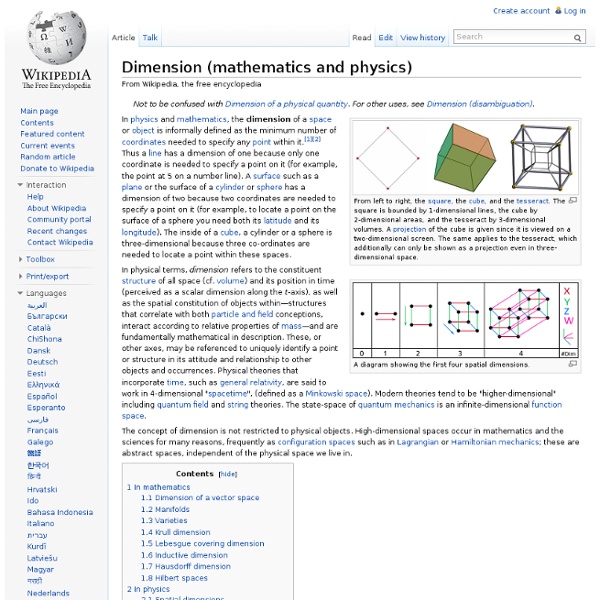 A diagram showing the first four spatial dimensions. 1-D: Two points A and B can be connected to a line, giving a new line segment AB. 2-D: Two parallel line segments AB and CD can be connected to become a square, with the corners marked as ABCD. 3-D: Two parallel squares ABCD and EFGH can be connected to become a cube, with the corners marked as ABCDEFGH. 4-D: Two parallel cubes ABCDEFGH and IJKLMNOP can be connected to become a hypercube, with the corners marked as ABCDEFGHIJKLMNOP. In physical terms, dimension refers to the constituent structure of all space (cf. volume) and its position in time (perceived as a scalar dimension along the t-axis), as well as the spatial constitution of objects within—structures that correlate with both particle and field conceptions, interact according to relative properties of mass—and are fundamentally mathematical in description. The concept of dimension is not restricted to physical objects. A tesseract is an example of a four-dimensional object. Related:  Dimensions • .caisson test

Depth = 3rd Dimension Three-dimensional Cartesian coordinate system with the x-axis pointing towards the observer(See diagram description for needed correction.) In physics and mathematics, a sequence of n numbers can be understood as a location in n-dimensional space. When n = 3, the set of all such locations is called 3-dimensional Euclidean space. It is commonly represented by the symbol . This space is only one example of a great variety of spaces in three dimensions called 3-manifolds. Details[edit] Other popular methods of describing the location of a point in three-dimensional space include cylindrical coordinates and spherical coordinates, though there is an infinite number of possible methods. Another mathematical way of viewing three-dimensional space is found in linear algebra, where the idea of independence is crucial. Three-dimensional space has a number of properties that distinguish it from spaces of other dimension numbers. With the space , the topologists locally model all other 3-manifolds.

My Story: Experimenting With Message Passing Software Modules for Arduino Programming I've been fascinated by the idea of being able to build software applications in a way similar to how electronic circuits are built using ICs. That is, by connecting discrete software components together via clearly defined communication pathways. I've begun to use the Arduino development platform to play around with ideas for implementing this type of component-based system. The following describes my first project, which involved creating a small set of very simple modules and a runtime system to host them. Simple Software Module System Description The diagram in Figure 1 shows two modules, A and B, connected by channels ab and ba. Figure 1: Software Modules Modules and Ports Modules are designed to perform a single task (e.g., get a value from an analog pin, monitor the state of a digital input pin, perform a calculation, etc.) or a small group of simple tasks. void Mod1(int InPort1[], ..., int InPortN[], int OutPortN[], ..., int InPortM) { module code } Messages int msg[messageSize];

Networks and dimension Fourth dimension in literature The idea of a fourth dimension has been a factor in the evolution of modern art, but use of concepts relating to higher dimensions has been little discussed by academics in the literary world.[1] From the late 1800s onwards, many writers began to make use of possibilities opened up by the exploration of such concepts as hypercubes and non-Euclidian geometry. While many writers took the fourth dimension to be one of time (as it is commonly considered today), others preferred to think of it in spatial terms, and some associated the new mathematics with wider changes in modern culture. Early influence[edit] Theoretical physicist James Clerk Maxwell is best known for his work in formulating the equations of electromagnetism. Since all the tools for my untyingIn four-dimensioned space are lying,Where playful fancy interspersesWhole avenues of universes..Excerpt from Maxwell's Paradoxical Ode of 1878[4] "..shall we stay our upward course? H.G. Other works[edit] References[edit]

Length = 2nd Dimension Bi-dimensional Cartesian coordinate system In physics, our bi-dimensional space is viewed as a planar representation of the space in which we move, described as bi-dimensional space or two-dimensional space. History of two-dimensional space[edit] Euclid's Elements dealt almost exclusively with two-dimensional geometry, developing such notions as similarity of shapes, the Pythagorean theorem (Proposition 47), equality of angles and areas, parallelism, the sum of the angles in a triangle, and the three cases in which triangles are "equal" (have the same area), among many other topics. The idea of this system was developed in 1637 in writings by Descartes and independently by Pierre de Fermat, although Fermat also worked in three dimensions, and did not publish the discovery.[1] Both authors used a single axis in their treatments and have a variable length measured in reference to this axis. Two-dimensional geometry[edit] Polytopes[edit] Convex[edit] Degenerate (spherical)[edit] Non-convex[edit]

Playing Book « Tilt In the past, when people spent their spare time reading a book, they read paper books. Nowadays though, people use computers, smart phones, or iPads to read during their spare time. However, electronic books cannot provide the analogue aesthetic which can be felt in a paper book. Thus, the graphic designer, Sungshin Yim, created the “Playing book” to fulfil the readers’ emotional needs by applying new techniques and materials and yet keeping the original material of the book, paper. The book designer, Sungshin Yim is showing a playing book that can play music by touching letters. Sungshin will continue to study about the future of the books so she is interested in new materials and new technology. W// www.sungshinyim.com e// olivia.ssyim@gmail.com

Dimensions in Philosophy Function space Examples[edit] Function spaces appear in various areas of mathematics: Functional analysis[edit] Functional analysis is organized around adequate techniques to bring function spaces as topological vector spaces within reach of the ideas that would apply to normed spaces of finite dimension. Bibliography[edit] Kolmogorov, A. See also[edit] Dimension = 1st One-dimensional geometry[edit] Polytopes[edit] The only regular polytope in one dimension is the line segment, with the Schläfli symbol { }. Hypersphere[edit] where is the radius. Coordinate systems in one-dimensional space[edit] The most popular coordinate systems are the number line and the angle.