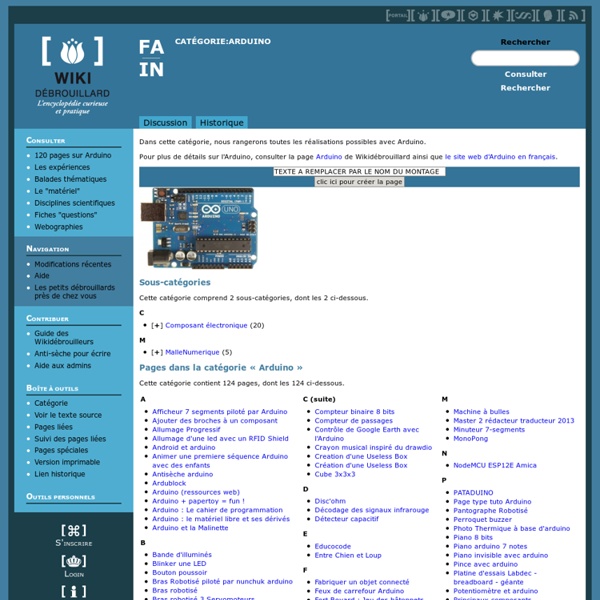 A beginner's guide to Arduino After some years of experimenting with Arduino, I decided that the time has come to share the knowledge I've acquired. So I here it goes, a guide to Arduino, with the bare basics for beginners and some more advanced explanations for people who are somewhat more familiar with electronics. Every step will consist of a detailed explanation, then a summary, followed by a more advanced approach. If you're a complete beginner, I recommend reading the explanation first, and then the summary.

200+ Arduino Projects List For Final Year Students Arduino is a single-board microcontroller. It is intended to make the application of interactive objects or environments more accessible. The hardware consists of an open-source hardware board designed around an 8-bit Atmel AVR microcontroller, or a 32-bit Atmel ARM. Arduino and Python For a project (check out my blog for updates) I'm working on I needed to be able to communicate with my arduino, luckily the arduino can communicate though serial. It turns out almost any programming language can be used for serial communication but python seems to be the easiest so far. I had some problems getting it all to work and finding a basic tutorial online proved very difficult. So hopefully this guide will explain the basics to anyone that is looking to start using the serial functions that the arduino provides. I'm going to assume that if you're reading this you have some knowledge of how an arduino works and how to upload sketches and what not, however I will explain the arduino code when we get there. The python code is very basic but I will do my best to explain it as well.