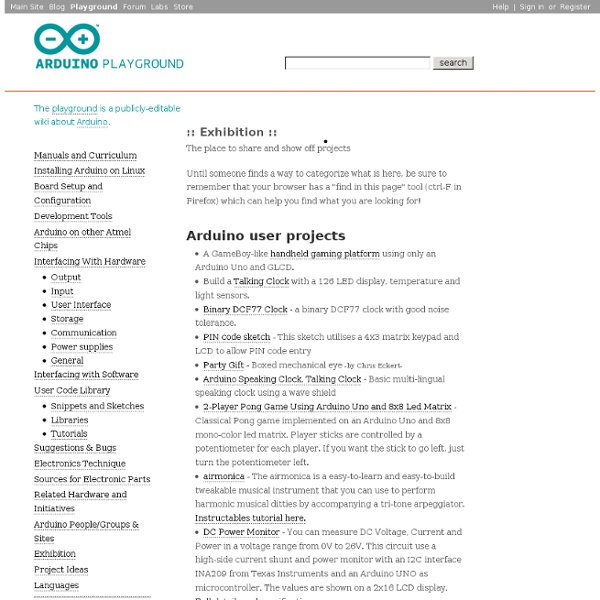 :: Exhibition :: The place to share and show off projects Until someone finds a way to categorize what is here, be sure to remember that your browser has a "find in this page" tool (ctrl-F in Firefox) which can help you find what you are looking for! Arduino user projects How Did I Improve My Central Heating Control with Arduino? - Before I started this project, my central heating was controlled with Danfoss TP7000 room thermostat only by switching heating pump ON-OFF.

How to Build Your Own Cheap, Simple Solar Oven The "Minimum" Solar Box Cooker is a solar oven that you can built quickly from two cardboard boxes. The “Minimum” Solar Box Cooker is a simple box cooker that can be built in a few hours for very little money. When this cooker was designed, it was named it the “Minimum Solar Box Cooker” because, at the time, it represented the simplest design we could devise. What we didn’t communicate with that name was that this is a full-power cooker that works very well, and is in no way minimum as far as its cooking power goes. What You Will Need – Two cardboard boxes. – One sheet of cardboard to make the lid. – One small roll of aluminum foil. – One can of flat-black spray paint (look for the words “non-toxic when dry”) or one small jar of black tempera paint. – At least 8 ounces (250 g) of white glue or wheat paste. – One Reynolds Oven Cooking Bag ®. Building the Base Decide how deep you want your oven to be. Building the Removable Lid Take the large sheet of cardboard and lay it on top of the base.

The Python Tutorial Python is an easy to learn, powerful programming language. It has efficient high-level data structures and a simple but effective approach to object-oriented programming. Python’s elegant syntax and dynamic typing, together with its interpreted nature, make it an ideal language for scripting and rapid application development in many areas on most platforms. The Python interpreter and the extensive standard library are freely available in source or binary form for all major platforms from the Python Web site, and may be freely distributed. The same site also contains distributions of and pointers to many free third party Python modules, programs and tools, and additional documentation. The Python interpreter is easily extended with new functions and data types implemented in C or C++ (or other languages callable from C). This tutorial introduces the reader informally to the basic concepts and features of the Python language and system.

LAN-Party Optimized House - Aurora I live in a LAN-party-optimized house. That is, my house is specifically designed to be ideal for PC gaming parties. It's also designed for living, of course, but all houses have that. Here, let me illustrate: The house has twelve of these fold-out computer stations, six in each of two rooms (ideal for team vs. team games). I also have two big TVs, one 59-inch and one 55-inch, each of which has a selection of game consoles attached. For the 0.001% of you who read my blog before this post: Sorry for the long lack of posts. Hardware The twelve game stations all contain identical hardware: CPU: Intel Core i5-2500 GPU: MSI N560GTX (nVidia GeForce 560) Motherboard: MSI P67A-C43 (Intel P67 chipset) RAM: 8GB (2x4GB DDR3-1333) Monitor: ASUS VE278Q (27" 1080p) At the time I bought the hardware (March 2011), I felt this selection provided the best trade-off between price and performance for gaming machines that need to last at least a few years. Instead, the machines boot off the network. Security