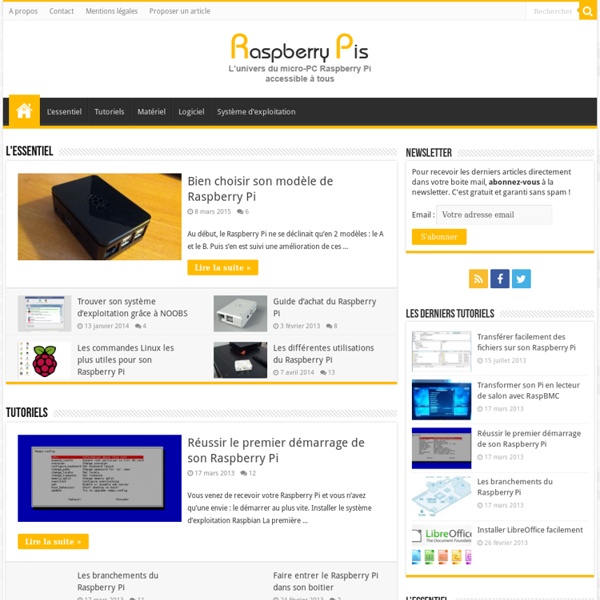 Raspberry Pi Bittorrent Sync - Bitsync Gegevens Categorie: Tutorials Bitsync. OpenStack on RPi (Part 1) Recently I’ve embarked down a course to get OpenStack up and running on the Raspberry Pi. Before we get too deep into the particulars, let’s talk about why such a thing should be done. What could one gain by running OpenStack on the Pi? Who would use it? Jon Rogers » Crashplan on the Raspberry Pi Raspberry Pi (photo from Wikipedia) [edit: With a new release of Java 8 for ARM by Oracle, performance can be radically improved - see the post on Bionoren.com - and thanks for telling me about it in the comments, Brad!] [edit: I've updated a few commands that I didn't get quite right initially, and then a new Linux image for the Raspberry Pi came out, so I've updated some more. This all works with the "Raspian" version "2012-07-15-wheezy-raspbian"]

OpenStack Swift on RPi March 24, 2013 Every attendee at PyCon 2013 got a free Raspberry Pi. So, naturally, the first thing I did was set up OpenStack Swift on it. Cómo dar vuelta a un Raspberry Pi en un dispositivo de almacenamiento de red de baja potencia Mix together one Raspberry Pi and a sprinkle of cheap external hard drives and you have the recipe for an ultra-low-power and always-on network storage device. Read on as we show you how to set up your own Pi-based NAS. Why Do I Want to Do This? OS & Co Back to the Hub. Software & Distributions: Software - an overview. Distributions - operating systems and development environments for the Raspberry Pi. Kernel Compilation - advice on compiling a kernel. Sync Android Contacts, Calendar, and Files to ownCloud Do you dislike Google? I do. I hate the fact that Google wants to record every little bit of information from your life and data mine it to death. And just like how the iPhone requires an Apple ID , Android phones seem to require you to share all your information with Google via a Google account. These discussions online always bring out the Google supporters who will call those who do not want to share info with google ‘paranoid’ or say ‘why would your information be so important’. Listen, I just don’t want a 3rd party company to have information about me, about my schedule, about who I speak with, etc.

Install gphoto2 on your raspberry Via the free software gphoto2 it is possible to connect a digital camera (Canon/Nikon/Olympus, full compatibility list) to your Raspberry Pi in order to remotely take pictures and automatically download them to the Raspberry's memory. Easy case You can install gphoto2 very easily via the command line: Raspberry Pi Owncloud (dropbox clone) Now we have download the software we need to configor it. First off we need to install PHP apc $ sudo pecl install apc After that is done we need to create the apc.ini $ sudo nano /etc/php5/cgi/conf.d/apc.ini How To Disable The Red LED On The Pi Camera Module The Pi camera module includes a red LED in one corner of the PCB. This lights up when the camera is active. It’s really useful in giving a visual indication that the camera is doing something and most of the time you will be glad it is there. However there are a number of reasons you might wish it wasn’t. In my testing here are some of the reasons it can get in the way :

download:baikal [X2Go - everywhere@home] The X2Go project is proud to provide X2Go components in a long-term supported bundle release called: X2Go Baikal (LTS) X2Go Baikal is the 4th bundle release in the history of the X2Go project. Our idea of a bundle release with long term support is to provide reliability for companies / freelancers / consultants /universities who deploy X2Go in highly productive cloud environments. X2Go Baikal will: receive no new features get minimal security updates whenever needed receive fixes for grave bugs be supported till 09/2015

jack.minardi.org : Replace Dropbox with BitTorrent Sync and a Raspberry Pi Notes Everywhere source I like to take long running notes, jotting down an idea here and there when one pops up. I never know which devices I will have with me, so I like to have these notes synced across all of them. Previously I had been using the Chrome plugin QuickNote which is a light weight interface on top of the diigo cloud service. R-Pi NAS Back to RPi Guides. Raspberry Pi Network Attached Storage This project configures your Raspberry Pi to share files with any other computer on your local network. You can add a large hard disk to the RPi and use this to store your important files/photos/videos in a central location.

RPI - BtSYNC Do you want to watch movies from your PC without turning it on? Automatically save files from your PC on an external device? Quit Dropbox and stop uploading personal files to the Cloud?