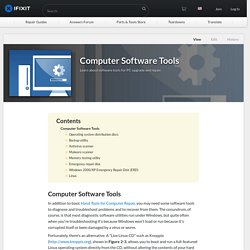 The conundrum, of course, is that most diagnostic software utilities run under Windows, but quite often when you're troubleshooting it's because Windows won't load or run because it's corrupted itself or been damaged by a virus or worm. Fortunately, there's an alternative. A "Live Linux CD" such as Knoppix ( shown in Figure 2-3, allows you to boot and run a full-featured Linux operating system directly from the CD, without altering the contents of your hard drive.

Knoppix and similar Live CD distributions include a plethora of graphics-based tools that allow you to diagnose, test, and burn-in the various hardware components of your system. Figure 2-3: The Knoppix desktop. Softwares. Install and Remove Since version 1.51, CPU-Z includes an installer. 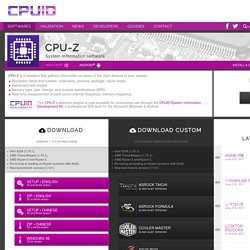 The installation offers several advantages in comparison to the stand-alone version : The installation creates program entries in the start menu and on the desktop. It installs the right binary (x32 or x64) depending on your system. Installation Run the setup executable file, and let it guide you for the installation process. Removal You can remove the program either from the Add or Remove Programs window (from Settings, Control Panel), or choose Uninstall CPU-Z from Start menu, Programs, CPUID, CPU-Z. Configuration file CPU-Z uses a configuration file, cpuz.ini, that allows to set several parameters for the program. Application parameters Special Keys The F5 key allows to save a screenshot as a bmp file in the application directory. Cache Latency Computation The cache latency computation tool allows to gather information about the cache hierarchy of the system.

Windows Reinstall: 10, 8, 7 XP & Vista also installs, repairs & upgrades. Master Tutorial to Make Windows XP Super Fast. This tutorial is meant for increasing the performance of Windows XP, either its a fresh installation or an older one. 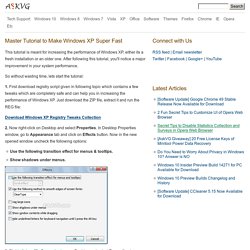 After following this tutorial, you'll notice a major improvement in your system performance. So without wasting time, lets start the tutorial: 1. First download registry script given in following topic which contains a few tweaks which are completely safe and can help you in increasing the performance of Windows XP. Just download the ZIP file, extract it and run the REG file: Download Windows XP For Free and Legally, Straight From Microsoft. As the years progress and Microsoft moves on from Windows 7 into Windows 8 and beyond, it’s certainly starting to feel like Windows XP is just an artifact of the past. 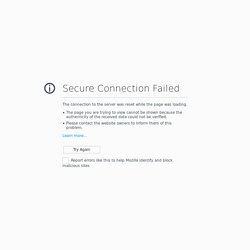 But is it? Windows XP rises from the grave: Simple hack gives you five more years of updates. 15 CMD Commands Every Windows User Should Know. Advertisement Updated by Tina Sieber on January 21, 2017. 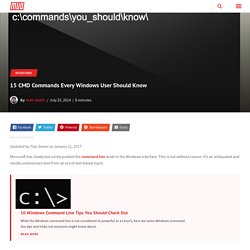 Microsoft has slowly but surely pushed the command line aside in the Windows interface. This is not without reason. It’s an antiquated and mostly unnecessary tool from an era of text-based input. 10 Windows Command Line Tips You Should Check Out 10 Windows Command Line Tips You Should Check Out While the Windows command line is not considered as powerful as a Linux's, here are some Windows command line tips and tricks not everyone might know about. Read More But many commands remain useful, and Windows 8 and 10 even added new features.

An A-Z Index of the Windows CMD command line. How to slipstream an XP disc with SP3 and all other updates. Microsoft has told us that all existing XP updates will still be available to download after support has officially ended. 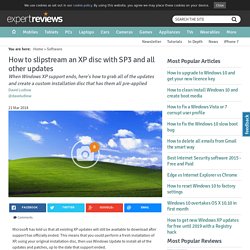 Matthew McMillan. Being a skeptic I usually don't believe something until I see some hard evidence. 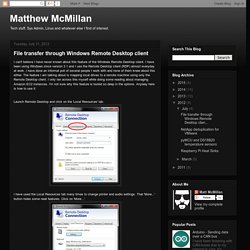 When I am dealing with claims made by a company trying to sell me something I don't believe anything until I see results with my own two eyes. At work we recently began upgrading from a NetApp FAS270C to a FAS2240-2. We needed to upgrade to a faster filer anyway so deduplication wasn't the only selling point but it definitely was of interest to me. We are planning on migrating our VMware virtual machine disks from local storage on our various ESXi servers to centralized storage on the NetApp over NFS mounts. NetApp deduplication has been around for a while now and NetApp recommends enabling dedup for all VMware volumes. 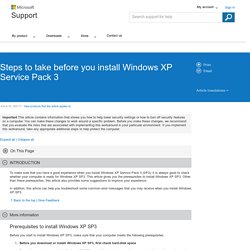 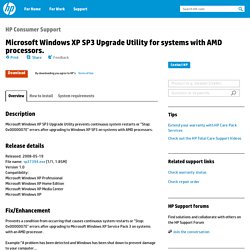 HP browser detection did not automatically detect your browser. Select the appropriate option required by your browser for each step listed below. Instructions Step 1: Click on the security prompt which appears at the top of the browser window then click 'Download File…'Step 2: If a File Download Security Warning appears, click 'Run' to install the framework.Step 3: Click 'OK' to close this window and begin downloading your software. 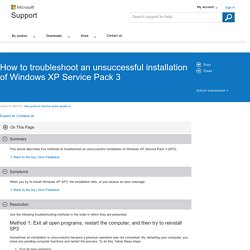 When you try to install Windows XP SP3, the installation fails, or you receive an error message. Use the following troubleshooting methods in the order in which they are presented. Method 1: Exit all open programs, restart the computer, and then try to reinstall SP3 Sometimes an installation is unsuccessful because a previous operation was not completed. By restarting your computer, you close any pending computer functions and restart the process. If this method did not resolve the issue, go to method 2. Microsoft Windows XP Information, Tips, & Tools. Make Windows XP Startup Faster. Edit Article HibernationPrefetch Edited by Aby Watson, Tom Viren, Jack Herrick, Chris Cashwell and 71 others.