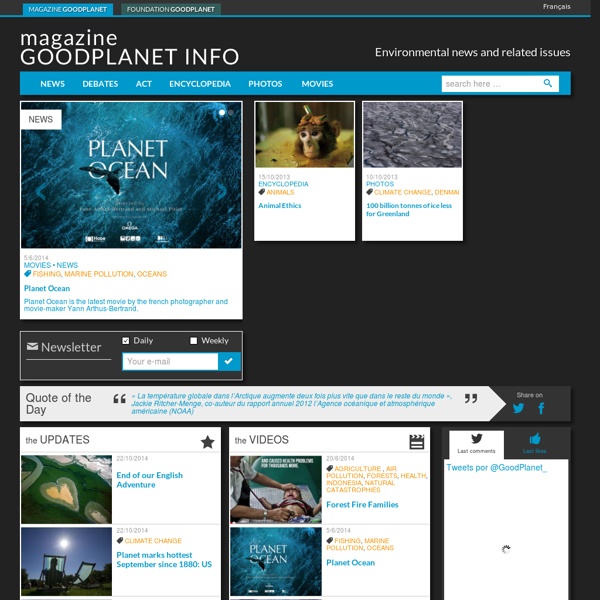 Exxon's Dangerous Outlook Image from ExxonMobil presented its latest Energy Outlook report recently, the 2013 Outlook for Energy: a view to 2040 (pdf). The report is chock full of figures and graphs showing an inexorable rise in global energy demand and supply and the growing market for Exxon’s products. As can be expected, the report shows that despite some recent efficiency gains, the world is on course to consume ever growing amounts of energy, a large proportion of which will likely be derived from fossil fuels. Exxon’s places global growth in energy demand at 35% between 2010 and 2040. In this regard, the report is more or less in line with recent business as usual forecasts from the International Energy Agency (IEA) and the U.S.

August 25, 2012 - Resist Monsanto: Reassert Your Faith in Non-GMO Seeds and Properly Labeled Unnatural Foods Additional Background Civil society organizations, small-holder and organic farmers, local communities, and social movements globally are increasingly resisting ecocidal and socially destructive industrial agriculture. Corporations like Monsanto have created a global food emergency through genetic engineering of seeds, and resisting labeling genetically modified organisms (GMO) grown for food. 90% of U.S. soybeans, corn, canola, and sugar beets are now genetically engineered and routinely inserted into human and animal foods with no labels or independent safety testing – and GMO food is spreading globally. Monsanto's GMO foods have failed to deliver higher yields or drought-resistance. Sustainable, just and equitable food systems are threatened by patents on seed which create monopolies and make it illegal for farmers to save and exchange their own seed. Recently the U.S. moved to deregulate several varieties of GMO crops, despite major associated ecological and social issues.

The water cycle, U.S. Geological Survey (USGS) Water Science School Earth's water is always in movement, and the natural water cycle, also known as the hydrologic cycle, describes the continuous movement of water on, above, and below the surface of the Earth. Water is always changing states between liquid, vapor, and ice, with these processes happening in the blink of an eye and over millions of years. Global water distribution For an estimated explanation of where Earth's water exists, look at the chart below. By now, you know that the water cycle describes the movement of Earth's water, so realize that the chart and table below represent the presence of Earth's water at a single point in time. If you check back in a thousand or million years, no doubt these numbers will be different!

Mapping Stereotypes Get your copy on: Amazon US / Amazon UK / Amazon DE / Amazon FR / Amazon IT / Amazon ES / Amazon Canada / Amazon Japan / Amazon India / Amazon Brazil Atlas of Prejudice: The Complete Stereotype Map Collection China's Wind Power Capacity Grew More than 60% in the First Quarter of 2011 In 2010, China overtook the United States in installed wind power capacity when they reached the 42,287 megawatt benchmark. With their wind power capacity already up 60% in the first quarter of 2011, and plans on track to install even more throughout the year, experts think China’s wind power generation could expand rapidly and perhaps help bring down their carbon emissions by 30%. With global carbon emissions actually up in 2010, this boost in renewable energy for one of the world’s largest emittors of carbon could be a promising sign for the future. Though China’s installed capacity is higher than any other country in the world their per capita wind power capacity and per GDP wind power capacity still pale in comparison to the world leader in both those categories, Denmark. The Danes are crushing us all with their amazing 680.3 MW of capacity per million people — China has 33.6 MW per million people and the US has 129.6 MW per million. Via Clean Technica

What if we never run out of oil? As the great research ship Chikyu left Shimizu in January to mine the explosive ice beneath the Philippine Sea, chances are good that not one of the scientists aboard realized they might be closing the door on Winston Churchill’s world. Their lack of knowledge is unsurprising; beyond the ranks of petroleum-industry historians, Churchill’s outsize role in the history of energy is insufficiently appreciated. Winston Leonard Spencer Churchill was appointed First Lord of the Admiralty in 1911.

One GMO Success We Missed On Election Day Written by Matt McDermott One very interesting ballot initiative we missed: Examiner reports San Juan County, Washington passed Initiative Measure No. 2012-4, making it illegal to “propagate, cultivate, raise or grow plants, animals and other organisms which have been genetically modified.” Exceptions are allowed for GMO cultivation for research and health care use. The initiative does not prohibit the sale of products containing GMO ingredients, nor require labeling of those products made with them. Directory of Water Conservation, Water Research and Water Management Acid Rain Lesson Plan The National Park Service Air Resources Division has developed a series of activities for grades 6-8 to help teach students about acid rain. The site consists of links to the background of the lesson plan and the five activities designed for the students.

50 Free Summer Word Search Puzzles Keep the kids heads' in the game with these summer word search puzzles. It's a fun way to keep the learning going into the summer. Not only will the kids have a blast with these free summer word search puzzles but they'll be able to keep working on their vocabulary and spelling skills over the summer. If you don't find what you're looking for here you can use a free word search maker to create your own summer word search puzzle. The UK's Offshore Turbines Could Run Out of Wind The changing Atlantic jetstream is slowing down the United Kingdom’s wind, raising questions about the efficacy of ambitious offshore wind farm programs. Wind speeds have reduced by 20% since 2008, according to a Telegraph report, and 2010 was the stillest year in the decade. Scientists predict that the jetstream over the UK will continue to slacken over the next four decades as a result of changing solar activity. Meanwhile, the coalition has plans to build thousands of wind turbines in order to meet the European Union goal of supplying 15% of the UK’s energy using alternatives to fossil fuels by 2020.

The Twilight of Petroleum In this post, Antonio Turiel examines the perspectives of oil production in light of some often neglected parameters: the energy density, the energy yield (EROEI), and realistic estimates of new discoveries. As expected, the result are far from supporting the optimism that seems to be prevalent today. Translation By Max Iacono (translated from a previous translation to Italian from Spanish by Massimiliano Rupalti. Can This Farmer Finally Defeat Monsanto? NOTE: This is a guest post from The Safe Food Foundation, an Australian based not-for-profit campaign and advocacy organization. Our mission is to make the World’s food supply clean, safe, nutritious, full of taste and produced in a way that enhances our environment, as well as our social and economic systems. We are working partnership with Slater & Gordon Law Firm to raise the funds required for farmer Steve Marsh’s landmark case. While big business and corporate power may have defeated California’s proposition 37 to get GMOs labeled, the battle for good, safe food rages on. With all the recent media attention surrounding genetically modified (GM) foods, real change is slowly but surely brewing!

Sponsors The World Water Week in Stockholm encourages positive and pro-active efforts by companies on water and development issues and welcomes corporate sponsor partnerships* for the Week. World Water Week Supporters World Water Week Sponsors The World Water Week in Stockholm enables sponsors to highlight their engagement in a variety of ways. Every sponsor gains an array of options for visibility in publications, at event venues, and through publicity or promotion. To discuss the possibilities for your organisation, please contact Mr. Is the U.S. Population Getting Older and More Diverse?, Alexa Jones-Puthoff, U.S. Census Bureau - Newsroom Friday, June 14, 2013 at 8:15 a.m. EDT Alexa Jones-Puthoff, chief of the Population Estimates Branch, will appear live on C-SPAN's "Washington Journal" to discuss characteristics about the U.S. population. View the archived segment Presentation [PDF] Biography: Alexa Jones-Puthoff