Sea Turtle (Chelonioidea) Sea turtles are found in all of the major oceans and smaller seas with the exception of the Arctic Circle as it is generally too cold for sea turtles as they tend to prefer more temperate waters. 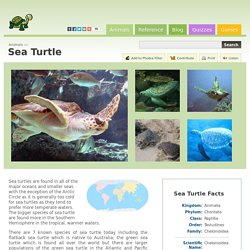 Sea Urchin (Echinoidea) The sea urchin in found across the ocean floors worldwide, but rarely in the colder, polar regions. 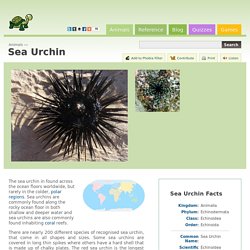 Sea urchins are commonly found along the rocky ocean floor in both shallow and deeper water and sea urchins are also commonly found inhabiting coral reefs. There are nearly 200 different species of recognised sea urchin, that come in all shapes and sizes. Killer Whale (Orcinus Orca) Killer Whales (orca) are found in all the worlds oceans both hot and cold from the freezing waters of the North and South poles to tropical seas. 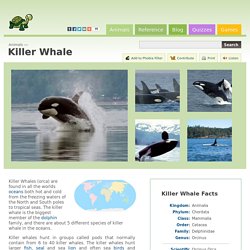 The killer whale has a top speed of around 30 miles an hour but can travel at 26 mph for long periods of time. Female killer whales give birth to one baby killer whale roughly once every five years. Blue Whale (Balsenoptera musculus) Blue Whale Classification and Evolution The Blue Whale is an enormous species of whale that is found in subtropical and polar waters worldwide. 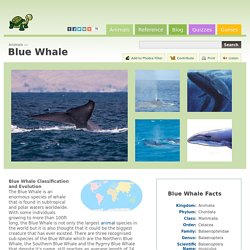 With some individuals growing to more than 100ft long, the Blue Whale is not only the largest animal species in the world but it is also thought that it could be the biggest creature that has ever existed. There are three recognised sub-species of the Blue Whale which are the Northern Blue Whale, the Southern Blue Whale and the Pygmy Blue Whale that despite it's name, still reaches an average length of 24 meters.

Although their enormous size and slow-maturing nature has meant that the world's Blue Whale population has never been greatly numerous, they have drastically declined in numbers due to having been hunted by Humans particularly over the past 100 years. Blue Whales are now legally protected and despite one not having been deliberately caught since the 1970s, their numbers are continuing to fall in much of their natural range. Post Comment. Britannica School. Sand Tiger Shark. Bull Shark. Great White Shark. Britannica School. Octopus. Octopuses are sea animals famous for their rounded bodies, bulging eyes, and eight long arms.

They live in all the world’s oceans but are especially abundant in warm, tropical waters. Octopuses, like their cousin, the squid, are often considered “monsters of the deep,” though some species, or types, occupy relatively shallow waters. Most octopuses stay along the ocean’s floor, although some species are pelagic, which means they live near the water’s surface. Other octopus species live in deep, dark waters, rising from below at dawn and dusk to search for food. Crabs, shrimps, and lobsters rank among their favorite foods, though some can attack larger prey, like sharks. Britannica School. Blue Whale. Bottlenose Dolphin. Britannica School. Seahorse. Britannica School. Sea Turtles. Sea Turtle - 1st Grade Ocean Animal Research. DragonflyTV . Episodes . Living Things . Sea Turtles. 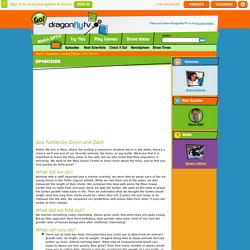 We live in Maui, where the surfing is awesome! Anytime we're in the water, there's a chance we'll see one of our favorite animals, the honu, or sea turtle. We know that it is important to leave the honu alone in the wild, but we also know that their population is shrinking. We went to the Maui Ocean Center to learn more about the honu, and to find out: how quickly do honu grow? What did we do? What did we find out? What can you do? Leatherback Sea Turtles. Leatherback sea turtles are the biggest turtles on Earth. 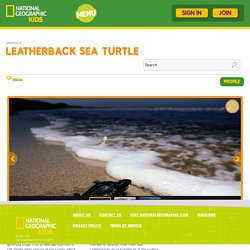 An adult leatherback sea turtle is generally longer than an average-size man is tall. Unlike other species of sea turtles, which have hard shells, the leatherback's shell is leathery; it feels almost rubbery. The shell is black, often speckled with white or yellow spots. These huge reptiles lived 100 million years ago—during the age of dinosaurs—but their future is uncertain. Leatherbacks are one of the more endangered creatures on Earth.

Newly hatched sea turtles instinctively head from the nest to the sea, but in areas where people live, the hatchlings often become confused by lights from houses built along shore. During nesting season, the female comes ashore on a sandy beach, where she digs a hole. As soon as they hatch, they dig their way out of the sandy nest and scurry across the beach to the sea.