10 Things You Can Do to Save the Ocean 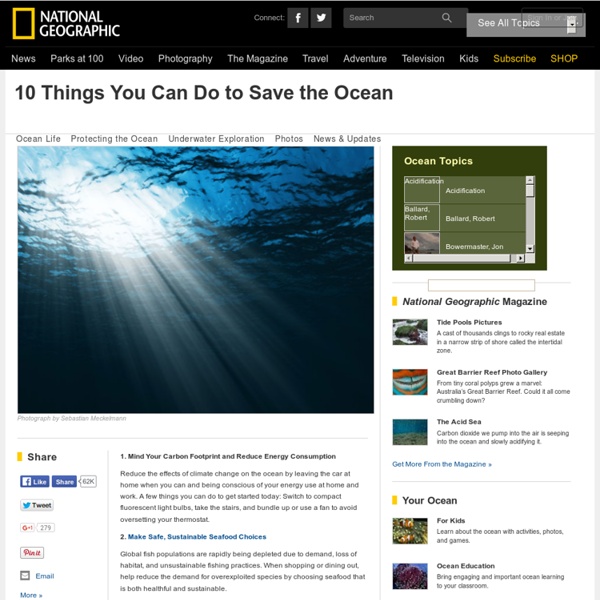 1. Mind Your Carbon Footprint and Reduce Energy Consumption Reduce the effects of climate change on the ocean by leaving the car at home when you can and being conscious of your energy use at home and work. A few things you can do to get started today: Switch to compact fluorescent light bulbs, take the stairs, and bundle up or use a fan to avoid oversetting your thermostat. 2. Global fish populations are rapidly being depleted due to demand, loss of habitat, and unsustainable fishing practices. 3. Plastics that end up as ocean debris contribute to habitat destruction and entangle and kill tens of thousands of marine animals each year. 4. Whether you enjoy diving, surfing, or relaxing on the beach, always clean up after yourself. 5. Certain products contribute to the harming of fragile coral reefs and marine populations. 6. Read pet food labels and consider seafood sustainability when choosing a diet for your pet. 7. 8. 9. 10.

Ocean Power - Is Ocean Power a Viable Energy Source? Dear EarthTalk: Alternative energy sources like wind power, hydrogen and biofuels are getting a lot of headlines these days, but what about efforts to generate electricity from the ocean’s waves?-- Tina Cook, Naples, FL As any board or body surfer will tell you, the ocean’s tidal currents pack considerable wallop. So why wouldn’t it make sense to harness all that formidable ocean power—which is not unlike that of the rivers that drive hydropower dams or the wind that drives wind turbines—to make energy? Is Ocean Power an Option? The concept is simple, says John Lienhard, a University of Houston mechanical engineering professor: “Every day the moon’s gravitational pull lifts countless tons of water up into, say, the East River or the Bay of Fundy. Ocean Wave Power In harnessing wave power, the back-and-forth or up-and-down movement of waves can be captured, for example, to force air in and out of a chamber to drive a piston or spin a turbine that can power a generator.

The Energy Story - Chapter 14: Ocean Energy The world's ocean may eventually provide us with energy to power our homes and businesses. Right now, there are very few ocean energy power plants and most are fairly small. But how can we get energy from the ocean? There are three basic ways to tap the ocean for its energy. Wave Energy Kinetic energy (movement) exists in the moving waves of the ocean. When the wave goes down, air flows through the turbine and back into the chamber through doors that are normally closed. This is only one type of wave-energy system. Most wave-energy systems are very small. Tidal Energy Another form of ocean energy is called tidal energy. Tidal energy has been used since about the 11th Century, when small dams were built along ocean estuaries and small streams. the tidal water behind these dams was used to turn water wheels to mill grains. In order for tidal energy to work well, you need large increases in tides. This facility is called the La Rance Station in France. Ocean Thermal Energy Conversion (OTEC)

Forms of Energy Back to Table of Contents What are the different forms of energy? Energy has a number of different forms, all of which measure the ability of an object or system to do work on another object or system. In other words, there are different ways that an object or a system can possess energy. Here are the different basic forms: Kinetic Energy: Consider a baseball flying through the air. The formula for Kinetic energy, and for some of the other forms of energy described in this section will, is given in a later section of this primer. Potential Energy: Consider a book sitting on a table. Thermal, or heat energy: Consider a hot cup of coffee. Chemical Energy: Consider the ability of your body to do work. Electrical Energy All matter is made up of atoms, and atoms are made up of smaller particles, called protons (which have positive charge), neutrons (which have neutral charge), and electrons (which are negatively charged). Electrochemical Energy: Consider the energy stored in a battery. Sound Energy:

The Law of Conservation of Energy As of July 1, 2013 ThinkQuest has been discontinued. We would like to thank everyone for being a part of the ThinkQuest global community: Students - For your limitless creativity and innovation, which inspires us all. Teachers - For your passion in guiding students on their quest. Partners - For your unwavering support and evangelism. Parents - For supporting the use of technology not only as an instrument of learning, but as a means of creating knowledge. We encourage everyone to continue to “Think, Create and Collaborate,” unleashing the power of technology to teach, share, and inspire. Best wishes, The Oracle Education Foundation Law of Conservation of Energy, Energy, Force and motion, Science Year 9 Introduction The Law of Conservation of Energy states that energy cannot be created or destroyed, just transformed from one form to another. These forms can include kinetic and potential energy as well as light, heat and sound. Energy can also be transferred between objects. Since energy cannot be created or destroyed, the amount of energy present in the universe is always the same. It is simply being transformed and transferred over and over again. The effect of friction Imagine a bouncing ball. See Image 1 Judging by the fact that energy cannot be created or destroyed, it seems reasonable that the ball should continue bouncing forever. Another example is driving in a car. See Image 2 The term efficiency can be used to describe how much energy is lost through friction.

KS3 Bitesize Science - Energy transfer and storage : Revision, Page 2 Power Basic Terminology and Concepts Power The quantity work has to do with a force causing a displacement. Work has nothing to do with the amount of time that this force acts to cause the displacement. Power is the rate at which work is done. The standard metric unit of power is the Watt . Most machines are designed and built to do work on objects. machine. A person is also a machine that has a power rating . Suppose that Ben Pumpiniron elevates his 80-kg body up the 2.0-meter stairwell in 1.8 seconds. Ben's power rating is 871 Watts. The expression for power is work/time. This new equation for power reveals that a powerful machine is both strong (big force) and fast (big velocity). Check Your Understanding Use your understanding of work and power to answer the following questions. 1. 2. 3. 4. 5. 6.