More plastic than fish in the sea by 2050, says Ellen MacArthur. As a record-breaking sailor, Dame Ellen MacArthur has seen more of the world’s oceans than almost anyone else. 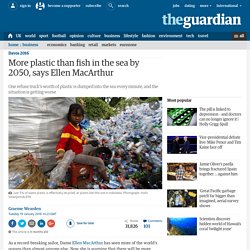 Now she is warning that there will be more waste plastic in the sea than fish by 2050, unless the industry cleans up its act. According to a new Ellen MacArthur Foundation report launched at the World Economic Forum on Tuesday, new plastics will consume 20% of all oil production within 35 years, up from an estimated 5% today. Plastics production has increased twentyfold since 1964, reaching 311m tonnes in 2014, the report says. It is expected to double again in the next 20 years and almost quadruple by 2050. Despite the growing demand, just 5% of plastics are recycled effectively, while 40% end up in landfill and a third in fragile ecosystems such as the world’s oceans. Much of the remainder is burned, generating energy, but causing more fossil fuels to be consumed in order to make new plastic bags, cups, tubs and consumer devices demanded by the economy. Ocean Life Faces Mass Extinction, Broad Study Says. “I see this as a call for action to close the gap between conservation on land and in the sea,” said Loren McClenachan of Colby College, who was not involved in the study. 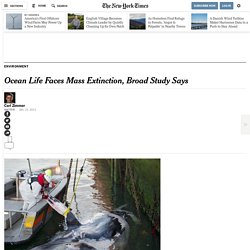 There are clear signs already that humans are harming the oceans to a remarkable degree, the scientists found. Some ocean species are certainly overharvested, but even greater damage results from large-scale habitat loss, which is likely to accelerate as technology advances the human footprint, the scientists reported. Coral reefs, for example, have declined by 40 percent worldwide, partly as a result of climate-change-driven warming. Some fish are migrating to cooler waters already. Black sea bass, once most common off the coast of Virginia, have moved up to New Jersey.

“If you cranked up the aquarium heater and dumped some acid in the water, your fish would not be very happy,” Dr. Crucial Environmental Problems Affecting the Ocean. The Pacific Ocean's growing plastic problem. Sign Up for Our free email newsletters About 1,000 miles north of Hawaii lies an aquatic area known as the "Great Pacific Garbage Patch," which stretches hundreds of miles across the Pacific Ocean and is riddled with tiny shreds of plastic. 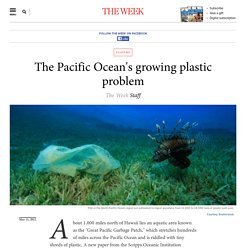 A new paper from the Scripps Oceanic Institution highlights a striking fact about the area: The amount of debris found within has increased 100-fold in the past 40 years, and is upsetting the ocean's delicate ecosystems in a number of surprising ways. Here, a brief guide to the Pacific Ocean's growing plastic problem: Why is there so much plastic there? What items does the plastic originate from? How did researchers figure that out? How does the debris affect sea animals? What are some other issues? Deep Ocean Fish Face Health Problems Due to Man-Made Pollution.

Mar 25, 2015 07:45 PM EDT Deep ocean fish are facing a host of health problems that may be due to man-made pollution, according to a new study. 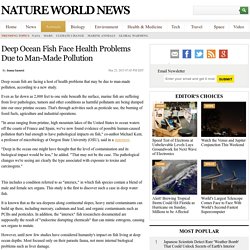 Even as far down as 2,000 feet to one mile beneath the surface, marine fish are suffering from liver pathologies, tumors and other conditions as harmful pollutants are being dumped into our once pristine oceans. That's through activities such as pesticide use, the burning of fossil fuels, agriculture and industrial operations. "In areas ranging from pristine, high mountain lakes of the United States to ocean waters off the coasts of France and Spain, we've now found evidence of possible human-caused pollution that's bad enough to have pathological impacts on fish," co-author Michael Kent, a professor of microbiology at Oregon State University (OSU), said in a statement.

"Deep in the ocean one might have thought that the level of contamination and its biological impact would be less," he added. . © 2016 NatureWorldNews.com All rights reserved. The Ocean Has Issues: 7 Biggest Problems Facing Our Seas, and How to Fix Them. Photo: MikeBaird/Flickr CC The oceans are among our biggest resource for life on earth, and also our biggest dumping grounds. 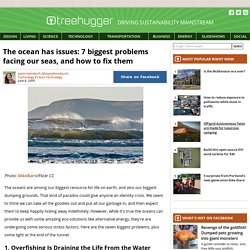 That kind of paradox could give anyone an identity crisis. We seem to think we can take all the goodies out and put all our garbage in, and then expect them to keep happily ticking away indefinitely. However, while it's true the oceans can provide us with some amazing eco-solutions like alternative energy, they're are undergoing some serious stress factors.

Here are the seven biggest problems, plus some light at the end of the tunnel. 1. Overfishing is having some serious impacts on our oceans. There is much to be desired in the ways we fish. Reasons for overfishing are obvious in some ways, in that there are a lot of people who like to eat a lot of fish. Knowledge of what seafood can be sustainably eaten, whether that is the species of seafood or the method by which it is caught, is a must in order to help keep the ocean's fisheries healthy. 2. Photo: jurvetson.