Pierre Trudeau Called It 'Absurd' That Canadians Must Be Alike. As Donald Trump prepares to move into the White House, a quote from a former Canadian prime minister advocating for diversity has found renewed relevance. 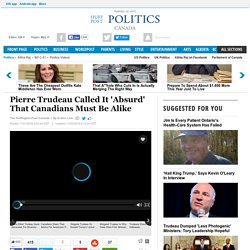 Pierre Elliott Trudeau championed his immigration policy in a 1971 speech to the Ukrainian-Canadian Congress, pointing out that there's "no such thing as a model or ideal Canadian. " He warned his Winnipeg audience that the "absurd" concept of an "all-Canadian' boy or girl" is nothing more than a “disastrous” ideological pursuit. Some academics called Trudeau’s progressive immigration policy one designed to both pacify the growth of Quebec nationalism and inject the country’s economy with fresh ambition and business opportunities. The senior Trudeau carried a similar theme from a 1969 speech he delivered in Washington, D.C. when he famously likened living next to the U.S. to “sleeping with an elephant.” “No matter how friendly and even-tempered is the beast, if I can call it that, one is affected by every twitch and grunt,” he said. 4 stratégies pour finir l’année sur une note positive! 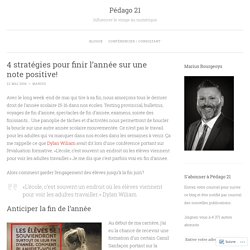 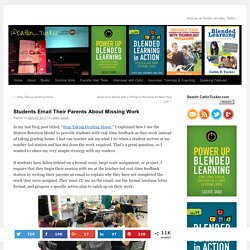 I had one teacher ask me what I do when a student arrives at my teacher-led station and has not done the work required. That’s a great question, so I wanted to share my very simple strategy with my readers. If students have fallen behind on a formal essay, large scale assignment, or project, I require that they begin their session with me at the teacher-led real-time feedback station by writing their parents an email to explain why they have not completed the work they were assigned. They must CC me on the email, use the formal business letter format, and propose a specific action plan to catch up on their work. 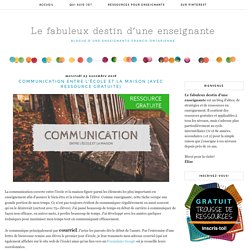 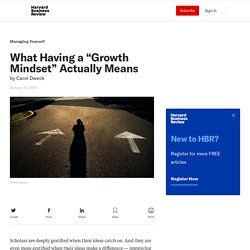 And they are even more gratified when their ideas make a difference — improving motivation, innovation, or productivity, for example. But popularity has a price: people sometimes distort ideas, and therefore fail to reap their benefits. This has started to happen with my research on “growth” versus “fixed” mindsets among individuals and within organizations. To briefly sum up the findings: Individuals who believe their talents can be developed (through hard work, good strategies, and input from others) have a growth mindset. In the wake of these findings, “growth mindset” has become a buzzword in many major companies, even working its way into their mission statements. I already have it, and I always have. Even if we correct these misconceptions, it’s still not easy to attain a growth mindset. To remain in a growth zone, we must identify and work with these triggers. The World's Most Spoken Languages And Where They Are Spoken.

This beautifully illustrated infographic (above), designed by South China Morning Post’s graphics director Alberto Lucas Lopéz, shows the most spoken known languages in the world and where they’re spoken by the 6.3 billion people included in the study. 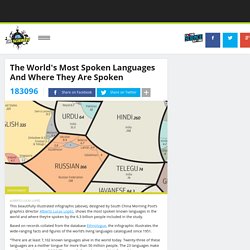 Based on records collated from the database Ethnologue, the infographic illustrates the wide-ranging facts and figures of the world’s living languages catalogued since 1951. “There are at least 7,102 known languages alive in the world today. Twenty-three of these languages are a mother tongue for more than 50 million people. The 23 languages make up the native tongue of 4.1 billion people,” says Lopez on his infographic. “We represent each language within black borders and then provide the numbers of native speakers (in millions) by country. You can see the full pie chart in all its technicolor glory here. Relief Teaching IdeasFolded Paper Bookmarks - Relief Teaching Ideas. Voici à quoi ressemblent les classes à travers le monde.

Bilingual Babies Have More Flexible Brains. Babies who are exposed to two languages (not including baby talk) instead of one during the first year of their life may develop a cognitive advantage over their monolingual counterparts, attaining better problem-solving skills. 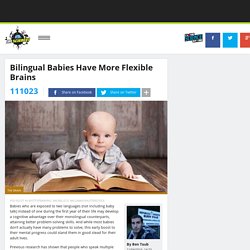 And while most babies don’t actually have many problems to solve, this early boost to their mental progress could stand them in good stead for their adult lives. Previous research has shown that people who speak multiple languages tend to have enhanced connectivity in areas of the brain involved in executive function, which refers to a range of cognitive capabilities related to planning, reasoning and problem solving. However, researchers from the University of Washington were keen to learn if this neurological side-effect of multilingualism could be detected in babies who had not yet begun to talk.

This outcome indicates that, even before babies start talking, they are able to recognize linguistic sounds. Confessions of a Teaching Junkie: The BEST First Day Ever! I think that I had the best first day ever in all of my MANY years of teaching! 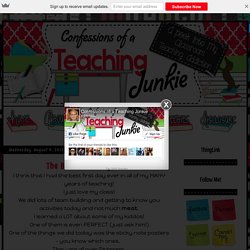 I just love my class! We did lots of team building and getting to know you activities today and not much meat.