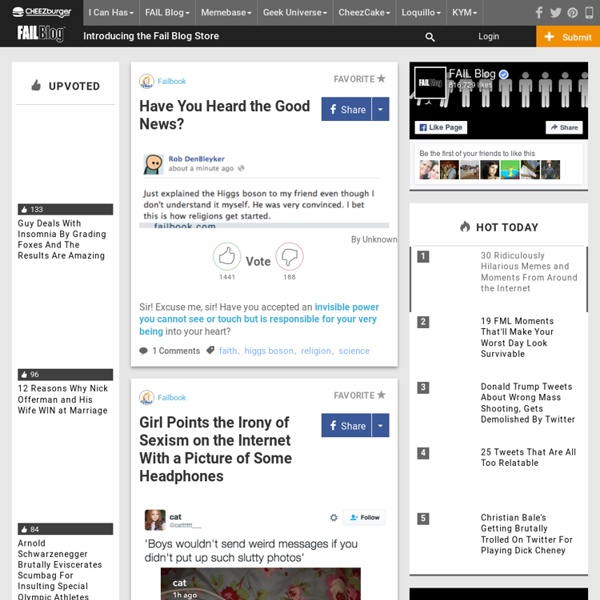 Funny Pictures at WalMart Cute Baby Animals These pictures of baby animals were taken mainly in the wild, in the national parks and game reserves of Botswana, Zambia, and South Africa. As with the young of domestic animals, baby wild animals have a special appeal and it’s magical to see them in their own habitat. I’ve included on this page pictures of baby foxes,baby raccoons, baby giraffes, baby cats, baby elephants, baby bears… ← Older Comments Related Posts Adorable Baby Animal Pictures (Part 1) Ten Best Germans… Most Upvoted 898 votes 9 Out Of 10 People Won't See This Illusion 6 Animals That Just Don't Give A F#@k The Tasmanian devil is nearly identical to the wolverine in pop culture: We know that they're smallish mammals known for their viciousness and fury. And, once again, we see that they are substantially more wuvable than we've been led to believe -- just look at that little guy! Is he wearing a wee cardigan? How precious!

djmick V2: All Things Sexy & Cool July 29th, 2016 I Like The Look Of This Hacklberg Hottie If you stopped by Witches last night for the B3 Bavarian Beer Buffet you’d have been greeted by the stunning Hacklberg hottie featured in this gallery. No... July 28th, 2016 36 Pictures Of Pretties At The Pool Gay Bigfoot & the 7 Weirdest Mythical Creatures in the World It's easy to feel a little down in the morning, as you slump over your wilting shitflakes and ruminate on the day of savage tedium that lies ahead. However, such existential misery can be allayed simply by saying to oneself, "No matter how dull, desperate and lonely my life has become, I nevertheless live in a world where fish can launch fireballs." On certain stretches of the Mekong River, an evening walker can behold a magical sight. At around 8pm during the full moon of October, hundreds of egg-sized balls of red flame rise from the water like a myriad misdirected Hadoukens, floating up towards the stars, where they quietly disappear. Locals claim that these fireballs are caused by an eel called the Phaya Naga, specimens of which have allegedly been found. According to legend, the fireballs are an offering of thanks to Buddha, which seems a little ill-advised, even if you are a deity, your first reaction to being pelted with fireballs is probably not going to be, "You're welcome."

Portraits with Props: 16 Pics That Prove This is a Terrible Idea from Look What I Found With Your Ladder With Your Oversized Gameboy With Your Fetus With Your Chainsaw With Your Giant Cigarettes Dance Dance Dissolution: The Electric Daisy Carnival's Fresh Hell Sure, but I've been experiencing dance music soberly on and off for all my life. Not THIS dance music, per se, but still. I'd compare it more to going to an orgy as a voyeur and still being bored. But then I ate pot and enjoyed myself anyway, soooo... Now, don't say something you might need to take back... Your mistake is in assuming this is dance music.