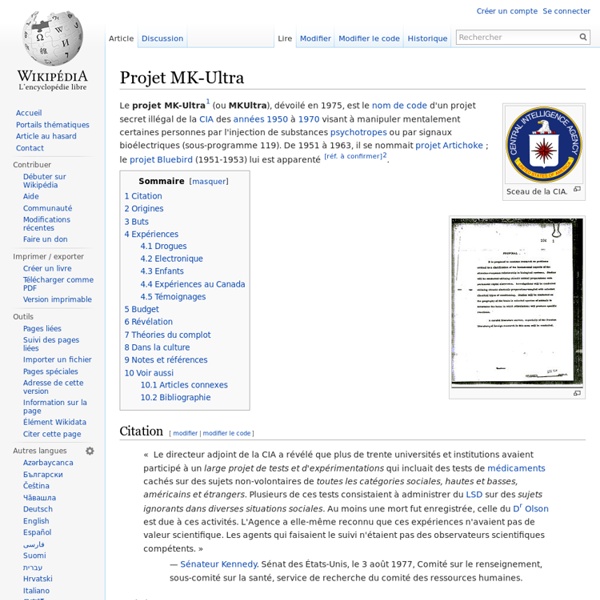 Girls sue to block participation of transgender athletes HARTFORD, Conn. -- The families of three female high school runners filed a federal lawsuit Wednesday seeking to block transgender athletes in Connecticut from participating in girls sports. Selina Soule, a senior at Glastonbury High School, Chelsea Mitchell, a senior at Canton High School and Alanna Smith, a sophomore at Danbury High School are represented by the conservative nonprofit organization Alliance Defending Freedom. They argue that allowing athletes with male anatomy to compete has deprived them of track titles and scholarship opportunities. “Mentally and physically, we know the outcome before the race even starts," said Smith, who is the daughter of former Major League pitcher Lee Smith. “That biological unfairness doesn't go away because of what someone believes about gender identity.

Les frères Dulles & MK ULTRA Scare them, you can herd them! Wade Michael Page, 40 years old, is the latest DARK KNIGHT to run amok in America. The DARK KNIGHT Wade Page like the JOKER James Holmes is an Enigma Wrapped inside a Puzzle and we still don’t have a clue of what is really going on. Within 16 days of each other, the DARK KNIGHTS’ body count in America among the innocent stands at 18 dead and over 70 wounded and maimed; and that is no conspiracy theory.

Iran is forcing thousands of gay people to have gender reassignment surgery against their will or face execution IRAN is forcing thousands of gay people to undergo gender reassignment surgeries in a sick bid to “cleanse” the country of homosexuality. The Islamic Republic legalised transsexuality in 1987 and is second only to Thailand in its number of trans surgeries. However, prominent LGTB activists have told Sun Online that these procedures are part of a disturbing programme fuelled by homophobia. The Dulles Brothers The Dulles Brothers ...how to wreak havoc in Guatemala and Iran... “There is, as far as I know, only one certain rule in international relations. Interference by one country in the affairs of another causes resentment. It is sure to produce a result exactly the opposite of that intended. . .” [1] These are the words of none other than Allen W.

Fat fetishism Fat fetishism is sexual attraction to overweight or obese people due to their weight and size.[1][2] A variety of fat fetishism is feed(er)ism or gaining, where sexual gratification is obtained not from the fat itself but from the process of gaining, or helping others gain, body fat.[3] Fat fetishism also incorporates stuffing and padding, whereas the focus of arousal is on the sensations and properties of a real or simulated gain. Attraction[edit] Physical attraction of 47 male fat admirers (FA, in red) towards 10 female figures from the given BMI range, compared with a control group (CG, in blue)[4]

CIA Confirms Role in 1953 Iran Coup Have the British Been Meddling with the FRUS Retrospective Volume on 1953? Foreign Office Worried over “Very Embarrassing” Revelations, Documents Show The United Kingdom sought to expunge "very embarrassing" information about its role in the 1953 coup in Iran from the official U.S. history of the period, British documents confirm. basement dweller (n. pl. basement dwellers) 1. Any one inhabitant of a subjugated or marginalized minority relegated to a basement in respect to a bureaucracy and/or geographical location in an office environment. Despite oppression from contact with the outside world and natural-environmental elements (i.e. sun, fresh air), basement dwellers often find unity amongst co-habitants and enjoy a jovial air.

CIA Admits It Was Behind Iran's Coup Sixty years ago this Monday, on August 19, 1953, modern Iranian history took a critical turn when a U.S.- and British-backed coup overthrew the country's prime minister, Mohammed Mossadegh. The event's reverberations have haunted its orchestrators over the years, contributing to the anti-Americanism that accompanied the Shah's ouster in early 1979, and even influencing the Iranians who seized the U.S. Embassy in Tehran later that year. But it has taken almost six decades for the U.S. intelligence community to acknowledge openly that it was behind the controversial overthrow. Published here today -- and on the website of the National Security Archive, which obtained the document through the Freedom of Information Act -- is a brief excerpt from The Battle for Iran, an internal report prepared in the mid-1970s by an in-house CIA historian.