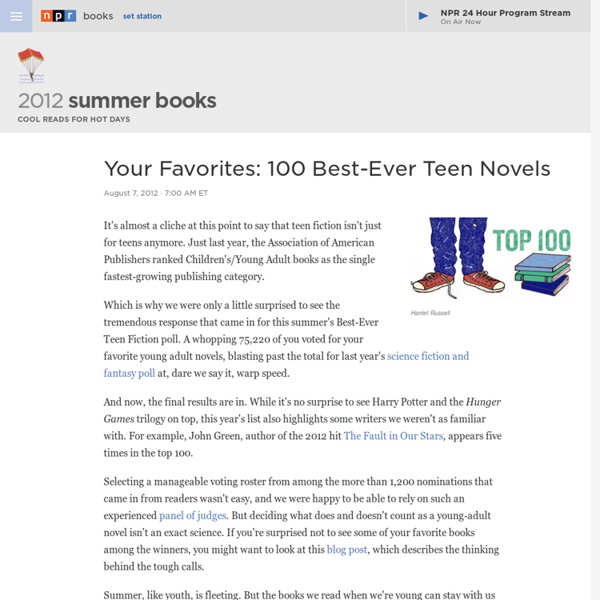 It's almost a cliche at this point to say that teen fiction isn't just for teens anymore. Just last year, the Association of American Publishers ranked Children's/Young Adult books as the single fastest-growing publishing category. Which is why we were only a little surprised to see the tremendous response that came in for this summer's Best-Ever Teen Fiction poll. A whopping 75,220 of you voted for your favorite young adult novels, blasting past the total for last year's science fiction and fantasy poll at, dare we say it, warp speed. And now, the final results are in. While it's no surprise to see Harry Potter and the Hunger Games trilogy on top, this year's list also highlights some writers we weren't as familiar with. Selecting a manageable voting roster from among the more than 1,200 nominations that came in from readers wasn't easy, and we were happy to be able to rely on such an experienced panel of judges. Summer, like youth, is fleeting.

Exploration and Trade Tools developed in the Middle Ages for exploration continued to be used during the Renaissance. One of these was the astrolabe, a portable device used by sailors to help them find their way. By measuring the distance of the sun and stars above the horizon, the astrolabe helped determine latitude, an important tool in navigation. Another tool, the magnetic compass, which had been invented in the twelfth century, was improved upon during the Renaissance. Maps, too, became more reliable as Portuguese map makers, called cartographers, incorporated information provided by travelers and explorers into their work. Shipbuilding also improved during the Renaissance, as large ships called galleons became common.

The Ultimate 50 Ways to Find New Books to Read Advertisement Do you have a “Benjamin Franklin” in your life? I’m not just talking about $100 bills, but more importantly someone who plays the same role as America’s favorite statesman did in molding American thinking. One of Franklin’s little known contributions was The Library Company. Literature is Great Introduction This lesson is about literature, with a focus on the UK. It develops the students’ ability to speak in long turns and use idioms, which originate from the works of Shakespeare. Cognitive processing reading skills are also developed through speed reading an authentic text based on the life of Charles Dickens. The students’ own experiences and opinions form the basis of all discussions. Topic Looking for Alaska Questions Answered selfishdisasterology asked: Who are Tori and Ani? Oh God I am so old and that book is so old. (Tori Amos and Ani Difranco.) Anonymous asked: Does it matter how Alaska died? So there are going to be questions in your life—big questions—that need to be answered and deserved to be answered but nonetheless go unanswered.

Audio Books & Poetry : Free Audio : Download & Streaming LibriVox recording of 12 CREEPY TALES BY EDGAR ALLAN POE(1809 - 1849) This is a collection of 12 creepy stories by that master of creepiness, Poe. The Black Cat; The Fall of the House of Usher, The Raven; The Tell Tale Heart, The Masque of the Red Death, the Premature Burial and six others that are a shuddering delight to read and listen to. Turn off the lights, settle down and hear these stories read to you as only LibriVox readers can perform them. ya books - Isn't She Lovely: Black Girls in Young Adult Books The First Part Last - Angela Johnson Publication Date: 2010-01-05 This little thing with the perfect face and hands doing nothing but counting on me. And me wanting nothing else but to run crying into my own mom's room and have her do the whole thing.

Finnish Photographer Captures The Most Otherworldly Night Pictures You’ll Ever See On Instagram Many amateur photographers find managing lighting to be problematic, but not self-taught Mikko Lagerstedt, who taked his stunning photographs at night. Popular on Instagram, his breathtaking photographs of star-strewn skies, fantastically lit trees, and beautiful landscape shots, are all taken later than your bed time. You wouldn’t believe that a 640×640 picture could be that impressive, but Mikko is here to prove you wrong.

Lord of the Flies Published in 1954, Lord of the Flies was Golding’s first novel. Although it was not a great success at the time—selling fewer than 3,000 copies in the United States during 1955 before going out of print—it soon went on to become a best-seller. It has been adapted to film twice in English, in 1963 by Peter Brook and 1990 by Harry Hook, and once in Filipino (1976). Free Printable Bookmarks for Children We've got free printable bookmarks here for kids of all ages - great for teachers to hand out in class, parents to slip into a party bag, grandparents to use to encourage kids to read. There is nothing like an appropriate bookmark to prompt a child to turn the pages! We are constantly adding more bookmarks and have tried to include some for most of our themes and holidays, and to provide something for boys and girls of all ages. Please explore our printable bookmarks below! ..or Explore All Bookmarks Choose from two versions of these fun high frequency word bookmarks - one with white backgrounds, and one in full colour (as seen below).

Virtual Field Trip to Ellis Island World War II and the Postwar Period The United States entered World War II in 1942. During the war, immigration decreased. NoveList Latest News & Events Latest Articles Technology & Services Discovery & Services A literary history of the English language in one map Here's an animated map of recent literary history as read through 3.5 million English language books, since 1800. If you, as we were, are wondering "How on earth was this made?", we'll tell you. In 2013, Kalev Leetaru approached the Internet Archive, asking them if he could extract every image and mention of a location from the 600 million pages featured in their digitised book collection. He did so alongside the basic metadata about the books, as well as nearby images - which now form an archive on Flickr, (currently) over 50,000 pages deep and growing. In September, Kalev’s GDELT project used 160 processors and a terabyte of RAM from Google Cloud to process the more than 3.5 million English language books since 1800, for various pieces of information.

I added this one because it would be a great resource for me deciding my personal favorite books. by harmonyhunt5 Apr 12