Artist and Filmmaker Jeremy Collins on Climbing, Creativity, and Balance. If you’ve looked at an issue of Alpinist or Rock & Ice in the past dozen or so years, you’ve seen Jeremy Collins’s drawings and maps gracing their pages and covers. 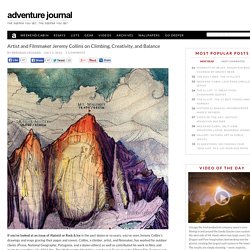 Collins, a climber, artist, and filmmaker, has worked for outdoor clients (Prana, National Geographic, Patagonia, and a dozen others) as well as contributed his work to films and made his own films. His 2011 film, The Wolf and the Medallion, won best in Festival at the 5Point Film Festival and the Creative Excellence Award at the Banff Mountain Film Festival, and recently became available online. With one of his newest projects, Drawn, a book-and-film narrative spanning three continents and several years, Collins hoped to raise $50,000 on Kickstarter. Almost 800 donors pledged $70,000 to the campaign, which ended May 18.

Now he’s putting together the film project, which will premiere this fall at the Banff Mountain Film Festival. 1. Usually I have my headphones in so they won’t ask. If not, they will: A. 2. 3. 4. 5. 6. 7. Listich's Sitting Room. Marketing Influence: The Power of Persuasion. Waterbury Center Vacation Rental - VRBO 3673963ha - 0 BR VT Cottage, Country Cottage with Beautiful Scenery and Privacy. Creative Action Network. Cricket Trailer. Artist and Filmmaker Jeremy Collins on Climbing, Creativity, and Balance. AT Overland. The AT Chaser trailer is reminiscent of the classic lines of the military 416 & 101 trailers, but the similarity ends there. 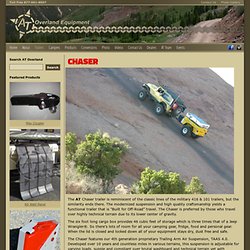 The modernized suspension and high quality craftsmanship yields a functional trailer that is “Built for Off-Road” travel. The Chaser is preferred by those who travel over highly technical terrain due to its lower center of gravity. The six foot long cargo box provides 46 cubic feet of storage which is three times that of a Jeep Wrangler®. So there’s lots of room for all your camping gear, fridge, food and personal gear. When the lid is closed and locked down all of your equipment stays dry, dust free and safe. The Chaser features our 4th generation proprietary Trailing Arm Air Suspension, TAAS 4.0. 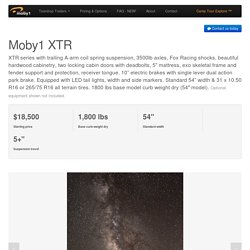 The XTR is built around the principle that one can hook up their vehicle to a compact but fully self-contained trailer and head out into the wilderness and not look back. The concept behind the Moby1 is to make your journey into rugged and remote locations as comfortable and convenient as possible, to be light and mobile. The Education of a Reluctant Businessman with Yvon Chouinard. 14 Thought Provoking Illustrations Each Contain A Hidden Message. Polish artist Pawel Kuczynski has been working since 2004 to create a series of paintings that show us the world behind the world. 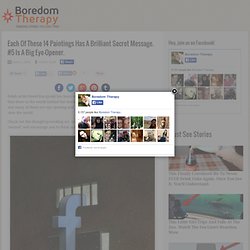 Each clever painting has a hidden message, and many of them are eye opening and remind us that there is more than one way to view the world. Check out this thought-provoking art, and perhaps it will make you question what’s ‘normal’ and encourage you to think outside the box. Source: Pawel Kuczynski via Imgur Were you able to decipher the hidden message in each of the drawings?

If so, you’ll probably agree they’re truly amazing and though-provoking. Share this with your friends and family, everyone should see these incredible paintings. Share it with your friends! Here's a look inside a typical VC's pipeline (a must-read for entrepreneurs) When I meet with entrepreneurs, I am often asked about the VC “pipeline.” 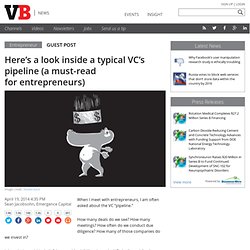 How many deals do we see? How many meetings? How often do we conduct due diligence? How many of those companies do we invest in? I thought it would be helpful to provide visibility about the VC pipeline, while also outlining what helps a company move from an intro meeting into a closed investment. In order to make 10 investments, the average venture capital firm reviews approximately 1,200 companies. What is a Warrior? The Psychedelic Experience. To Be A Poet.

2014 Resolution: Do Things, Make Things. My parents gave me Brandon Stanton’s Humans of New York book for a holiday gift, and I spent the next hour flipping from cover to cover, in awe and admiration of Stanton’s work, and the depth of humanity he’d been able to experience through his portraits and interviews. 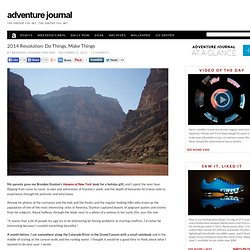 Among his photos of the costumes and the kids and the freaks and the regular-looking folks who make up the population of one of the most interesting cities in America, Stanton captured dozens of poignant quotes and stories from his subjects. About halfway through the book, next to a photo of a woman in her early 20s, was this one: “It seems that a lot of people my age try to be interesting by having problems or starting conflicts. I’d rather be interesting because I created something beautiful.” 2014 Goals: 1. Are you going to climb Everest or win an Oscar in 2014? About a year ago, David Wong wrote a story for Cracked.com titled “6 Harsh Truths That Will Make You A Better Person.”