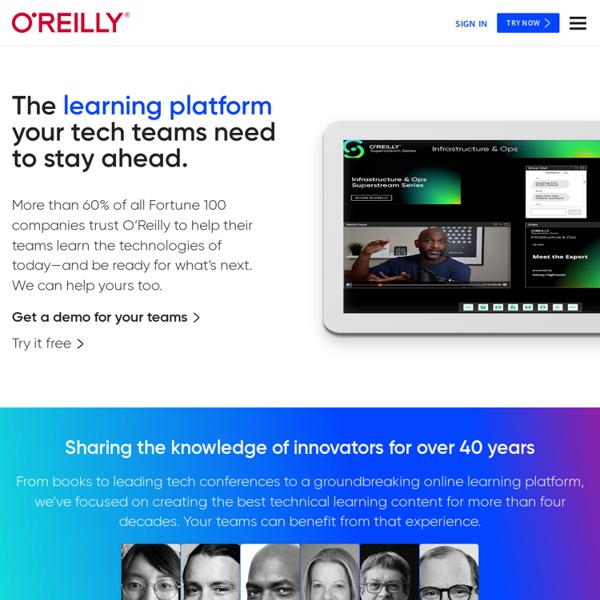 What is O'Reilly Media? Technology Books, Tech Conferences, IT Courses & News O'Reilly spreads the knowledge of innovators through its technology books, online services, magazines, research, and tech conferences. Since 1978, O'Reilly has been a chronicler and catalyst of leading-edge development, homing in on the technology trends that really matter and galvanizing their adoption by amplifying "faint signals" from the alpha geeks who are creating the future. An active participant in the technology community, O'Reilly has a long history of advocacy, meme-making, and evangelism.

Questionnaire design Perhaps the most important part of the survey process is the creation of questions that accurately measure the opinions, experiences and behaviors of the public. Accurate random sampling and high response rates will be wasted if the information gathered is built on a shaky foundation of ambiguous or biased questions. Creating good measures involves both writing good questions and organizing them to form the questionnaire. Questionnaire design is a multistage process that requires attention to many details at once. Designing the questionnaire is complicated because surveys can ask about topics in varying degrees of detail, questions can be asked in different ways, and questions asked earlier in a survey may influence how people respond to later questions. Researchers also are often interested in measuring change over time and therefore must be attentive to how opinions or behaviors have been measured in prior surveys.

Latest Technology News Stephen Henson is responsible for the tiny piece of software code that rocked the internet earlier this week. The key moment arrived at about 11 o'clock on New Year's Eve, 2011. With 2012 just minutes away, Henson received the code from Robin Seggelmann, a respected academic who's an expert in internet protocols. Premise Data General How many countries do you operate? We’re currently in more than 30 countries across six continents. Technology Windows XP Death Did Fuel Some PC Spending By Sean Patterson · April 10, 2014 Windows XP is now officially dead. Earlier this week Microsoft officially ended support for the OS, which had become one of the most popular in history. PC manufacturers had hoped that the death of XP would fuel sales of new … Infographic Shows History Of Web Design By Chris Crum · April 10, 2014 Spending every day on the Internet, it’s sometimes easy to forget or to take for granted just how far the web has come, especially in terms of design.

digital object identifier (en) A digital object identifier (DOI) is a serial code for objects, such as an electronic document. Metadata about the object is stored in association with the DOI name. It may include a location, such as a URL, where the object can be found. Google Chrome To Be Used by U.S. State Department The employees of the U.S. State Department are apparently like employees anywhere. they hate using outdated browsers that don’t support newer protocols and features that websites are putting into their designs. So, when Secretary of State Hillary Clinton held a Town Hall meeting for those employees, they asked her about it. “Madame Secretary, this next question is probably one of the most discussed topics on the [State Department employee] sounding board. Todd Schwarz asks: Are there any steps that can be taken to accelerate the upgrade of Internet Explorer on department systems?” The room roared with laughter and applause at the question.

Interview with Rick Smolan on ‘The Human Face of Big Data’ Manu: Rick, can you tell us a bit about yourself? I saw in your TED talk that you used to be a photo journalist, so how did you get started on this journey? Rick Smolan: Yes, I was always very curious as a person so it’s interesting that I’d end up in a job where I get paid to be curious.

Report: Hackers Seized Control of Computers in NASA's Jet Propulsion Lab Illustration showing NASA's newest Martian rover, the Curiosity, which will look for past or current conditions favorable for life when it lands later this year. Photo: NASA/JPL Hackers seized control of networks at NASA’s Jet Propulsion Laboratory last November, gaining the ability to install malware, delete or steal sensitive data, and hijack the accounts of users in order to gain their privileged access, according to a report from the National Aeronautics and Space Administration’s inspector general. The breach, originating from Chinese-based IP addresses, allowed the intruders to compromise the accounts “of the most privileged JPL users,” giving them “full access to key JPL systems,” according to Inspector General Paul K. Martin in a report to Congress (.pdf).

Redshift Performance & Cost At Airbnb, we look into all possible ways to improve our product and user experience. Often times this involves lots of analytics behind the scene. Our data pipeline thus far has consisted of Hadoop, MySQL, R and Stata. We’ve used a wide variety of libraries for interfacing with our Hadoop cluster such as Hive, Pig, Cascading and Cascalog. However, we found that analysts aren’t as productive as they can be by using Hadoop, and standalone MySQL was no longer an option given the size of our dataset. We experimented with frameworks such as

Trending Technology News over last 3 days Trending Technology News over last 3 days Wired Space Photo of the Day: Moon Shadow Over Neptune Wired In 2009, amateur image processor (and philosophy professor) Ted Stryk discovered something no one had recognized before — images that show the shadow of Despina in transit across Neptune’s blue cloud tops. SQL i/ˈɛs kjuː ˈɛl/,[4] or i/ˈsiːkwəl/;[5] Structured Query Language[6][7][8][9]) is a special-purpose programming language designed for managing data held in a relational database management system (RDBMS), or for stream processing in a relational data stream management system (RDSMS). Originally based upon relational algebra and tuple relational calculus, SQL consists of a data definition language, data manipulation language, and Data Control Language. The scope of SQL includes data insert, query, update and delete, schema creation and modification, and data access control. Although SQL is often described as, and to a great extent is, a declarative language (4GL), it also includes procedural elements. SQL was one of the first commercial languages for Edgar F.

Stealth Search Engine Offers Private Internet Browsing The Spark of Genius Series highlights a unique feature of startups and is made possible by Microsoft BizSpark. If you would like to have your startup considered for inclusion, please see the details here. Name: Stealth Quick Pitch: Search the web anonymously Genius Idea: Stealth is a search engine that does not store cookies, track IP addresses or save search terms. Your internet footprint can be minimized with a new stealthy search.

MapReduce Tutorial This section provides a reasonable amount of detail on every user-facing aspect of the MapReduce framework. This should help users implement, configure and tune their jobs in a fine-grained manner. However, please note that the javadoc for each class/interface remains the most comprehensive documentation available; this is only meant to be a tutorial. Let us first take the Mapper and Reducer interfaces. Panasonic, Samsung Among Companies Pitching Green Products at CES Pansonic's booth at this year's CES in Las Vegas For technology and electronics geeks, CES in Las Vegas this week is better than heaven. Over 3100 exhibitors pitch new products and software in an event that crams the Las Vegas Convention Center, the nearby Hilton and hotels on the strip. For large companies like Microsoft, Intel, Samsung and Panasonic, rather than booths they have palaces. Huge kitchen displays, rows of new computers and cell phones, theaters and amphitheaters make the nicest Apple Store (whose parent company does not attend) look like a thrift shop. This week 140,000 people flock to Las Vegas and contribute US$150 million into the local economy.