Best Places to Get Free Books – The Ultimate Guide 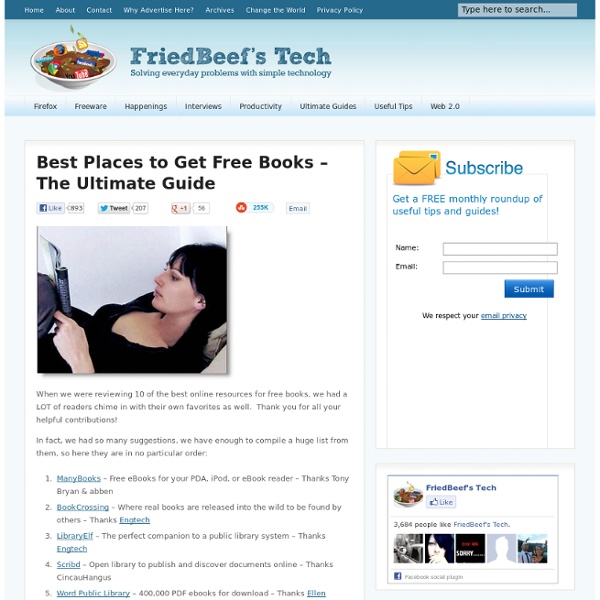 When we were reviewing 10 of the best online resources for free books, we had a LOT of readers chime in with their own favorites as well. Thank you for all your helpful contributions! In fact, we had so many suggestions, we have enough to compile a huge list from them, so here they are in no particular order: ManyBooks – Free eBooks for your PDA, iPod, or eBook reader – Thanks Tony Bryan & abben BookCrossing – Where real books are released into the wild to be found by others – Thanks EngtechLibraryElf – The perfect companion to a public library system – Thanks EngtechScribd – Open library to publish and discover documents online – Thanks CincauHangus Word Public Library – 400,000 PDF ebooks for download – Thanks EllenFree Tech Books – Free computer science and engineering books (+ lecture notes) – Thanks EllenBookins – Swap real books with other readers – Thanks Jimbob WellToldTales – Free short story podcasts (like audiobooks, but shorter) – Thanks Kevin C. Google+

160 Free Textbooks: A Meta Collection Free textbooks (aka open textbooks) written by knowledgable scholars are a relatively new phenomenon. Below, find a meta list of 200 Free Textbooks, and check back often for new additions. Also see our online collection, 1,700 Free Online Courses from Top Universities. My Rocketbook Highly stylized and interactive – created for your iPhone, iPad, iPod touch or DVD player – Rocketbook Study Guides feature chapter summaries, in-depth analyses and pop quizzes that break down and explain classic works of literature. They are the ideal companions for the modern student's reading experience. "These are study guides like you've never seen before. Designed especially for teen audiences, graphics, animation, live-action footage, and music make the presentation very engaging." — cathyduffyreviews.com "I have always been extremely impressed with the RocketBook Series.

25 Free Sites for Reading Books Online Do you love to read but hate to walk or drive or rise from a prone position on your hammock? Well, if you have Internet access, you don’t have to! (Granted, if you only have a desktop computer, you’ll probably have to sit up.) With these 25 great sites, you have access to tens of thousands of books, plays, essays, poems and other written works in electronic form anytime for free! With the scanned documents, you can even enjoy the illustrations and the visual look and feel of the often historic works. The texts available are primarily older ones whose copyright protection has expired, and thus they’re now in the public domain, so don’t expect to find the latest Twilight book or anything like that.

Project Gutenberg - free ebooks On August 26 2020, the Project Gutenberg website underwent some major changes. These changes had been previewed since early 2020, and visitors to the old site were invited to try the new site, including giving input via a brief survey. The old site is no longer available. If you found yourself on this page unexpectedly, it is because an old page was redirected here.

Shakespeare's Plays Shakespeare's Plays Before the publication of the First Folio in 1623, nineteen of the thirty-seven plays in Shakespeare's canon had appeared in quarto format. With the exception of Othello (1622), all of the quartos were published prior to the date of Shakespeare's retirement from the theatre in about 1611. It is unlikely that Shakespeare was involved directly with the printing of any of his plays, although it should be noted that two of his poems, Venus and Adonis and The Rape of Lucrece were almost certainly printed under his direct supervision. Here you will find the complete text of Shakespeare's plays, based primarily on the First Folio, and a variety of helpful resources, including extensive explanatory notes, character analysis, source information, and articles and book excerpts on a wide range of topics unique to each drama.

Banned Books Online presents Welcome to this special exhibit of books that have been the objects of censorship or censorship attempts. The books featured here, ranging from Ulysses to Little Red Riding Hood, have been selected from the indexes of The Online Books Page. (See that page for more than 2 million more online books!) Free Books : Download & Streaming : Ebook and Texts Archive : Internet Archive Additional collections of scanned books, articles, and other texts (usually organized by topic) are presented here. United States Patent and Trademark Office documents contributed by Think Computer Foundation. Topic: U.S Patent The American Libraries collection includes material contributed from across the United States. Institutions range from the Library of Congress to many local public libraries. As a whole, this collection of material brings holdings that cover many facets of American life and scholarship into the public domain.

Einstein for Everyone Einstein for Everyone Nullarbor Press 2007revisions 2008, 2010, 2011, 2012, 2013 Copyright 2007, 2008, 2010, 2011, 2012, 2013 John D. Norton Published by Nullarbor Press, 500 Fifth Avenue, Pittsburgh, Pennsylvania 15260 with offices in Liberty Ave., Pittsburgh, Pennsylvania, 15222 All Rights Reserved Arabian Nights - Index This is an extract of one of the earliest translations of the "Arabian Nights" into English, made by Sir Richard Francis Burton. I got the "flat" ASCII text from a gopher server that has been unavailable for some years now. I have no idea who scanned/typed the text. This extract is not nearly complete. The "arabian nighs" form a huge text corpus, and in translating them, Burton performed a gargantuan work. At ca. 350 pages per volume and 16 volumes, the full text corpus will contain some 11MByte.