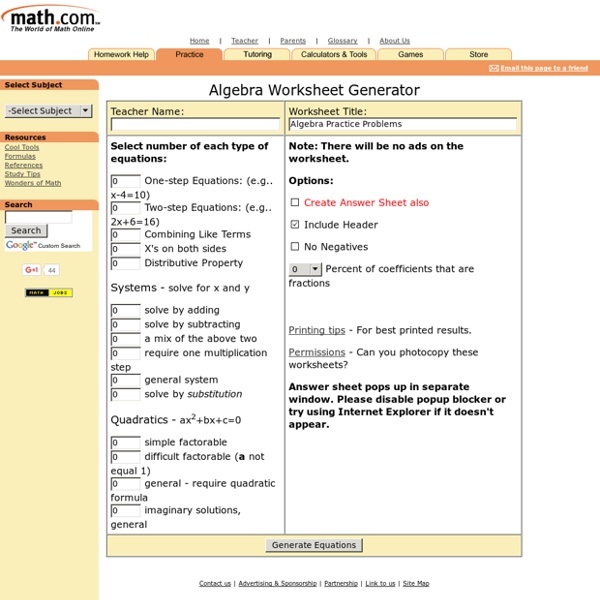 Select number of each type of equations: One-step Equations: (e.g.. x-4=10) Two-step Equations: (e.g.. 2x+6=16) Combining Like Terms X's on both sides Distributive Property Systems - solve for x and y solve by adding solve by subtracting a mix of the above two require one multiplication step general system solve by substitution Quadratics - ax2+bx+c=0 simple factorable difficult factorable (a not equal 1) general - require quadratic formula imaginary solutions, general Note: There will be no ads on the worksheet. Options: Create Answer Sheet also Include Header No Negatives Percent of coefficients that are fractions Printing tips - For best printed results. Permissions - Can you photocopy these worksheets? Answer sheet pops up in separate window.

Algebra UK | Education | Maths exams &#039;have become easier School mathematics exams in England have become easier, shallower and less demanding, according to a think tank. Analysis of public maths exam papers taken by 16-year-olds between 1951 and 2006 shows standards have declined markedly, the report for Reform argues. This means more pupils have left school ill-prepared for the workplace and a generation of mathematicians has been lost to the nation's economy, it adds. The government insists maths exam standards are very closely monitored. The Reform report assesses how maths exam papers changed over time in terms of their content, difficulty, style and pass standard. It concludes that between 1951, when O-levels were introduced, and 1970, standards remained constant with a strong focus on algebra, arithmetic and geometry. A simplification trend began in the 1980s with an attempt to show mathematics in context, but the syllabus remained comparable to that of earlier years. 'Geek to chic' Economy

How Are Linear Equations Used in Everyday Life? Linear equations use one or more variables where one variable is dependent on the other. Almost any situation where there is an unknown quantity can be represented by a linear equation, like figuring out income over time, calculating mileage rates, or predicting profit. Many people use linear equations every day, even if they do the calculations in their head without drawing a line graph. Variable Costs Imagine that you are taking a taxi while on vacation. Rates Linear equations can be a useful tool for comparing rates of pay. Budgeting A party planner has a limited budget for an upcoming event. Making Predictions One of the most helpful ways to apply linear equations in everyday life is to make predictions about what will happen in the future. With hands-on experience in the traditional classroom, the online setting, and the world of curriculum development, Jessica Smith is a veteran educator who is passionate about learning.

Secret Worlds: The Universe Within - Interactive Java Tutorial Secret Worlds: The Universe Within View the Milky Way at 10 million light years from the Earth. Then move through space towards the Earth in successive orders of magnitude until you reach a tall oak tree just outside the buildings of the National High Magnetic Field Laboratory in Tallahassee, Florida. Once the tutorial has completely downloaded, a set of the arrows will appear that allow the user to increase or decrease the view magnitude in Manual mode. Notice how each picture is actually an image of something that is 10 times bigger or smaller than the one preceding or following it. Earth = 12.76 x 10+6 = 12,760,000 meters wide (12.76 million meters) Plant Cell = 12.76 x 10-6 = 0.00001276 meters wide (12.76 millionths of a meter) Scientists examine things in particular ways using a combination of very sophisticated equipment, everyday instruments, and many unlikely tools. Note: - The sequence of images in this tutorial has been optimized for maximum visual impact. Contributing Authors

www.matematikk.org Artifact Engine Artifact Engine Oct 20, 2014 By Nicolas Weidinger When thinking about the future, it is important to start somewhere. Especially if we believe that the future is something that we can actively shape and attempt to direct. Consider this future: One way to start the futures thinking process is by creating an Artifact from the Future, the above text is an example of this. Each Artifact is a snapshot of one possible object, frozen in time. You may already be familiar with some of IFTF’s Artifacts from the Future. Artifact Engine: Analog Version This activity is a great way to start a conversation about the future. It works by compiling lists of words, and using dice to recombine these words into sentences that describe possible futures. A free, Creative Commons licensed PDF of this worksheet is available for download here: Artifacts from the Future Worksheet Artifact Engine: Digital Version There is also an online version that uses the same mechanics, but the process is automated.