The National “Numeracy” Review. [This post is authored by Judy Mousley – Ed.] 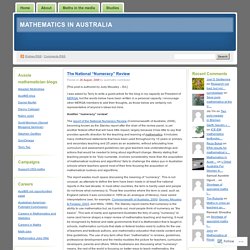 I was asked by Terry to write a guest article for the blog in my capacity as President of MERGA, but the words below have been written in a personal capacity. I encourage other MERGA members to add their thoughts, as those below are certainly not representative of anyone’s ideas but mine. Another “numeracy” review! The report of the National Numeracy Review (Commonwealth of Australia, 2008), becoming known as the Stanley report after the chair of the review panel, is yet another federal effort that will have little impact, largely because it has little to say that provides specific direction for the teaching and learning of mathematics.

It includes many motherhood statements that have been used throughout my 15 years or primary and secondary teaching and 25 years as an academic, without articulating how curriculum and assessment guidelines can give teachers new understandings and actions that would be needed to bring about significant change. Count Me In Too. First Steps Mathematics - Steps Resources - The Department of Education. Product search. Order, rhythm and pattern. This is Archie, our then 3 year old grandson, after spontaneously reassembling a sawn up branch and being asked to pose with it for his delighted grandfather. 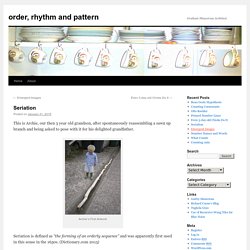 Archie’s First Artwork Seriation is defined as “the forming of an orderly sequence” and was apparently first used in this sense in the 1650s. (Dictionary.com 2015) The peak usage of the term appears to have been in 1977. Early Childhood Interaction Lab. Recent Publications (Please note that Dr. 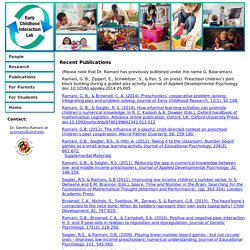 Ramani has previously published under the name G. Ict games.

Northern Ireland Curriculum » Homepage. Introduction to Numicon. Numicon - Oxford University Press. Numicon is a multi-sensory approach to mathematics using structured apparatus designed to give students the understanding of number ideas and number relationships that are essential for success in maths.

Numicon use a series of structured patterns - Numicon shapes - to represent numbers, as part of a progressive teaching program. In addition to the detailed teaching guides, Numicon offers a Professional Development program designed to give educators the opportunity to reflect on their pedagogy and provides direct experiences of Numicon activities and insight into the underpinning theory. Numicon: Box of 80 Numicon Shapes : 9780198487272. Rational Mathematics Education: Search results for mathematics. Derek Stolp on “A Mathematician’s Lament” – The Reflective Educator. Math Forum Discussions. Mr. 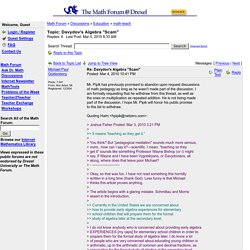 Pipik has previously promised to abandon upon request discussions of math pedagogy as long as he wasn't made part of the discussion. I am formally requesting that he withdraw from this thread, as well as the ones on multiplication as repeated addition. He is not being made part of the discussion. I hope Mr. Math Forum Discussions. Rational Mathematics Education: Khan, you bloodsucker! KHAAAAAN! (More musings on the Khan Academy)

Why do many well-meaning (and some not-so-well-meaning) people think that the Khan Academy is THE panacea for various woes, perceived and real, in US mathematics education? 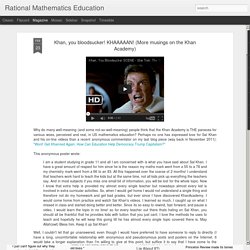 Perhaps no one has expressed love for Sal Khan and his on-line videos than a recent anonymous commentator on my last blog piece (way back in November 2011): "Wont' Get Khanned Again: How Can Education Help Democracy Trump Capitalism? " This anonymous poster wrote: I am a student studying in grade 11 and all I am concerned with is what you have said about Sal Khan. Factfish TIMSS, science, mean performance, grade 8, male for Russia.

Derek Stolp on “A Mathematician’s Lament” – The Reflective Educator. Rational Mathematics Education: Where Are The Explanations? Davydov, Vygotsky, Measurement, and Scientific Knowledge. "found in their studies of the development of primates, 'primitive' peoples, and children, that cognitive development occurs when one is confronted with a problem for which previous methods of solution are inadequate [Comment: not unlike how much mathematics has developed, by the way]. 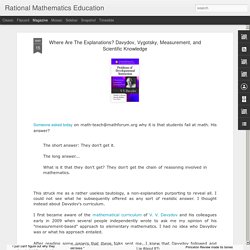 Hence, Davydov's curriculum is a series of very deliberately sequenced problems that require children to go beyond prior methods, or challenge them to look at prior methods in altogether new ways, in order to attain a complete theoretical understanding of concepts. More importantly, their consistent engagement with this process develops the ability to analyze problem situations at a theoretical rather than an empirical level, and thus to form THEORETICAL rather than EMPIRICAL generalizations, which is the distinguishing feature of Davydov's work. " Russian Math in Hawai‘i. Russia is renowned for linking math concepts to real-world situations, creating a context of understanding with an emphasis on critical thinking and problem solving. 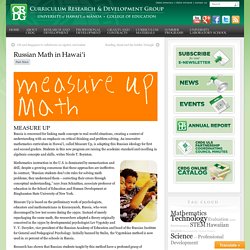 An innovative mathematics curriculum in Hawai‘i, called Measure Up, is adapting this Russian ideology for first and second graders. Students in this new program are raising the academic standard and excelling in algebraic concepts and skills, writes Nicole T. Boynton. Mathematics instruction in the U.S. is dominated by memorization and drill, despite a growing consensus that these approaches are ineffective. In contrast, “Russian students don’t cite rules for solving math problems; they understand them – correcting their errors through conceptual understanding,” says Jean Schmittau, associate professor of education in the School of Education and Human Development at Binghamton State University of New York.

There is no question that math scores in the U.S. has lagged behind other developed nations. Russian Math in Hawai‘i. University of Missouri. Research Areas Using measurement to development mathematical concepts for grades 1–5, and prekindergarten number concepts.Exploring strategies to support struggling learners in mathematics, including tiers 2 and 3 in the Response to Intervention process.Developing assessments that support the progress monitoring system for learners in algebra. 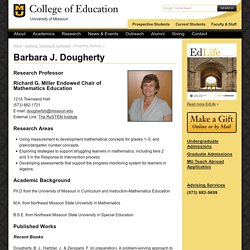