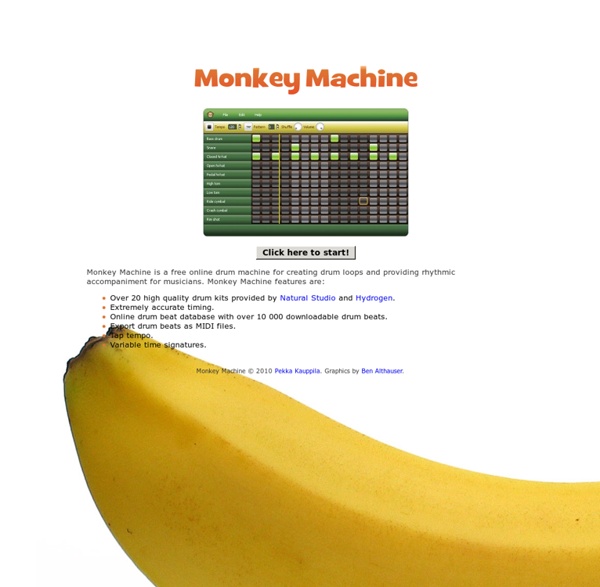 beatlab - make music together Sound Chopper 2 V2.0 Sound chopper 2 is a stand alone application built in Max/MSP. Sound Chopper 2 features a granulator, stretcher, pitch shifter, slicer and tremolo, panner, bit crusher, 8 different delays (mono and stereo) and 8 filters. Those parameters can also be automated over time so you won’t need to touch 20 knobs all at once. All the parameters are midi compatible, also you can use your webcam as an xy pad, just grab a blue object and the software will track the position, also if you own a motion leap controller you can map the values to the position of your hand. Inside the software you’ll find a pdf (under “Option” – “Let’s get started”) that explains it in more details. Available for download How did this project use Max? built entirely on max msp 6

Ten of the best music apps for kids | Technology From hammering saucepans to bellowing Justin Bieber in the bath, many children love to make a musical racket. Inevitably, there are apps for that too. A range of developers have been finding inventive ways for children to explore creative music-making – or the world of music more generally – on tablets and smartphones. Ten of the best examples for Android and iOS are below. Toca DanceiOS (£2.49) Fresh out in March, this is the best app yet from children’s developer Toca Boca. Easy MusicAndroid / iOS (£2.99 - £3.59) Aimed at five-year-olds and up, Easy Music is an accessible introduction to music theory for children, with animated characters teaching them to recognise notes, pitch, melody and rhythm. LoopimaliOS (£2.49) Loopimal is ridiculous in all the best possible ways – the ones involving animals as musical instruments – but it’s also very clever in the way it strips down the idea of a sequencer tool to something pre-schoolers can have fun with. Crayola DJAndroid / iOS (£2.44 - £3.99)

Making music in Linux and beyond You can do a lot with free open-source software, also known as FOSS. Musicians with a yen for Linux are in luck; the array of choices for creating, editing, producing, and publishing music using nothing but FOSS software is staggering. One way to get your hands on a plethora of audio tools is to run the Ubuntu Studio distro, which comes preconfigured for real-time audio processing and includes every studio tool under the sun. Failing that, there are the ubuntustudio-audio and ubuntustudio-audio-plugins virtual packages in Ubuntu, which will install 54 and 18 specialized packages, respectively. Other alternatives include the Musix distribution and the low-end hardware distro dyne:bolic, but Ubuntu Studio has the largest toolkit in the genre and enjoys the widest support as well. Pick your favorite multimedia distro and go nuts, or just install the applications you want to try out, one RPM or DEB package at a time. You still don't know JACK Working with Ardour and Audacity

Neil Young’s online music archive is here, and it’s fucking incredible If ever there was a time to listen to Neil Young, it’s today. The musician’s entire catalog is available to stream for free on his newly launched archival website. “We developed [the archive] to provide fans and historians with unprecedented access to all of my music and my entire archive in one convenient location,” writes Young in an open letter introducing the archive. The songs are organized chronologically spanning more than 50 years. Included are all of Young’s released solo titles, as well as his records made with Buffalo Springfield, Crosby Stills Nash and Young, and Crazy Horse. Additionally, there are ten unreleased albums and a few unreleased films. Read more:— Neil Young’s Top 10 Songs— The 25 Best Neil Young Covers— The Very Best of Neil Young Most of the music is available in a high-resolution audio format via Young’s Xstream streaming platform. “Full resolution is attained with no compression, unlike any other streaming service to date,” Young explains.

Recording in Ubuntu Linux (aka Free and Open Source Digital Audio Workstation) Editors Most of these toolbar buttons should be familiar to anyone that uses multitrack and sequencing programs, but the editors deserve a little extra explanation. Editors The matrix and percussion editors are your standard sequencer style editors. Rosegarden also has a standard, western music notation editor that you can print to pdf or postscript. In the event editor you can go into finer control of MIDI data as well as add indicators, clef/key/tempo changes and a few other things I don't understand yet! Rosegarden allows you very fine control of sequencing in multiple formats, which is mainly what I use it for at the moment. EDIT: Thanks to Gunhild Anderson and the Rosegarden Mailing List I now know that you can configure your own keyboard shortcuts under Settings >> Configure Shortcuts. Tracks Tracks are displayed in Rosegarden's main window. Segments The ability to make variations like that was a pain in Fruity Loops because I needed to make a new pattern. Audio Segments Ins and Outs

hitRECord Making Music(Beats) on Linux/Ubuntu with Hydrogen I am going to review a couple of Music Making Softwares for Linux and am starting with the simplest and one of the best!HYDROGEN. Hydrogen basically is a pattern based drum programming software which in layman terms means, it allows you to make your own beats.And in case you aren't much into music, you might be wondering “what the hell will i do with this piece of software”...well here is a word from my friends who've tried this: “Its pretty fun playing with this software, n even without knowing much, you could actually MAKE SUM MUSIC!!!” About the software:(technical:from the software's website itself!) General Very user-friendly, modular, fast and intuitive graphical interface based on QT 3. This is how HYDROGEN looks Installation: To install Hydrogen issue the following command in the terminal window (Applications -> Accessories -> Terminal) sudo apt-get install hydrogen that will install the basic hydrogen with a default drum kit..if you want a few more drum kits(actually a lot more!)