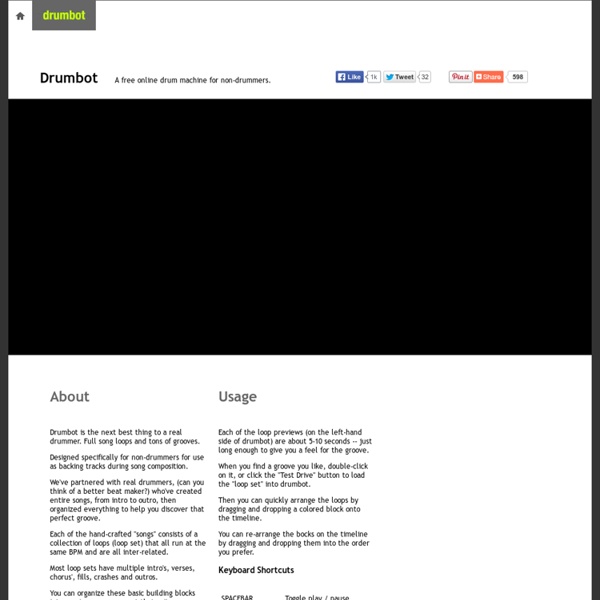 Drumbot is the next best thing to a real drummer. Full song loops and tons of grooves. Designed specifically for non-drummers for use as backing tracks during song composition. We've partnered with real drummers, (can you think of a better beat maker?) who've created entire songs, from intro to outro, then organized everything to help you discover that perfect groove. Each of the hand-crafted "songs" consists of a collection of loops (loop set) that all run at the same BPM and are all inter-related. Most loop sets have multiple intro's, verses, chorus', fills, crashes and outros. You can organize these basic building blocks into a unique arrangement that suits your needs. Each of the loop previews (on the left-hand side of drumbot) are about 5-10 seconds -- just long enough to give you a feel for the groove. When you find a groove you like, double-click on it, or click the "Test Drive" button to load the "loop set" into drumbot. Keyboard Shortcuts

KeyFinder KeyFinder is an open source key detection tool, for DJs interested in harmonic and tonal mixing. Designed primarily for electronic and dance music, it is highly configurable and can be applied to many genres. It supports a huge range of codecs thanks to LibAV, and writes to metadata tags using TagLib. online beat machine Includes over 400 unique drum samples, spanning electro to real drum kits. Create beats, compose drum tracks and then save the results to WAV sound files for use in other projects or software. Enjoy! Two Play Buttons? Liquid Notes - Advanced Harmony Analysis, Chord Progression Management and Live Performance The songwriting assistant that offers a controllable range of alternatives for chords and harmonies in a MIDI arrangement. Liquid Notes is a revolutionary standalone instrument and plug-in that combines a world-class composer, songwriting partner, arranger, electronic artist, producer, and live DJ, and a set of meticulously designed controls and functions—all in one package! Beyond breathtaking musical skill and analytical capabilities, Liquid Notes allows its users unlimited creativity and inspiration through its groundbreaking functionality.

Auditorium Play the first game we ever created together. Auditorium hit the scene in 2009. Since then, its sleek design, vibrant colors, and iconic soundtrack have captured the imagination of thousands of players worldwide. Now, we invite you to follow the same journey. Remember, there are no right or wrong answers, only your answer. Otomata 16 Jul 2011 Click on the grid below to add cells, click on cells to change their direction, and press play to listen to your music. Update: Click here to get Otomata for your iPhone / iPod / iPad! Official facebook page:

Otomata - Generative Musical Sequencer - Earslap 16 Jul 2011 Click on the grid below to add cells, click on cells to change their direction, and press play to listen to your music. Update: Click here to get Otomata for your iPhone / iPod / iPad! Official facebook page: JamStudio.com - Create Music Beats - The online music factory - Jam, remix, chords, loops Now Over One Million Users + 250,000 Instruments Loops and Beats The easiest way to createoriginal music online Get Started with JamStudio.com Learn how easy it is to make cool music in your browser with JamStudio.com.