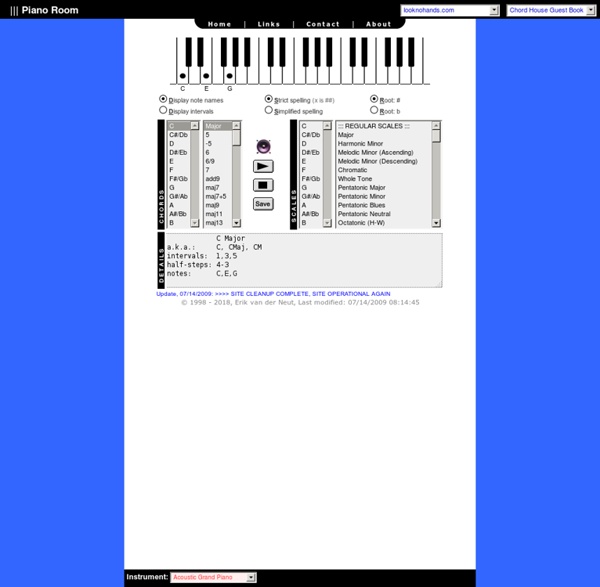 Songs for Interval Recognition I mentioned last week that I'm spending a month in Italy without a guitar. My substitute obsession has been learning the Italian language, but I've made time for some spreadsheeting wildness as well. (See Counting Tunes at Jam Sessions for a taste of my ridiculous fascination.) Songs for Intervals The spreadsheet I have for you today is a chart of songs for interval recognition. MuseScore History[edit] The MuseScore.org website was created in 2008,[2] and showed great results with a spike in the number of MuseScore downloads. By December 2008, the download rate was up to 15,000 monthly downloads. Version 0.9.5 was released in August 2009, which was stable enough for daily or production use, and support for Mac OS X was added.[3] By October 2009, MuseScore had been downloaded more than 1000 times per day.[4] By the fourth quarter of 2010, the number of MuseScore daily downloads had tripled. MuseScore 1.0 was finally released in February 2011. This milestone release focused on stability rather than new features.

Guitar/Guitar Chords Song Library The following is a list of notable easy to learn guitar songs from the 1950s to the present. It also contains links to external websites containing different informal chords to songs which represent many different authors' own interpretations of the original songs. Most of the chords on the list are relatively easy to learn, and would be a great start for novice guitar players who are interested in improving their playing abilities. How to Set Up the Ultimate Desktop Recording Studio Consider it another marvel of the digital age--or the latest evidence that the beautifully difficult, soul-taxing art of music creation has irretrievably slid into the hands of talentless idiots. Either way, with the help of a computer, a few peripherals, a variety of entry-level software and two weekends' worth of struggle, I have produced my first single. It's hardly a secret that musical production has been striding boldly into the digital age over the past three decades. Software that enables instruments to interface directly with PCs was pioneered in the 1980s, and current programs pack all the goodness of a full production studio into a laptop, with virtualized instruments, amps, effects, mixing boards and multitrack recording machines all onscreen. This has had a profound effect on the music industry--lowering the barrier to entry to the point where a small band with a computer, a microphone and a few instruments can produce studio-quality recordings.

List of musical symbols Lines[edit] Clefs[edit] Clefs define the pitch range, or tessitura, of the staff on which it is placed. A clef is usually the leftmost symbol on a staff. Additional clefs may appear in the middle of a staff to indicate a change in register for instruments with a wide range. In early music, clefs could be placed on any of several lines on a staff. 47 Sites Every Recording Musician Should Visit In a recent “Open Mic” we asked you, “Which music-related sites do you visit regularly?” This article is a summary of the great suggestions given in the comments to that article. You can make the list even longer by commenting on this article. As you’re reading this article, Audiotuts+ needs no introduction. Several commenters mentioned Audiotuts+ - thanks for the support! This is a great Flash site with many resources to help you learn music theory.

Reed Ghazala and Circuit Sound Artists in Videos, as NYC’s Bent Festival Gets Underway Circuit bending has a reputation as involving far-out, unstructured experimental noise, of real violence and distortion done to instruments. And there’s probably a place for that. But Reed Ghazala, circuit bending’s spiritual father and electronic practitioner, takes a more organic, evolutionary approach. Reed recently told me about his favorite application of his iPad, apart from exploring new experimental soundscapes with tools like the brilliant granular app Curtis. He brings it with him into the forest, using GPS for location, and tracking plants and animals, identifying the sounds of bird and beasts. In our electronic ecosystem, fowl and beast are finding their own electro-diversity.

Top 50 Youtube Guitar Channels The Top 50 Youtube Guitar Channels covers lessons, magazines, manufacturers, guitar stores, reviews, guitarists, and pretty much everything guitar centric. All of the channels below had reached at least 2 million total views by March of 2012. Our focus was on channels producing high quality guitar videos at regular intervals. 1. GuitarJamz.com #1 (martyzsongs) 155,460,210 views – guitar tabs 2. NextLevelGuitar.com (rockongoodpeople) 99,932,874 views – guitar lessons 3. Visual Culture Jobs on Rand Here’s a video we stumbled upon over at CR Blog that is worth a look on Steve Jobs relationship with design icon Paul Rand on the development/creation of his NEXT identity. From CR Blog: The Next was to be cube-shaped so Rand suggested the logo be so too. Jobs agreed and asked to see some options. Big mistake. Rand didn’t do options.

Coltrane changes Influences[edit] David Demsey,[2] saxophonist and Coordinator of Jazz Studies at William Paterson University, cites a number of influences leading toward's Coltrane's development of these changes. After Coltrane's death it was proposed that his "preoccupation with... chromatic third-relations" was inspired by religion or spirituality, with three equal key areas having numerological significance representing a "'magic triangle,'" or, "the trinity, God, or unity

Akai MPK49 Pad Modification A few years ago I did a light review of the Akai MPK49 MIDI keyboard controller. Subsequently I bought one and I've been happily using it since. However one thing consistently bugged me (and everyone else) about the design - the drum "pads" are terrible. You have to hit them quite hard to even register a hit, let alone a loud one.