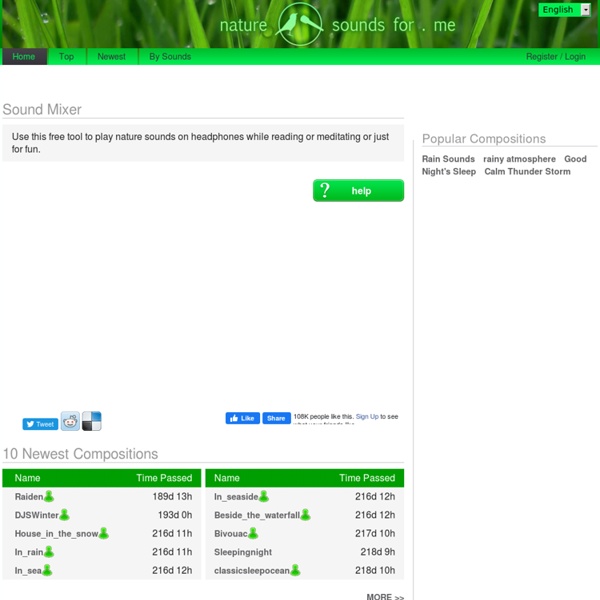 Use this free tool to play nature sounds on headphones while reading or meditating or just for fun. How to use Sound Mixer 1. Choose a sound In order for nature sounds to start playing choose a sound from drop-down box for one channel and drag the volume slider up. 2.

Auditorium Play the first game we ever created together. Auditorium hit the scene in 2009. Since then, its sleek design, vibrant colors, and iconic soundtrack have captured the imagination of thousands of players worldwide. Logical Fallacies and How to Spot Them Logical Fallacies and How to Spot Them In the Evolution vs. Creationism debate, it is important to be able to spot all the logical fallacies that Creationists tend to throw around. This essay covers many bare essentials of logical thinking, as well as ways to critically evaluate an argument. The logical fallacies listed here are the ones most often used by Creationists, although Creationists have, to date, used almost every single logical fallacy in existence to "prove" their case. Each fallacy will have its own little paragraph, describing it, why it is fallacious and how to counter it.

Create Something. Donate Login Remember Me Create An Account Forgot Password ♫ Tony-b Machine ♫ In this first tutorial, we'll see the notes that sound well together between the melody and bass. This are just some indications and not some rules : it is possible that the music sounds in another way. Before beginning, I mention that when I talk about of the melody, it is the keyboard of the top with the treble clef : and when I talk about the bass, it is the keyboard of the bottom with the bass clef :

marble magnets I finally gave in and made marble magnets. Not surprisingly they are quite fun, smooshing the glue out to make a perfect little magnified image is very satisfying. Here, in order of appearance, are the places I referenced: paper candy instructions with pictures (this is the first place I saw this project) dogmestic with instructions and pictures photogeek pictures ugly green chair cute ladybug magnets – pictures with packaging threads at Glitter:onetwothree Angry Birds, Meet Hamstrong: A Superhero Fighting FOR Animals The Wasted Gift Of Reason We are born with the gift of reason. However, society teaches us to be disconnected from nature. We are surrounded by advertisements which embrace death and destruction yet shun love and compassion.

First notes for 639-year composition The first notes in the longest and slowest piece of music in history, designed to go on for 639 years, are being played on a German church organ on Wednesday. The three notes, which will last for a year-and-a-half, are just the start of the piece, called As Slow As Possible. Composed by late avant-garde composer John Cage, who died in 1992, the performance has already been going for 17 months - although all that has been heard so far is the sound of the organ's bellows being inflated. The music will be played in Halberstadt, a small town renowned for its ancient organs in central Germany. It was originally a 20-minute piece for piano, but a group of musicians and philosophers decided to take the title literally and work out how long the longest possible piece of music could last.

Trial version - "P&P World Map" You can easily draw line, write text, and fill the nation. : Undo. : Color. online beat machine Includes over 400 unique drum samples, spanning electro to real drum kits. Create beats, compose drum tracks and then save the results to WAV sound files for use in other projects or software. Enjoy! Two Play Buttons? The top play button is for the beat pattern you're working on. The pattern will loop.