A Law Professor Explains Why You Should Never Talk to Police. Police question three people detained in Santa Ana, California. 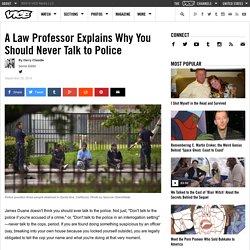 A Brief History of the "War on Cops": The False Allegation That Enables Police Violence. Police loom in the background as activists from BYP 100 and the #LetUsBreathe collective form a blockade line at Chicago's Homan Square facility, a site of documented torture of civilians by the police, on July 20, 2016. 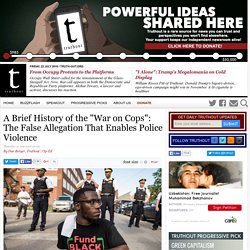 (Photo: Sarah-Ji) The following article could only be published thanks to support from our readers. FBI’s warning of white supremacists infiltrating law enforcement nearly forgotten. "A Tale of Two Hoodies" (by Michael D'Antuono artandresponse.com) Because of intensifying civil strife over the recent killings of unarmed black men and boys, many Americans are wondering, “What’s wrong with our police?” 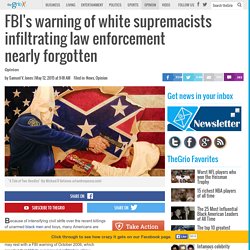 Remarkably, one of the most compelling but unexplored explanations may rest with a FBI warning of October 2006, which reported that “White supremacist infiltration of law enforcement” represented a significant national threat. Several key events preceded the report. A federal court found that members of a Los Angeles sheriffs department formed a Neo Nazi gang and habitually terrorized the black community. Matthew Harwood, Welcome to Cop Land. Sometime in late November, after the Paris terror attacks but before the one in San Bernardino, I was walking to New York’s Grand Central Station to catch the subway home. 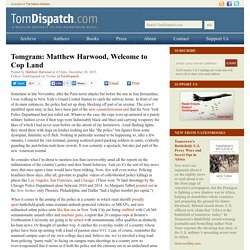 In front of one of its main entrances, the police had set up shop, blocking off part of an avenue. The crew I stumbled upon may, in fact, have been part of the new counterterrorism unit that the New York Police Department had just rolled out. Whatever the case, the cops were up-armored in a purely military fashion (even if their togs were fashionably black and blue) and carrying weaponry the likes of which I had never seen before on the streets of my hometown.

Occupy Arrests (occupyarrests) The Weirdest Things Occupy Protesters Get Arrested For - National. Judge's Ruling on Occupy Prosecutions Threatens DA's Reliance on "Violations" Thanks to a potentially far-reaching ruling by Multnomah County Judge Cheryl Albrecht, a whole mess of Occupy Portland-related misdemeanor cases that had been busted down to time- and cash-saving citations, or "violations," may now have to be prosecuted as vigorously as any other criminal case. 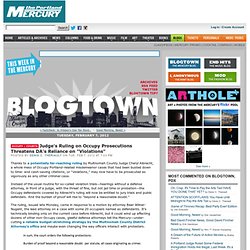 Instead of the usual routine for so-called violation trials—hearings without a defense attorney, in front of a judge, with the threat of fine, but not jail time or probation—the Occupy defendants covered by Albrecht's ruling will now be entitled to jury trials and public defenders. And the burden of proof will rise to "beyond a reasonable doubt. " The ruling, issued late Monday, came in response to a motion by attorney Bear Wilner-Nugent, the lead attorney on a case with some 20 occupiers named as defendants. "They're going to have to give our clients court-appointed lawyers," Wilner-Nugent says, "or they're going to have to dismiss the cases. " "Why is this important? " Major Event Management : Best Field Parctices. 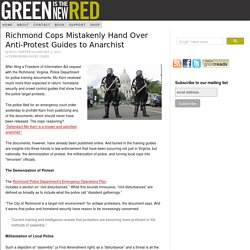 The police filed for an emergency court order yesterday to prohibit Karn from publicizing any of the documents, which should never have been released. The cops’ reasoning? “Defendant Mo Karn is a known and admitted anarchist.” Paramilitary Policing From Seattle to Occupy Wall Street. As Seattle police chief in 1999, my disastrous response to the WTO protests should have been a cautionary tale. 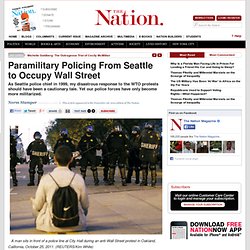 Yet our police forces have only become more militarized. A man sits in front of a police line at City Hall during an anti-Wall Street protest in Oakland, California, October 25, 2011. (REUTERS/Kim White) They came from all over, tens of thousands of demonstrators from around the world, protesting the economic and moral pitfalls of globalization. Our mission as members of the Seattle Police Department? To safeguard people and property—in that order. About the Author Norm Stamper Norm Stamper was chief of the Seattle Police Department during the WTO protests in 1999. Then came day two. “We have to clear the intersection,” said the field commander. Why? Town Square: Safe and Just Policing. Did Occupy Actually Make Police Departments More Accountable?

Occupy Wall Street activists like Cecily McMillan are still fighting the state, only this time they’re waging their battles in the courts. 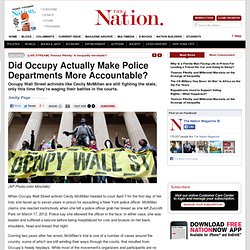 (AP Photo/John Minchillo) When Occupy Wall Street activist Cecily McMillan headed to court April 7 for the first day of her trial, she faced up to seven years in prison for assaulting a New York police officer. McMillan claims she reacted instinctively when she felt a police officer grab her breast as she left Zuccotti Park on March 17, 2012. Defying Trends, Killings of Police Officers Are on the Rise. Jeff Gentner/Associated Press. S Report on Police Militarization Finds Weapons and Tactics of War Used Disproportionately Against People of Color. 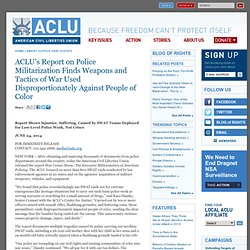 The ACLU focused on more than 800 SWAT raids conducted by law enforcement agencies in 20 states and on the agencies’ acquisition of military weaponry, vehicles, and equipment. "We found that police overwhelmingly use SWAT raids not for extreme emergencies like hostage situations but to carry out such basic police work as serving warrants or searching for a small amount of drugs," said Kara Dansky, Senior Counsel with the ACLU’s Center for Justice. Police often provoke protest violence, UC researchers find - SFGate. Aggressive actions anger activists, UC study finds Kurtis Alexander. 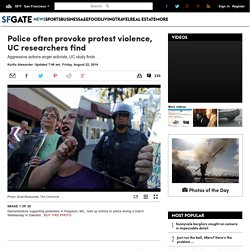 Ferguson Action Breaking: Ferguson Activists Meet with President Obama to Demand an End to Police Brutality Nationwide. December 1, 2014UpdatesComments Off It has been one week since a St. Louis County grand jury failed to indict Officer Darren Wilson for shooting Michal Brown, an unarmed teenager, six times in the head, chest and arms.