Why technology is key to Africa's future. Feature Article of Thursday, 5 February 2015 Columnist: Kende-Robb, Caroline When talk turns to technology trends at this year's World Economic Forum Annual Meeting in Davos, it should also turn to Africa – because that's where some of the world's cutting-edge innovation is happening right now. 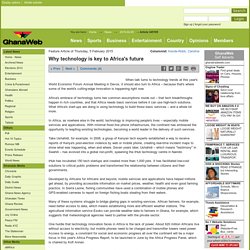 Africa’s Tech Edge - Dayo Olopade. How the continent's many obstacles, from widespread poverty to failed states, allowed African entrepreneurs to beat the West at reinventing money for the mobile age It’s a painfully First World problem: Splitting dinner with friends, we do the dance of the seven credit cards. 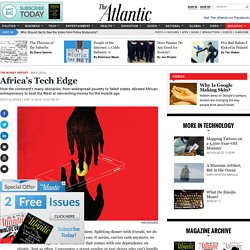 No one, it seems, carries cash anymore, so we blunder through the inconvenience that comes with our dependence on plastic. Just as often, I encounter a street vendor or taxi driver who can’t handle my proffered card and am left shaking out my pockets and purse. When I returned to the United States after living in Nairobi on and off for two years, these antiquated payment ordeals were especially frustrating.

Watch out M-Pesa, Equity Bank wants to transform mobile money in Kenya. Kenya is a regional leader in access and use of financial services, with 77% of the population living within 5km of a commercial bank or mobile money agent, according to a recent report published by Kenya Financial Sector Deepening. 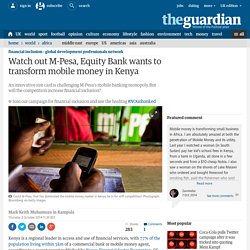 Of the total number of financial access points, “mobile money agents represent 75%”, a statistic partly explained by the success of M-Pesa. The pioneering mobile-based money transfer service, launched in Kenya in 2007 by telecomms company Safaricom, has become internationally renowned. Today 15 million subscribers use the service, transacting daily amounts estimated to be close to 60% of Kenya’s GDP. But competition is coming. In April, the Communications Commission of Kenya licensed three new Mobile Virtual Network Operators (MVNOs). The move clearly has business implications for Kenya’s mobile money market. There is clear evidence that Equity Bank is already playing an important role in deepening access to financial services in Kenya. Africa's mobile economic revolution. Earlier this month, on a short bus ride through the centre of Kampala, I decided to carry out an informal survey. 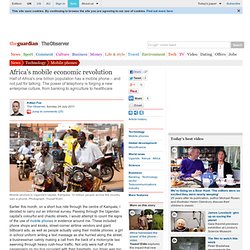 Passing through the Ugandan capital's colourful and chaotic streets, I would attempt to count the signs of the use of mobile phones in evidence around me. These included phone shops and kiosks, street-corner airtime vendors and giant billboard ads, as well as people actually using their mobile phones: a girl in school uniform writing a text message as she hurried along the street, a businessman calmly making a call from the back of a motorcycle taxi swerving through heavy rush-hour traffic. Not only were half of the passengers on my bus occupied with their handsets, our driver was too, thumbing at his keypad as he ferried us to our final destination.

After five minutes, I lost count and retired with a sore neck. Ten innovations changing Africa – Portland. Cellphones ignite a 'reading revolution' in poor countries. Toby Shapshak: You don't need an app for that. Fix That Fits: What is the Right Evaluation for Social Innovation? Does microcredit reduce poverty? 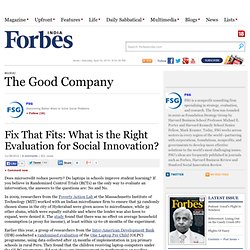 Do laptops in schools improve student learning? If you believe in Randomized Control Trials (RCTs) as the only way to evaluate an intervention, the answers to the questions are: No and No. In 2009, researchers from the Poverty Action Lab at the Massachusetts Institute of Technology (MIT) worked with an Indian microfinance firm to ensure that 52 randomly chosen slums in the city of Hyderabad were given access to microfinance, while 52 other slums, which were equally suitable and where the lender was also keen to expand, were denied it.

The study found that there was no effect on average household consumption (a proxy for income), at least within 12-to-18 months of the experiment. Mobile phones transform Malawi farmers. By BiztechAfrica - Aug. 14, 2013, 7:21 p.m. 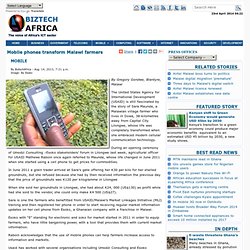 Image: By Esoko By Gregory Gondwe, Blantyre, Malawi The United States Agency for International Development (USAID) is still fascinated by the story of Sara Maunda, a Malawian village farmer who lives in Dowa, 38-kilometres away from Capital City Lilongwe, whose life was completely transformed when she embraced modern cellular communication technology. During an opening ceremony of Umodzi Consulting –Esoko stakeholders’ forum in Lilongwe last week, agricultural officer for USAID Mathews Raboin once again referred to Maunda, whose life changed in June 2011 when she started using a cell phone to get prices for commodities.

In June 2011 a grain trader arrived at Sara’s gate offering her K30 per kilo for her shelled groundnuts, but she refused because she had by then received information the previous day that the price of groundnuts was K120 per kilogramme in Lilongwe Raboin described Esoko as a tool that costs relatively little. Tags. Digital Provide: From Good to Gold. DIGITAL PROVIDE. 5 major trends anyone in the African tech space should be aware of. The African tech scene is changing. 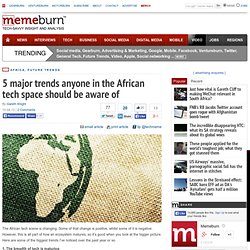 Some of that change is positive, whilst some of it is negative. However, this is all part of how an ecosystem matures, so it’s good when you look at the bigger picture. Here are some of the biggest trends I’ve noticed over the past year or so.