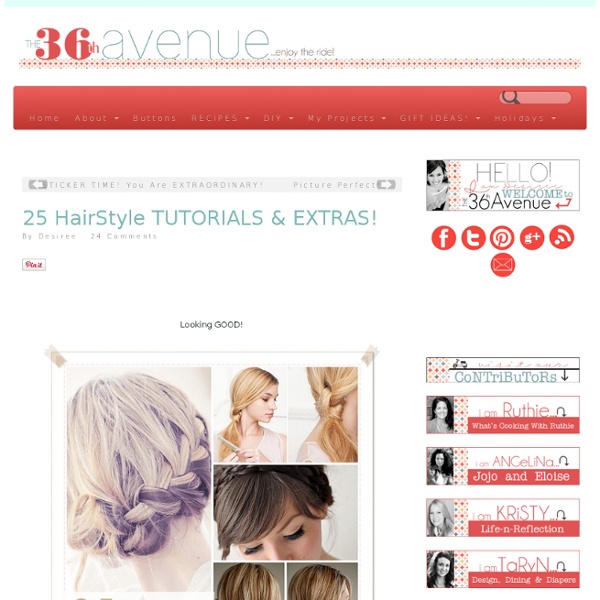 Looking GOOD! With the holidays also come a bunch of parties! Some of them are just family gatherings, some other ones are work related and some are hosted by great friends. Whatever the occasion is I think we ladies deserve to look good, regardless of our age, size or taste. So I put together for today’s Sunday Best 25 tutorials of hair-styles and some few other EXTRAS for inspiration! The Messy Side Updo. What I like about this hair is that you can wear it casually or dress it up with some cute hair pieces for a more formal look. I love it! tutorial The Gibson Tuck Elegant, simple, chic… perfection! Her beautiful hair makes me want to color mine… I love the red! tutorial EXTRA: Greenlicious! I thought it would be fun to throw in this list some eye makeup tutorials also. This color palette is perfect for the Holidays! It would look great with brown eyes also… How do I know? I have done it! tutorial The Side Chignon You La La! So pretty and romantic! tutorial Side Knot Two minutes and you look fabulous!

KITCHEN BEAUTICIAN: HOMEMADE LIP STAIN photos + post by amy nadine, graphic design by eunice chun For those of you concerned about what chemicals we’re putting in and on our bodies, you can’t get more natural than this homemade berry lip stain! We love it because it adds the perfect “just-bitten” hint of color to fake that Snow White luscious lip! Here’s how to do it yourself:

Ten Ways to Dress Up a Ponytail Sometimes I'm just not in the mood to spend a lot of time on my hair. But at the same time, I don't want to look like a homeless hairdresser when I go to work, so I try to make my ponytails as fancy as possible. Here are ten easy ways I like to dress up my ponytail: 1. Wrap it with a strand of hair -Put your hair in a ponytail like you normally would. 8 Ways to Defeat Persistent Unwanted Thoughts Repressing thoughts doesn’t work so here are 8 ways to get rid of negative thoughts. It’s one of the irritations of having a mind that sometimes it’s hard to get rid of negative thoughts. It could be a mistake at work, money worries or perhaps a nameless fear. Whatever the anxiety, fear or worry, it can prove very difficult to control.

hair Recently I realized that we’ve never really had a specific chat about hair serums. There are so many different formulas from silicone-based, to alcohol free, to natural, to curl enhancing, etc… All of them promise to deliver mega shine on the driest, dullest hair. But there’s more to it than that. I thought it would be fun to break down 8 of my favorites (each being my jam for a different reason), tell you what I’ve experienced with each and tell you who I would recommend them for. DIY Rosemary Foot Soak & Olive Oil Scrub So I got this crazy thought, that it might be nicer for me (and my fellow gym-goers) if my feet got a little extra attention. You know, every once in a while. I find it really challenging doing anything to my feet during winter, since they're tightly shoved into boots all the time anyway. I should, though, and it would be so easy to just do while I watch some tv show I'm gonna watch anyways! So, I've noticed a few articles about using epsom salt in foot soaks, and started digging. Turns out it will soothe aches, eliminate smells and softens up rough skin.

10 Easy summer hair tutorials Who doesn’t love summer? I do, but I must admit: If it’s really hot outside I really don’t feel like standing in front of the mirror for a long time. It’s just to hot… That’s why I love these 10 easy summer hair tutorials. Cindy Joseph starts modeling career with gray hair at 48 « Modelmode At 54 Cindy Joseph is as popular as ever appearing in countless ad campaigns and even her own fitness video. This mother of 2, 50+ fashion model did not get her start in her teens like many top fashion models, rather, she started her modeling career in her late 40′s by actually being “discovered” by an agent. Yes, at 49 Cindy got discovered when a casting agent approached her about doing a ad campaign for the young, hip and trendy, D&G. What seemed like a joke to her at first became her second career and this gray haired fashion model now commands top prices for her time.

How to Get Whiter Teeth - Handmade Wedding Happy Tuesday! Question: what goes well with a white wedding dress? Whiter teeth, of course! Today we’re sharing one of the most sought after beauty secrets: how to get whiter teeth. Rainforest Lip Butter Recipe This creamy, moisturizing lip butter is made with some of the most beneficial skin care ingredients that the rainforest has to offer. Rich Cupuacu Butter, nourishing Acai and Maracuja Oils are blended with natural Beeswax and Andiroba Oil to create a soft, conditioning lip treatment. Mango Flavor Oil adds an exotic aroma to this recipe, but if you prefer an all natural balm, try using 1/2 teaspoon of your favorite Mint Essential Oil in its place. Rainforest Lip Butter Makes about 5 Ounces, enough to fill about 15 1/4 oz. Slider Tins.

Partial French Braid with Cascading Hair ~ Tutorialalso known as the "Waterfall Braid" Fashion I’m not the originator of this hair style but I’ve gotten so many requests for it, I thought I’d give it a go for you. I don’t know what it’s called either so I haven’t researched it and/or found any other tutorials for it …thus, this is my version of it, and I’ve dubbed it the Partial French Braid w/ Cascading Hair. The photos I’ve seen online show the braid a little more straight across the back of the head and mine sort of braids at an angle, similar to my side/low french braid up-do. I’m sure this is 100% easier to do on someone else’s hair than your own but it goes pretty quickly once you get the hang of it …I mean, it’s my shortest hair video tutorial to date.