Should we believe & care? yes/no

BARE NAKED ISLAM. “All we asked was that they convert to Islam. 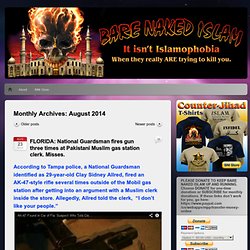 When they refused, naturally we had to kill them.” In the second half of the video, you’ll see a group of Yazidi men reciting the Shahada which converts them to Islam. Notice there are no women in this group. I guess they are now sex slaves for ISIS. A former CIA officer said Thursday he has no doubt Islamic State (ISIS) sleeper cells are already planted on U.S. soil as well as in Europe which could target U.S. embassies and other American interests. Newsmax Former CIA officer Bob Baer told the network ISIS is already on this side of the Atlantic. One ISIS fighter already has hinted as much. “The West are idiots and fools,” one fighter taunted, according to Reuters. “They think they can distinguish us these days – they are fools and more than that they don’t know we can play their game in intelligence.

About 100 Americans are being tracked by the FBI because of their travels to Syria, some to join ISIS, analysts say. One report informs us: Iran’s president believes that the Mahdi, the Muslim Messiah, is coming very soon « vineoflife.net. February 25, 2013. 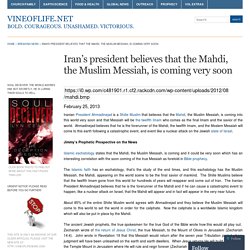 Why Is Israel looking for Imam Mahdi? During the US occupation of Iraq it was routine to torture Iraqis in prisons like Abu Ghraib whose prison guards were using tactics learnt in Israeli training camps as Robert Fisk pointed out in ‘Abu Ghraib torture trail leads to Israel’; one of the most baffling questions asked during interrogation was “Where is the man called Imam Mahdi where is he hiding?” 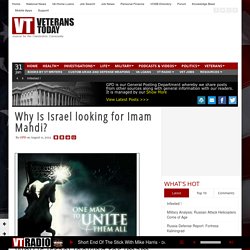 According to Mohabat News a pro –Israel Iranian Christian news agency, the fear of the hidden Imam is so credible that they posted news of how the CIA and MI6 have been going to Iraq for the past 20 years to get information about imam Mahdi; how they tortured religious scholars and innocent villagers to ask question based on where the Imam was last seen? Which city? What time and when will he be coming again and in which year? GROUND ZERO MOSQUE: THE CURSE OF LIBERALISM. Posted By Ruth King on August 11th, 2010 Ground Zero Mosque: The Curse of Liberalism August 11, 2010 – The Editor The issue of the Ground Zero Mosque has become an issue of national concern. 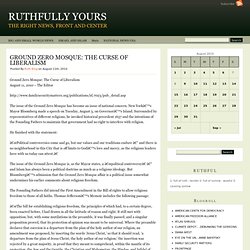 New Yorkâ€™s Mayor Bloomberg made a speech on Tuesday, August 3, on Governorâ€™s Island. Surrounded by representatives of different religions, he invoked historical precedent 1657 and the intentions of the Founding Fathers to maintain that government had no right to interfere with religion. He finished with the statement: â€œPolitical controversies come and go, but our values and our traditions endure â€“ and there is no neighborhood in this City that is off limits to Godâ€™s love and mercy, as the religious leaders here with us today can attest.â€ The issue of the Ground Zero Mosque is, as the Mayor states, a â€œpolitical controversyâ€ â€“ and Islam has always been a political doctrine as much as a religious ideology.

Bloombergâ€™s popularity among New Yorkers has sunk dramatically. U.S. Jim Willie: The Shemitah Is Sunday–The Odds of It Being Random Are Mathematic... It not only appears anecdotally sound, but a great mathematical mind has now noticed it, and has done his mathematical calculation on the odds of its natural occurence. 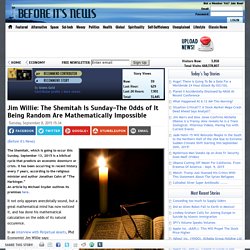 In an interview with Perpetual Assets, Phd Economist Jim Willie says: The odds of the Shemitah cycle being random is 61.8 Billion to one, according to my math.I believe the the crisis in 2015 is going to be worse than the Lehman Brothers in 2008. It will be the year the dollar faces its death, and I say it has already begun. The nations of the world will SCREAM for something to replace the dollar as the standard.The goal for this currency reset is for a total of 80% devaluation. “There’s a cycle that’s been going on and it’s remarkable. Let’s just stop there because I struggled to find what happened in 1966.

We have 7. My math says it’s 61.8 Billion to one. This whole thing got kicked off in 1973 when the Arab Oil Embargo was “suggested by Henry Kissinger.” 15 things I learnt about Islam and British values being a gay boy living opposite a mosque. Goddess Kali, Hindu God Of Death And Destruction Projected On Empire State Building. American Muslim Agenda: A New Beginning for Muslim Americans This July 4. Ramadan is an auspicious month for Muslims, and it was during this month that the Quran was revealed to Prophet Muhammad (pbuh) setting the tone for a new beginning for people of the land. 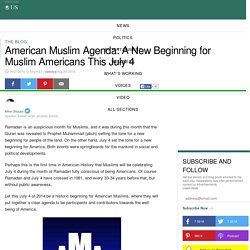 On the other hand, July 4 set the tone for a new beginning for America. Both events were springboards for the mankind in social and political developments. Perhaps this is the first time in American History that Muslims will be celebrating July 4 during the month of Ramadan fully conscious of being Americans. Of course Ramadan and July 4 have crossed in 1981, and every 33-34 years before that, but without public awareness. Let this July 4 of 2014 be a historic beginning for American Muslims, where they will put together a clear agenda to be participants and contributors towards the well being of America.

To be a Muslim is to be a peace maker, one who seeks to mitigate conflicts and nurtures goodwill for peaceful co-existence of humanity.