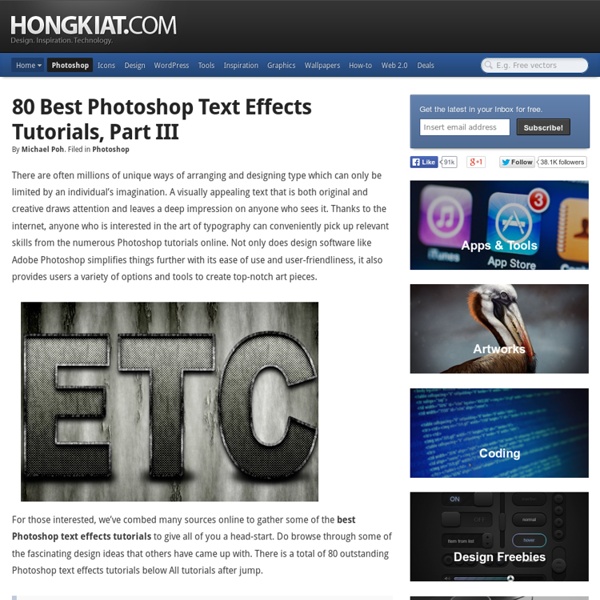 Author: Michael Poh Michael is a freelance blogger and regular contributor for Hongkiat.com. He graduated from the National University of Singapore with a double major in Psychology and Communications & New Media in 2011.He believes in the power of the written word to influence and inspire. An enthusiastic video gamer, Michael is also actively engaged in various physical activities in his spare time.

App Icon Template After more than 10k downloads of my old app icon template and countless of requests for an update, i’ve put together an app icon template that should make your icon endeavors on the iOS platform easier. Notice: My App Icon Template has been updated since i wrote this article. Most of what’s described here is still relevant for the new template, but you could also just go right ahead and read about that here. More than a year ago i posted an article called ‘iPhone app icon design: best practices” in which i supplied a very basic app template with a handful of textures for 57×57 pixel icons. Seeing that resource being downloaded more than 10k times and receiving a lot of mail from people asking me to update the resource urged me to create a new, updated template.

Simple Underwater Scene in Photoshop A few weeks ago I received an email from a reader asking me if I could write a tutorial showing an underwater scene. I have written some tutorials on this subject like the 3D type made out of water or the underwater scene for Digital Arts in 2008. However I was watching TV this weekend when I started to watch I, Robot. The opening titles of that movie is awesome and really inspired me to write this tutorial.

V-Ray Render Optimization Intro This tutorial attempts to cover the process of optimizing your V-Ray render settings to get the best possible render quality and fastest render time for a given scene. There's often a lot of confusion surrounding V-Ray's sampling methods and what 'ideal' settings are. 100+ Free and Time Saving Photoshop Actions for Photo Retouching One of the best feature in photoshop is the actions.Especially in photo retouching it is a great time saver for us.With only one click you can get amazing results.So before retouching images, it is always good to check for free photoshop actions. Today we bring you a collection of photoshop actions which are all free to download. Maldito seas Perry Action Action Source

30 Easy Photoshop Tutorials You Can Try Today Photoshop is widely used by many to make an image look very cool and bright. It assists in enhancing the photos to a large extent. Several of its features can completely transform a dull and boring picture to a very smart and perfect one. There are several easy Photoshop tutorials to make the lives of the designers much easier providing solutions for several unsolved issues. How To: Tilt-Shift effect, Fake a Miniature Scene in Photoshop Tilt-Shift is a nice novelty effect you can carry out on your life-size photos to make them look like a miniature model scene. In Photoshop you alter the field of depth by blurring some sections which mimics the look of a macro lense. You can also add to the effect by increasing the color saturation and the contrast to make the objects brighter and seem more like model toys. If you want to see examples of technique, visit the Flickr Tilt-Shift Minitures Pool. In this tutorial I will be showing you how to do this to your photos in Adobe Photoshop.

How To Slice The CleanPortfolio Psd Layout This tutorial will teach you how to slice the CleantPortfolio psd layout. This template has been published some days ago on another photoshop tutorial. Your web site design is now finished. But this result is only a simple picture you cannot update to change or to add actions. It is the reason you need now to cut it off in several graphical parts, one for the icons, one to illustrate the buttons etc…. These graphical parts will be added to your HTML web site pages using CSS proprieties, even you are going to create a web site with HTML5/CSS, CSS proprieties are going to take place of several pictures (internal shadow, shadow, gradient etc…).

Drastically Improve Your Photos in Less Than 5 Minutes - Photography Tutorial Step 1 Once we have taken the shot we have to develop it; it is very important to use the RAW mode of the camera because a capture in RAW mode will contain more information than one in JPG. Not too much to say about the developing settings in Camera Raw, the “auto” function is usually enough for me; the hard work will be done later in Photoshop. Take special attention to the recovery value if you need to restore highlight zones without details.