New ‘Bee Tax’ on Cell Phones May Drive Landline Comeback. Recent technological reports have heralded the end of an era. 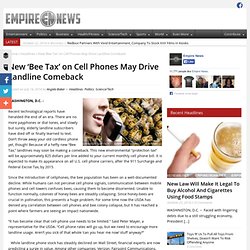 There are no more payphones or dial tones, and slowly but surely, elderly landline subscribers have died off or finally learned to text. Don’t throw away your old cordless phone yet, though! Because of a hefty new “Bee Tax,” landlines may soon be making a comeback. This new environmental “protection tax” will be approximately $25 dollars per line added to your current monthly cell phone bill. It is expected to make its appearance on all U.S. cell phone carriers, after the 911 Surcharge and Federal Excise Tax, by 2015.

Since the introduction of cellphones, the bee population has been on a well-documented decline. “It has become clear that cell-phone use needs to be limited.” While landline phone stock has steadily declined on Wall Street, financial experts are now predicting a surge in value. 4 Reasons to Keep Your Land Line. One of the most commonly suggested tips for stretching the budget is to get rid of your home phone, especially when looking to relocate. 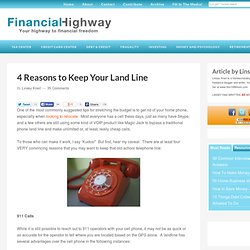 Most everyone has a cell these days, just as many have Skype, and a few others are still using some kind of VOIP product like Magic Jack to bypass a traditional phone land line and make unlimited or, at least, really cheap calls. To those who can make it work, I say “Kudos!” But first, hear my caveat. There are at least four VERY convincing reasons that you may want to keep that old-school telephone line: India’s mazdoor no 1. Deepal Trivedi Modi every morning draws up a Plan of Action for the day; the bureaucracy in Delhi must get ready to be driven hard. 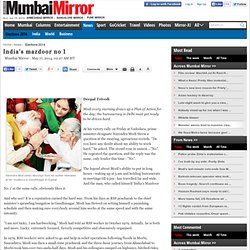 At his victory rally on Friday at Vadodara, prime minister-designate Narendra Modi threw a question at the swaying, uproarious crowds. "Do you have any doubt about my ability to work hard," he asked. The crowd rose in unison --"No". Top design school professor shuns emails & mobile, prefers postcard. In this era of super communication modes, he still prefers landline over mobile, and postcards over e-mail. 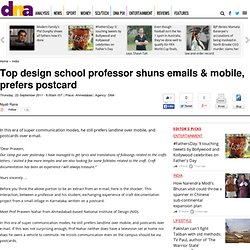 “Dear Praveen, Our camp got over yesterday. I have managed to get lyrics and translations of folksongs related to the crafts letters. I visited a few more temples and am also looking for some folktales related to the craft. Craft documentation has been an experience I will always treasure.” Yours sincerely…. "Mobilize" Trailer. Mobilize. Cellular Phone and Base Station. Why it is dangerous to have your mobile phone in operation during refueling at a gas station? 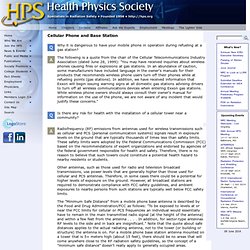 The following is a quote from the chair of the Cellular Telecommunications Industry Association (dated June 28, 1999): "You may have received inquiries about wireless phones causing fires or explosions at gas stations. In an abundance of caution, some manufacturers have included language in the owner's manuals for their products that recommends wireless phone users turn off their phones while at refueling points (gas stations). In addition, we have received information that Exxon will begin issuing warning signs at all domestic gas stations advising drivers to turn off all wireless communications devices when entering Exxon gas stations.

While wireless phone owners should always consult their owner's manual for information on the use of the phone, we are not aware of any incident that would justify these concerns. " In general this will not be a problem. It's a question of signal strength. Effects of Mobile Phone Radiation (900 MHz Radiofrequency) on Structure and Functions of Rat Brain. “Our findings indicate extensive neurodegeneration on exposure to radio waves. 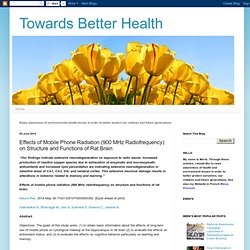 Increased production of reactive oxygen species due to exhaustion of enzymatic and non-enzymatic antioxidants and increased lipid peroxidation are indicating extensive neurodegeneration in selective areas of CA1, CA3, DG, and cerebral cortex. This extensive neuronal damage results in alterations in behavior related to memory and learning.” Effects of mobile phone radiation (900 MHz radiofrequency) on structure and functions of rat brain. Neurol Res. 2014 May 26:1743132814Y0000000392. BabySafe Project Launched to Inform Pregnant Women About Dangers of Wireless Radiation. Kevin Samson Activist Post June 9th, 2014 Reader Views: 148 Awareness continues to increase surrounding the pervasive dangers of Electromagnetic Fields (EMFs) emanating from our daily gadgets, as well as from the rise of the Smart Grid. 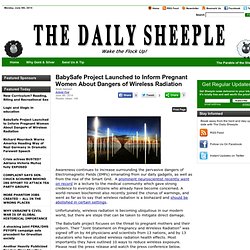 A prominent neuroscientist recently went on record in a lecture to the medical community which gave strong credence to everyday citizens who already have become concerned. A world-renown biochemist also recently joined the chorus of warnings, and went as far as to say that wireless radiation is a biohazard and should be abolished in certain settings. Electromagnetic Radiation Safety: June 2014. The following joint statement on pregnancy and wireless radiation is part of the Baby Safe Project, a new public awareness initiative designed to inform women about the links between pregnancy and wireless radiation. 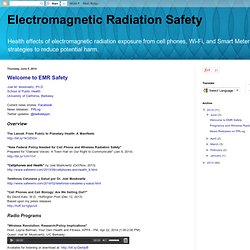 The statement was signed by 44 physicians and scientists from 13 nations, and by 13 educators who have studied wireless radiation health effects. A video of the press conference that launched the Baby Safe Project and supplementary resources are available at Dr. Hugh Taylor from the Yale University School of Medicine, Dr. Devra Davis from the Environmental Health Trust, and Dr. Maya Shetreat-Klein, a pediatric neurologist who treats autistic children, made presentations at the press conference and answered questions from journalists.Dr. Welcome To Nesa Radiation Solutions. Radiation Detector to measure radiation levels from Mobile Towers Radiation Detector DETEX 189 has been designed for quick and easy detection of radiation levels at a given spot in your premises (home or office). 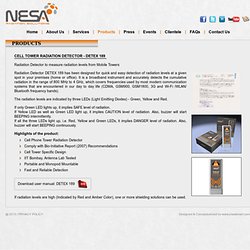 It is a broadband instrument and accurately detects the cumulative radiation in the range of 800 MHz to 4 GHz, which covers frequencies used by most modern communication systems that are encountered in our day to day life (CDMA, GSM900, GSM1800, 3G and Wi-Fi /WLAN/ Bluetooth frequency bands). The radiation levels are indicated by three LEDs (Light Emitting Diodes) - Green, Yellow and Red. If only Green LED lights up, it implies SAFE level of radiation. If Yellow LED as well as Green LED light up, it implies CAUTION level of radiation. 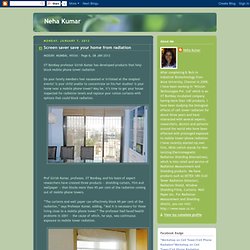 Is your child unable to concentrate on his/her studies? Is your home near a mobile phone tower? Prof. Jitendra Behari. Health threat to mobile users: JNU study. An ongoing study on radiation from mobile towers and mobile phones at the Jawaharlal Nehru University (JNU) has found that the exposure to radiation from mobile towers and mobile phones could have an adverse impact on male fertility and also pose health hazards by depleting the defence mechanism of cells.

Though these findings are based on experiments on male rats, Jitendra Behari, a professor in JNU's School of Environmental Sciences and lead researcher for the government-funded project, told The Hindu that the health implications were directly relevant to human beings too. Prof. Behari and his team have been conducting tests on Wistar rats or lab rats, mainly focusing on two aspects of radiation — its effect on the reproductive system and on general health, particularly tumour promotion and genotoxic effects (causing damage to DNA). “Chronic exposure to radiofrequency electromagnetic radiation [RF-EMW] caused double-strand DNA breaks in sperm cells. Prof. Prof. A Short Film That Shows You How Your Brain Breaks When You Do Something You're Not Supposed To Do. A discussion on cell phones and wifi - Nature ,Sustainability and learning ! Is Human Saliva an Indicator of the Adverse Health Effects of Using Mobile Phones? To cite this article:Yaniv Hamzany, Raphael Feinmesser, Thomas Shpitzer, Aviram Mizrachi, Ohad Hilly, Roy Hod, Gideon Bahar, Irina Otradnov, Moshe Gavish, and Rafael M.