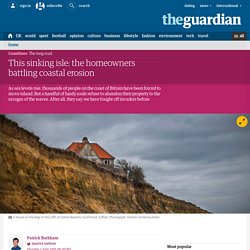 Since Cyclone Xaver struck the Norfolk coast in December 2013, threatening to destroy her bungalow atop the sandy cliffs of Happisburgh, she has been living in a ramshackle caravan perched on what is left of her small paddock. Beyond a temporary “road closed” sign, the asphalt comes to an abrupt end, hanging over a precipice.

The bright yellow cliffs are pockmarked and slumping, constantly worried by the waves. A haphazard path to the beach drops over dark slabs of clay – which looks solid, but crumble to the touch. Norfolk surge: Happisburgh house owner's 'stiff upper lip' A house teetering on the edge of a cliff in Norfolk following last week's tidal surge has been demolished. 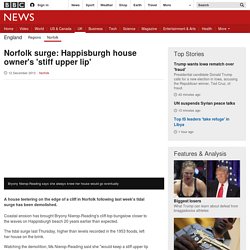 Coastal erosion has brought Bryony Nierop-Reading's cliff-top bungalow closer to the waves on Happisburgh beach 20 years earlier than expected. The tidal surge last Thursday, higher than levels recorded in the 1953 floods, left her house on the brink. Watching the demolition, Ms Nierop-Reading said she "would keep a stiff upper lip but howl her eyes out later". She was the last remaining resident in Beach Road after coastal erosion claimed the homes of all of her neighbours. When she bought the house five years ago she knew that eventually the sea would claim it, but believed she had at least 25 years. "It has happened more quickly than I thought, but I've said 'goodbye' to the house and later when I'm less busy I'll find a quiet corner and howl my eyes out. "Meanwhile, we're British aren't we so I'll keep a stiff upper lip.

" Coastal defences in Norfolk. Introduction In 1949 the Coast Protection Act provided legislation that gave a Coastal Protection Authority the power to carry out whatever work they deemed necessary for the protection of any land in their area. 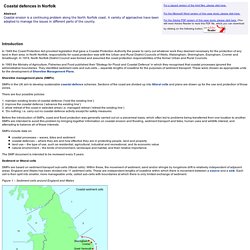 In North Norfolk, responsibility for coast protection was with the Urban and Rural District Councils of Wells, Walsingham, Sheringham, Erpingham, Cromer and Smallburgh. In 1974, North Norfolk District Council was formed and assumed the coast protection responsibilities of the former Urban and Rural Councils. History of erosion and defences at Happisburgh. (extracts from works by Mary Trett, a local historian) The story of the village is inseparably linked with the sea. 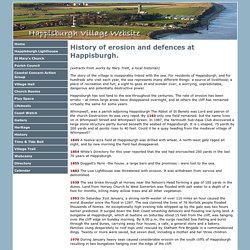 For residents of Happisburgh, and for hundreds who visit each year, the sea represents many different things: a source of livelihood; a place of recreation and fun; a sight to gaze at and wonder over; a worrying, unpredictable, dangerous and potentially destructive power. Happisburgh has lost land to the sea throughout the centuries. The rate of erosion has been erratic - at times large areas have disappeared overnight, and at others the cliff has remained virtually the same for some years. Norfolk’s disappearing village. A bungalow is balanced on a cliff edge. 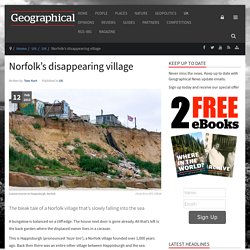 The house next door is gone already. All that’s left is the back garden where the displaced owner lives in a caravan. This is Happisburgh (pronounced ‘haze-bro’), a Norfolk village founded over 1,000 years ago. Back then there was an entire other village between Happisburgh and the sea. The coastline has retreated around 50 metres per decade. ‘The design of our defences was based around timber revetments, but these collapsed and haven’t been replaced, which means we’re in the situation of being an undefended area between two concrete defences,’ says Clive Stockton, former deputy leader of North Norfolk District Council and landlord at the Hill House Pub, where Arthur Conan Doyle once wrote the Sherlock Holmes tale The Adventure of the Dancing Men. Revetments at Great Yarmouth (Image: Becky Stares) After the 1953 North Sea floods, which killed 307 people across four English counties, coastal defences were built up across the Norfolk coast.

Coastal erosion at Happisburgh. Happisburgh, on Norfolk's North Sea coast, is a village with a population of 1400 people in about 600 houses. 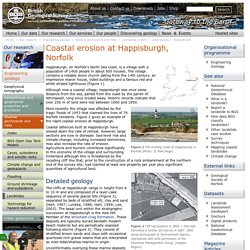 The village contains a notable stone church dating from the 14th century, an impressive manor house, listed buildings and a famous red and white striped lighthouse (Figure 1). Although now a coastal village, Happisburgh was once some distance from the sea, parted from the coast by the parish of Whimpwell, long since eroded away. Historic records indicate that over 250 m of land were lost between 1600 and 1850.