Pain and effects of the pain

Psychological harm of circumcision. American cases from the 1930s Just how sensitive even very young boys can be to interference with their penis was revealed in a paper by David Levy published in 1945. 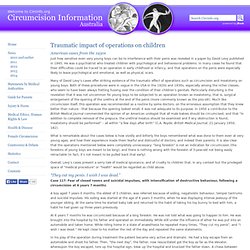 He was a psychiatrist who treated children with psychological and behavioural problems. In many cases he found that their difficulties could be traced to an operation in early childhood or infancy, and that operations on the penis were especially likely to leave psychological and emotional, as well as physical, scars. Many of David Levy’s cases offer striking evidence of the traumatic effect of operations such as circumcision and meatotomy on young boys. Circumcision + Pain Killers = A Decent Video. Lidocaine-Prilocain in Preterm Infants. [If you do not see a blue menu bar on the right, click here. 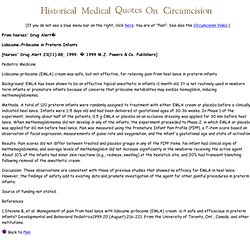 You are at "Pain". See also the Circumcision Video.] From Nurses' Drug Alert Lidocaine-Prilocaine in Preterm Infants [Nurses' Drug Alert 23(11):88, 1999. 1999 M.J. Pediatric Medicine. SICSOCIETY - An Article about Brain Visualization & Circumcision. The First Ache: Bioethics & beginning of life matters. Twenty-five years ago, when Kanwaljeet Anand was a medical resident in a neonatal intensive care unit, his tiny patients, many of them preterm infants, were often wheeled out of the ward and into an operating room. 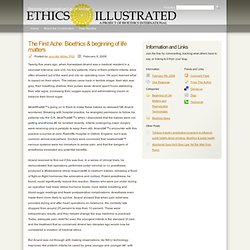 He soon learned what to expect on their return. The babies came back in terrible shape: their skin was gray, their breathing shallow, their pulses weak. Anand spent hours stabilizing their vital signs, increasing their oxygen supply and administering insulin to balance their blood sugar. Infant Pain, Adult Repercussions: How Infant Pain Changes Sensitivity In Adults. Scientists at Georgia State University have uncovered the mechanisms of how pain in infancy alters how the brain processes pain in adulthood. 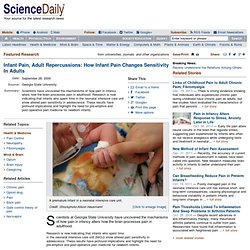 He Didn't Cry: Babies in Shock. Posted in honor of Griffin Starr, who entered this world perfect, suffered infection and breathing difficulties, and was taken from the NICU to be cut this weekend. Neurogenic shock. Infant Pain Impacts Adult Sensitivity. Scientists at Georgia State University have uncovered the mechanisms of how pain in infancy alters how the brain processes pain in adulthood. 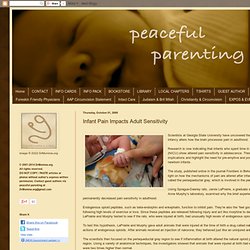 Research is now indicating that infants who spent time in the neonatal intensive care unit (NICU) show altered pain sensitivity in adolescence. These results have profound implications and highlight the need for pre-emptive and post-operative pain medicine for newborn infants. The study, published online in the journal Frontiers in Behavioral Neuroscience, sheds light on how the mechanisms of pain are altered after infant injury in a region of the brain called the periaqueductal gray, which is involved in the perception of pain. Effect of neonatal circumcision on pain response during subsequent routine vaccination. What is done to children they will do to society. Nurse's Rules They Obey for Circs. Infant Wellness / Genital Integrity - John W. Travis, MD, MPH.

Circumcision: How Much Does It Hurt? Reading the article below I had one of those "Well, duh! 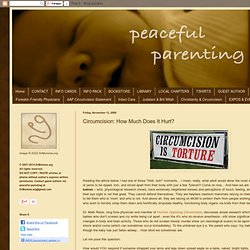 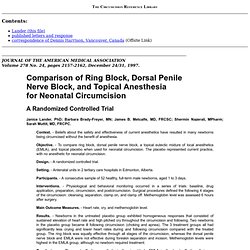 This study is an old one (1997) but we still find that the majority of baby boys circumcised in the United States go under the knife for surgery without anesthesia. 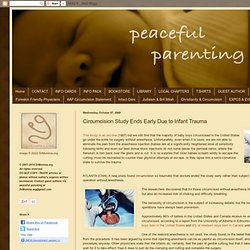 Unfortunately, even when it is used, we are not able to eliminate the pain from the anesthesia injection (babies are at a significantly heightened level of sensitivity following birth) and even our best dorsal block injections do not numb below the perineal nerve, where the frenulum is torn back over the glans and is cut. It is no surprise that most babies scream wildly to escape the cutting, must be restrained to counter their physical attempts at escape, or they lapse into a semi-comatose state to survive the trauma. ATLANTA (CNN) A new study found circumcision so traumatic that doctors ended the study early rather than subject any more babies to the operation without anesthesia. 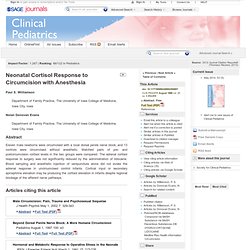 Williamson Nolan Donovan Evans Eleven male newborns were circumcised with a local dorsal penile nerve block, and 13 controls were circumcised without anesthetic. Matched pairs of pre- and postcircumcision cortisol levels in the two groups were compared. The adrenal cortisol response to surgery was not significantly reduced by the administration of lidocaine. Pain. [If you do not see a blue menu bar on the right, click here. 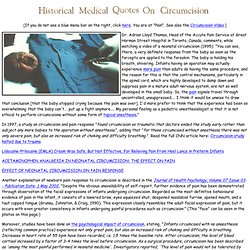 You are at "Pain". See also the Circumcision Video.] Dr. Oral sucrose as an analgesic drug for procedural pain in newborn infants: a randomised controlled trial. Introduction International clinical guidelines recommend that oral sucrose is given to relieve procedural pain in neonates.1 These recommendations are based on results from several randomised controlled clinical trials that conclude that sucrose is effective in reducing pain in preterm and term neonates.2 Because many infants admitted to hospital undergo repeated invasive procedures,3, 4 and because there is increasing evidence of short-term and long-term adverse neurodevelopmental consequences,5—9 assessment of the effectiveness of sucrose analgesia in this patient group is essential. As a result, 44 randomised controlled trials investigating the effectiveness of sucrose analgesia in newborn infants are included in a recent Cochrane Review.2 Methods Study design and patients We undertook a double-blind randomised study on the postnatal ward in the Elizabeth Garrett Anderson and Obstetric Wing, University College Hospital (UCH; London, UK), between Feb 25, 2009, and March 25, 2010.

Levels of cortisol (a hormone released into the blood in response to stress) and behavioral responses were recorded for newborns undergoing circumcision, heel-stick blood sampling, weighing and measuring, and discharge examination. Circumcision resulted in significantly higher levels of behavioral distress and blood cortisol levels than did the other procedures. Since the infant is restrained during circumcision, the response to the use of restraint was similarly tested and was not found to be measurably distressing to newborns. Circumcision is a surgical procedure that involves forcefully separating the foreskin from the glans and then cutting it off.