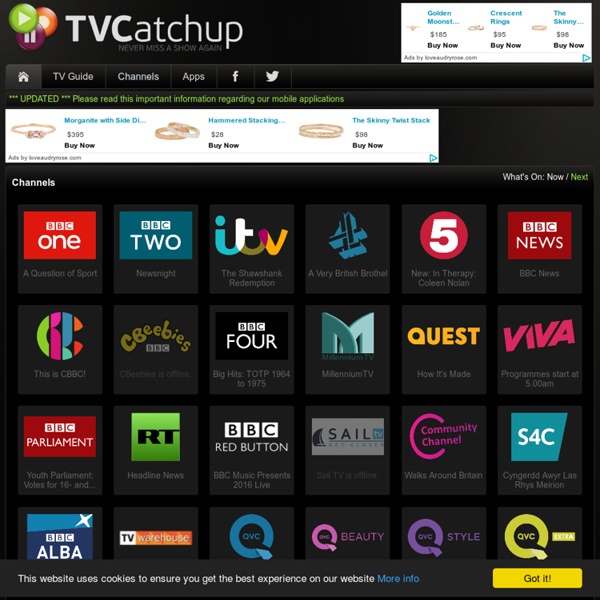 Full Episodes About Watch truTV What is Watch truTV? Watch truTV is a new service that allows you to watch full episodes of your favorite truTV shows anytime, anywhere! You receive FREE, unlimited access to full-length truTV episodes the day after they premiere. Miss a recent episode of Operation Repo or Hardcore Pawn? SurfTheChannel - Home August 28, 2014 Question 1 of 4: How often do you use Mozilla Firefox? Question 2 of 4: How satisfied were you with the previous versions of Mozilla Firefox? Watch UK TV online abroad - My Expat Network 100+ Sites to Download All Sorts of Things These days you can find all sorts of things online, from audio books to flash files, from sound effects to CSS templates. Below we compiled a list with over 100 download sites that serve that purpose. We will also try to keep the list updated, so if your favorite download site is not here, let us know about it with a comment.

Boxee - Watch Movies, TV Shows and clips from the Internet on your TV. Over 500 Social Change Documentaries on 1 Page Just imagine what could become possible if an entire city had seen just one of the documentaries above. Just imagine what would be possible if everyone in the country was aware of how unhealthy the mainstream media was for our future and started turning to independent sources in droves. Creating a better world really does start with an informed citizenry, and there's lots of subject matter to cover. From all the documentaries above, it's evident that our society needs a new story to belong to. The old story of empire and dominion over the earth has to be looked at in the full light of day - all of our ambient cultural stories and values that we take for granted and which remain invisible must become visible. But most of all, we need to see the promise of the alternatives - we need to be able to imagine new exciting ways that people could live, better than anything that the old paradigm could ever dream of providing.

Quality DivX TV & Movies Nietzsche: Beyond Good and Evil A brilliant young man, he was appointed professor at the University of Basel aged 24 having not even finished his degree. His evanescent philosophical life ended 20 years later when he went insane and died shortly afterwards. Nietzsche's argued that the Christian system of faith and worship was not only incorrect, but harmful to society because it allowed the weak to rule the strong - it suppressed the will to power which was the driving force of human character. Nietzsche wanted people to throw of the shackles of our misguided Christian morality and become supermen - free and titanic.