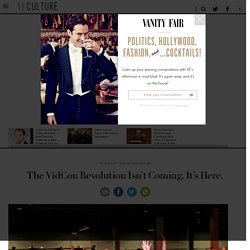 With 200 social-media millionaires and counting, the Internet’s YouTube and Vine stars are minting new fans—and new business opportunities—at a record pace. At the sixth annual VidCon in Anaheim, Richard Lawson dives deep into the youthquake that took over the entertainment industry while everyone over 30 wasn’t looking. The madness of VidCon is not immediately evident. Tencent Partners With HBO to Distribute TV Dramas, Movies Online in China. Netflix is 6% of TV Business, 43% of Ratings Decline – Nathanson. Netflix wants to replace TV, and there’s a growing consensus that Reed Hastings has already started: The new conventional wisdom is that Netflix is the reason behind a mysterious decline in TV ratings that showed up last summer and has stuck around ever since. 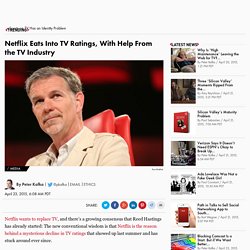 Here’s the latest argument in support of that theory: Netflix, which streamed 10 billion hours of video last quarter, now represents close to 6 percent of total TV viewing in the U.S., says analyst Michael Nathanson. More to the point: Nathanson figures that Netflix accounts for 43 percent of the ratings decline the networks experienced last quarter.

Netflix Aims at TV, Not HBO, Says CEO Reed Hastings. We’ve heard a lot about the battle between HBO and Netflix in recent months, prompted by HBO’s move to offer its own Netflix-like Web service. 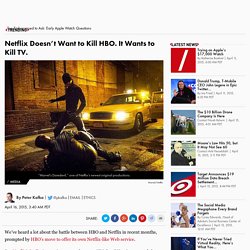 But Netflix’s boffo Q1 earnings yesterday gave CEO Reed Hastings a good chance to remind people what he’s really gunning for: It’s not HBO, it’s TV. Hastings has been quite clear about this for some time. While his company has been happy to use HBO as a competitive benchmark — “The goal is to become HBO faster than HBO can become us,” content chief Ted Sarandos famously announced — Hastings has said, over and over again, that he doesn’t need HBO to fail in order for him to grow.

There’s plenty of overlap between the two services’ customer bases. Netflix Stock Soars $87 Per Share on Day After Q1 Earnings Release. Early investors in streaming service stock just made a boatload of money, as shares reach $562 Netflix shareholders woke up to a pretty good morning — and they could have an even greater afternoon if they already cashed out. 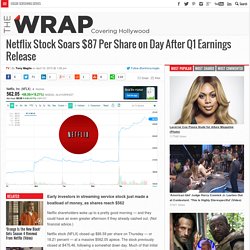 Here’s another reminder why companies like Apple and Amazon are betting on streaming services: Streaming is quickly taking over as the major money-maker for the music industry, with 70 percent of all digital music revenue coming from streaming by 2019, according to an estimate from U.K. 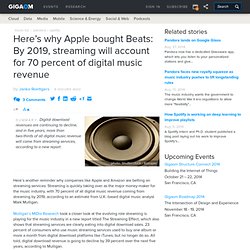 -based digital music analyst Mark Mulligan. Mulligan’s MIDia Research took a closer look at the evolving role streaming is playing for the music industry in a new report titled The Streaming Effect, which also shows that streaming services are clearly eating into digital download sales. 23 percent of consumers who use music streaming services used to buy one album or more a month from digital download platforms like iTunes, but no longer do so. All told, digital download revenue is going to decline by 39 percent over the next five years, according to Mulligan.

Sorry Rihanna, PewDiePie Now Most Viewed YouTube Channel Of All Time. YouTube Revenues Approach TV Mainstays. A recent report from eMarketer says that YouTube is expected to earn more than $5.6 billion in gross revenue by the end of 2014. 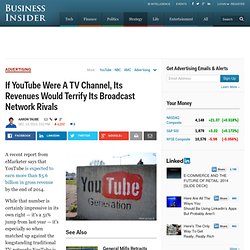 Apple said to be eyeing HBO, Viacom, ESPN as TV partners. Apple is in negotiations with entertainment companies to change the way customers interact with its long-rumored television, according to a new report. 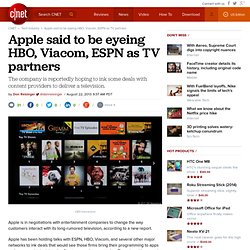 Publications Direct-To-App: Hollywood Tries Freemium 05/16. With Netflix dumping a baker's dozen of TV episodes into the screen-isphere all at once, a la carte TV episode purchases now de rigeur and purchasing games by the level through in-app upgrades, it was only a matter of time before someone released a Hollywood feature via the app model. 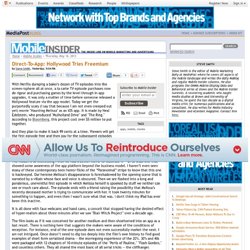 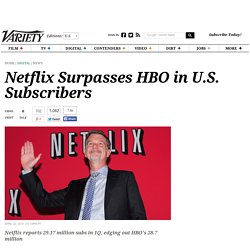 Will Robert Kyncl and YouTube Revolutionize Television? On a rainy night in late November, Robert Kyncl was in Google’s New York City offices, on Ninth Avenue, whiteboarding the future of TV. 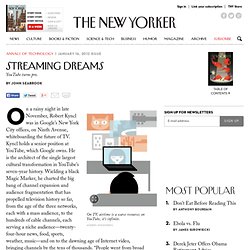 Kyncl holds a senior position at YouTube, which Google owns. He is the architect of the single largest cultural transformation in YouTube’s seven-year history. Wielding a black Magic Marker, he charted the big bang of channel expansion and audience fragmentation that has propelled television history so far, from the age of the three networks, each with a mass audience, to the hundreds of cable channels, each serving a niche audience—twenty-four-hour news, food, sports, weather, music—and on to the dawning age of Internet video, bringing channels by the tens of thousands.

“People went from broad to narrow,” he said, “and we think they will continue to go that way—spend more and more time in the niches—because now the distribution landscape allows for more narrowness.” People prefer niches because “the experience is more immersive,” Kyncl went on. Web Video Goes Big-Time. Roku Hits 5M Streaming Players Sold In The U.S., Has Streamed 8B Videos And Music Tracks. Roku just announced via its blog that it has sold 5 million of its streaming Internet media players since its launch back in 2008. The devices have managed to stream a total of 8 billion pieces of content in that time, impressive for a device that started out as essentially a dedicated Netflix box. Roku recently introduced its third-generation hardware to market with the Roku 3, which went on sale in March. Disney Joins U-Verse's TV Everywhere Universe. AT&T's 4.54 million U-verse TV customers are the latest to gain access to three Disney/ABC Television Group authenticated TV Everywhere apps: Watch Disney Channel, Watch Disney XD and Watch Disney Junior.

The apps, presently supported on iOS and select Android devices, as well as the Xbox 360 gaming console and Kindle Fire tablet and on PC Web browsers, offer the live, linear TV feeds of the trio along with access to on-demand titles in early, "advantaged" windows from a range of Disney series, including Good Luck Charlie, Shake It Up, and Phineas and Ferb. To access the apps, AT&T's IPTV customers must sign-on with their U-verse customer credentials. Adobe Launches Primetime To Facilitate TV Everywhere Services, Signs Up Comcast & NBC Sports As Customers. Adobe has changed the way it sells technology used to enable high-quality streaming services from TV networks and other video providers. With the launch of Adobe Primetime — previously know as Project Primetime — the technology company is providing a suite of tools for video delivery.

Appeals court rules in favor of streaming service Aereo. Skip to main content Browse All Briefs by Topic Appeals court rules in favor of streaming service Aereo Forward to a friend 04/1/2013 | New York Times (tiered subscription model), The · Verge, The · Wall Street Journal, The. Reed Hastings on Arrested Development, House of Cards, and the Future of Netflix: Movies + TV. In the beginning, there was the tube. Accenture: Consumers take control. Next TV: Networks Find Friends on Digital Playground. New York -- Far from cutting out the legs from under TV, Internet-video platforms are providing new avenues for networks and producers to expand their brands -- and can act as a low-cost way to incubate original content.

That was the upbeat sentiment of a panel of industry executives here at Multichannel News/B&C’s Next TV Summit. “Digital, the Web -- it’s another playground to get your content in,” said John P. Roberts, senior vice president of digital media and commercial affairs for production company Endemol USA. Roberts (pictured, above) said Endemol is increasingly looking at “micro-budget programming” to develop shows for Internet distribution that could land on traditional TV. Xbox now Microsoft’s sole TV strategy after selling MediaRoom to Ericsson. Digital TV, movie streaming reaches tipping point. US digital TV and movie content audiences will grow faster than previously expected as a result of increased viewing on tablets and smartphones, a wave of Internet-enabled TVs, and greater content availability, according to a new report – Digital TV and Movie Streaming: A Rising Tide of Devices, Content and Viewing - from digital marketing insight specialist eMarketer.

The number of US digital TV viewers will reach 145.3 million in 2017, up from 106.2 million in 2012, according to eMarketer. The February 2013 figures represent increases ranging from 5.3 per cent to 9.3 per cent more than the corresponding figures in its August 2012 forecast. Digital TV viewers will cross a critical tipping point in 2014, surpassing 50 per cent of the US Internet user population. Apple 'iRadio' service set for summer release, rumors suggest. One of a series of early advertisements for Apple's iPod points to the company's deep connections to the music industry -- but will Apple be able to sell a new digital radio service? Apple Turning Apple into cider is a popular sport these days.

And Apple is certainly experiencing a lacuna in innovative product introductions (where's the Apple television? Televisions in living rooms now the fastest-growing internet platform. The humble television holds the future of the interwebs, we're told: New numbers from Netbiscuits shows the lean-back experience more than doubled over the last six months and put other platforms into the shade.