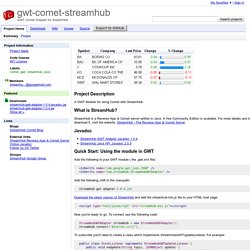 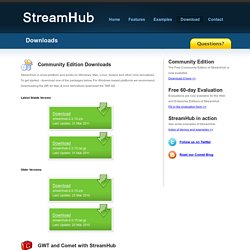 To get started - download one of the packages below. For Windows based platforms we recommend downloading the ZIP, for Mac & Unix derivatives download the TAR.GZ. Latest Stable Version Downloadstreamhub-2.2.10.zipLast Update: 31 Mar 2011 Downloadstreamhub-2.2.10.tar.gzLast Update: 31 Mar 2011 Older Versions. A walking city » Blog Archive » Using Java With The Twitter Streaming API. Twitter recently made a streaming API available that allows developers to get real-time status updates using HTTP streaming. 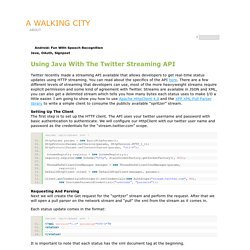 You can read about the specifics of the API here. There are a few different levels of streaming that developers can use, most of the more heavyweight streams require explicit permission and some kind of agreement with Twitter. Streams are available in JSON and XML, you can also get a delimited stream which tells you how many bytes each status uses to make I/O a little easier. I am going to show you how to use Apache HttpClient 4.0 and the XPP XML Pull Parser library to write a simple client to consume the publicly available “spritzer” stream. Setting Up The Client The first step is to set up the HTTP client. Requesting And Parsing Next we will create the Get request for the “spritzer” stream and perform the request.

Each status update comes in the format: <? HTTP Keepalive Connections and Web Performance. Have you ever benchmarked a server in the lab and then deployed it for real traffic, only to find that it can’t achieve anything close to the benchmark performance? 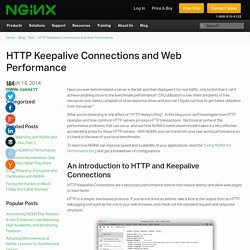 CPU utilization is low, there are plenty of free resources, but clients complain of slow response times and you can’t figure out how to get better utilization from the server? What you’re observing is one effect of “HTTP Heavy Lifting”. In this blog post, we’ll investigate how HTTP operates and how common HTTP servers process HTTP transactions. We’ll look at some of the performance problems that can occur, and see how NGINX’s event-driven model makes it a very effective accelerating proxy for these HTTP servers. With NGINX, you can transform your real-world performance so it’s back to the level of your local benchmarks. To learn how NGINX can improve speed and scalability of your applications, read the Tuning NGINX for Performance blog and get a breakdown of configurations. An introduction to HTTP and Keepalive Connections 1. Channel Java API Overview. Keep the Socket alive (Beginning Java forum at JavaRanch) Surlac surlacovich wrote:Winston, am I right that you consider sending notification to the client when both server and client has Internet but not connected to each other (and close the connection to release Socket right after the data received), is good solution? 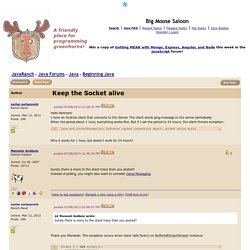 No. If both "ends" have a viable Internet connection, then presumably you can open a channel. Your problem is what to do when one end of that connection (presumably the client) is down. Think about how it works with e-mail: the sender doesn't need to care if you're running or not, s/he simply sends a message to your "post office", whose responsibility it is to forward it on to your Inbox when it receives a message from you saying "Hi, I'm awake". Well, the very same is true of async messaging (which I know JMS - and I'm sure many other messaging protocols - supports).

I'll say it one more time - you don't need an open socket. Winston. CometStream - rupy - How to stream chunks in real-time. - A tiny Java async HTTP application server. HTTP Streaming. From Ajax Patterns Please see discussion page for an alternate approach to HTTP streaming from what is listed below! 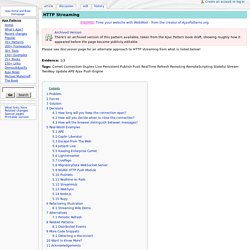 Evidence: 1/3 Tags: Comet Connection Duplex Live Persistent Publish Push RealTime Refresh Remoting RemoteScripting Stateful Stream TwoWay Update APE Ajax Push Engine How can the browser receive events and responses from the server? The state of many web applications is inherently volatile. Stream server data in the response of a long-lived HTTP connection. "Page Streaming" involves streaming the original page response. For example, the server can initially output a div which will always contain the latest news. print ("<div id='news'></div>"); But instead of exiting, it starts a loop to update the item every 10 seconds. <? That illustrates the basic technique, and there are some refinements discussed below and in the Design Decisions. "Page Streaming" means the browser discovers server changes almost immediately.