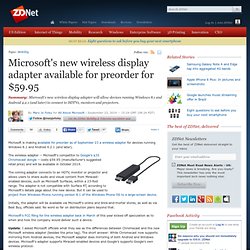 The wireless adapter -- Microsoft's competitor to Google's $35 Chromecast dongle -- costs $59.95 (manufacturer's suggested retail price) and will be available in October 2014. The coming adapter connects to an HDTV, monitor or projector and allows users to share audio and visual content from Miracast-enabled devices, such as Microsoft Surfaces, within a 23-foot range. The adapter is not compatible with Surface RT, according to Microsoft's details page about the new device. But it can be used to project from Windows Phone running version 8.1 of the Windows Phone OS to a large-screen device. Mobile content from Paul Thurrott's SuperSite for Windows. OK, I've had my fun with the dichotomy of Microsoft announced two separate Miracast adapters in the last 30 days. 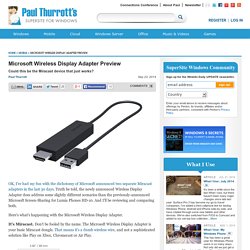 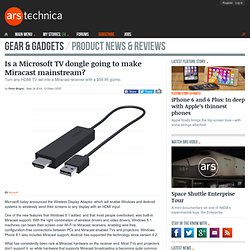 One of the new features that Windows 8.1 added, and that most people overlooked, was built-in Miracast support. With the right combination of wireless drivers and video drivers, Windows 8.1 machines can beam their screen over Wi-Fi to Miracast receivers, enabling wire-free, configuration-free connections between PCs and Miracast-enabled TVs and projectors.

Windows Phone 8.1 also includes Miracast support; Android has supported the technology since version 4.2. Announcing the Microsoft Wireless Display Adapter. Have you ever had something on your phone that you really wanted to show to your friends and family, but they had to huddle around you and your PC, tablet, or smartphone just to show them? 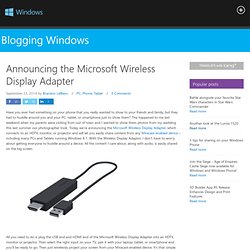 The hidden commands for diagnosing and improving your Netflix streaming quality - Quartz. Chances are that if you are a regular Netflix user, you often wish you could adjust the quality of your video stream. 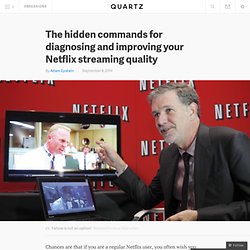 WATCH Disney Channel, Twitch, iHeart Radio and DramaFever for Chromecast. Chromecast has a little something for everyone in the family to enjoy, and today we’re adding even more options for kids, music lovers and gamers. 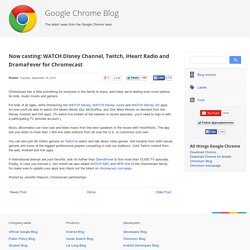 For kids of all ages, we're introducing the WATCH Disney, WATCH Disney Junior and WATCH Disney XD apps. So now you'll be able to watch Girl Meets World, Doc McStuffins, and Star Wars Rebels on demand from the Disney Android and iOS apps. (To watch live stream of the network or recent episodes, you’ll need to sign in with a participating TV provider account.) Music aficionados can now cast and blast music from the best speakers in the house with iHeartRadio. The app lets you listen to more than 1,500 live radio stations from all over the U.S. or customize your own. Apple sets sights on TV after Tim Cook claims its 'stuck in the 70s' Apple’s chief executive made the claims on the Charlie Rose Show in the USHe said Apple is a product the firm ‘continues to have great interest in’But added the concept of TV is ‘stuck back in the seventies’The firm already sells a $99 Apple TV set-top streaming boxRumours claim Apple is also working on its own live broadcast TV set By Victoria Woollaston for MailOnline Published: 12:30 GMT, 15 September 2014 | Updated: 13:42 GMT, 15 September 2014 Rumours of an all-in-one Apple TV set, that will broadcast live shows, has been on the cards since 2011 - but another launch event has passed without it making an appearance. 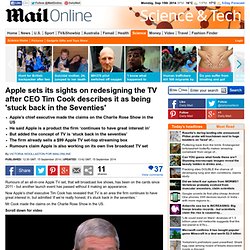 Now Apple’s chief executive Tim Cook has revealed that TV is an area the firm continues to have great interest in, but admitted ‘if we’re really honest, it’s stuck back in the seventies.’ Mr Cook made the claims on the Charlie Rose Show in the US. Apple's Tim Cook: TV is TERRIBLE and stuck in the SEVENTIES. The essential guide to IT transformation Some might fondly remember the era which bought us The Clangers, Fawlty Towers and The Sweeney. 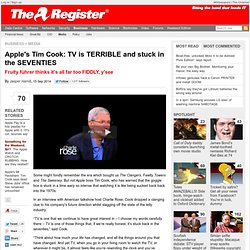 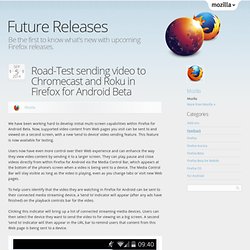 Now, supported video content from Web pages you visit can be sent to and viewed on a second screen, with a new ‘send to device’ video sending feature. This feature is now available for testing. Users now have even more control over their Web experience and can enhance the way they view video content by sending it to a larger screen. They can play, pause and close videos directly from within Firefox for Android via the Media Control Bar, which appears at the bottom of the phone’s screen when a video is being sent to a device. Road-Test sending video to Chromecast and Roku in Firefox for Android Beta. First set of Android apps coming to a Chromebook near you. Millennials are forcing change on the TV industry—and making it better - Quartz. This post has been updated. 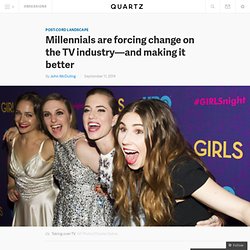 Will September, 2014 go down as the month Hollywood finally figured out millennials? Here has what has happened in the past few days: Time Warner, the owner of HBO, made its most encouraging comments yet on the prospect of it unshackling HBO Go. Searching for "netflix" on Netflix now brings up all of its original programming. Handy! Exclusive: All Seven Seasons Of ‘Gilmore Girls’ To Be Released On Netflix. The streaming gods have finally answers our prayers! Starting October 1st, Netflix will be releasing all seven seasons (that’s 153 episodes!) Of Gilmore Girls to stream binge-watch our little hearts out.

Modal Trigger Earlier this week, Decider asked the Twitterverse what series they wish they could binge-watch on Netflix. Verizon’s Internet TV Service Eyes 2015 Launch, CEO Says. CEO Lowell McAdam offered a few more details this morning about Verizon’s plan to offer a TV-like service over the Internet, a market that Sony and Dish Network also hope to lead. The telco expects by mid-2015 it will offer mobile users a “bundle with major broadcast providers” plus a collection of “custom channels,” he said today at the Goldman Sachs Communacopia conference. “It’s the Big 4 for sure, and I would tell you that the very exciting part of this is some of the digital media out of the West Coast” including DreamWorks Annimation’s AwesomenessTV “that really goes after the millenials. HBO is now “seriously considering” whether to offer HBO Go without cable TV - Quartz.

It really might happen. Just not quite yet. Time Warner CEO Jeff Bewkes made his strongest comments yet about the possibility of selling standalone subscriptions to HBO Go, the network’s streaming service. At the moment, the internet service for the premium channel behind Game of Thrones and a long list of other hit shows is only available through some form of pay TV subscription. HBO has been experimenting with cheaper packages that barely require pay TV but are still sold through Comcast, Time Warner Cable, and others. Millennials are forcing change on the TV industry—and making it better - Quartz. Stream Engines: How To Choose Between The Apple TV, Roku 2 And Chromecast - ReadWrite.

ReadWriteShop is an occasional series about the intersection of technology and commerce. Sure, you can stream Netflix shows or movies on your laptop or tablet. But if you've got a big screen TV sitting in your living room, chances are you'd like to use it. Exclusive: this is Android TV. ▶ How to stream media from your PC to your HDTV over WiFi. Nik keeps his PC downstairs. Android TV is Google's latest shot at entertainment glory (hands-on) For Android, smartphones and tablets are only the beginning. Google believes that there are so many other categories of hardware that could benefit from its mobile OS, so it announced that it's building extensions of Android onto the TV, car and smartwatch.

▶ How to Stream Digital Media From Your Windows 7 PC. With the immense popularity of digital cameras, smartphones, and tablets for taking pictures and capturing video, and the wide availability of affordable digital music and movies, many people have amassed enormous collections of digital media. What’s All the Hoopla - Spokane County Library District. Posted on January 13, 2014 at 6:00 am The hoopla is all about music, movies, and TV shows streaming to you instantly – and for free – with your library card! This is the new show Netflix is most excited about - Quartz. Roku 3. Harmony Smart Keyboard Remote. System Requirements Required for Setup: Harmony App (download from Apple App Store or Google Play) iPhone® 4S or later, iPad® (3rd generation or later), iPad Mini®, iPod touch® (5th generation or later) with iOS 6.0 or higheror Android device with Android 4.0 or later Bluetooth* Internet access Wi-Fi***Bluetooth LE for iOS, Bluetooth 3 or 4 for Android.

**Wireless range may vary due to environmental and computing conditions. 10 New And Returning Original Series Coming To Netflix In 2014. Behind the curtain: How Netflix streams movies to your TV. At peak times, Netflix accounts for around a third of the consumer Internet traffic in North America. The future of TV is coming into focus, and looks pretty great - Quartz. The future of TV is here. ▶ How to stream media from your PC to your HDTV over WiFi.